Has Canelo Alvarez Made a Mistake?

If Canelo Alvarez thinks he’s meeting the same Callum Smith who narrowly outpointed John Ryder a year ago, the Mexican and his team have another think coming.

Smith’s trainer, Joe Gallagher, said this week that their short notice preparation is going just fine and that the pound-for-pound claimant better not be overlooking the world’s leading 168lbr.

Gallagher said that ideally the Liverpool star would have fought in March or April, or even in September, just a few of the dates that were mentioned before and as coronavirus wreaked havoc with 2020’s boxing schedule.

Instead, he goes in to the biggest contest of his life on the back of a fight that gave more questions than answers, against Ryder last year.

Gallagher points to the scorecards that had Smith a worthy winner and the talk of that controversy now has to stay in the past as they look to Canelo in Vegas on December 19.

“Callum Smith has performed, you go through the resume,” said Gallagher. “His eighth fight, Patrick Mendy, a very good Patrick Mendy, English title, knocked out in one round. Domestic blockbuster, local derby with Rocky Fielding, one round. Hadillah Mohoumadi, just lost to James DeGale over 12 rounds, knocked out one round. Then [Smith] fought George Groves, seven rounds. Hassan N’Dam, the biggest stage, New York, Madison Square Garden, just beaten Martin Murray, knocked out in three rounds. John Ryder? I’m not saying he wasn’t motivated but was he training as hard as he’d train for Canelo? You’d have to ask him that. But did he look at John Ryder as ‘Jack Arnfield’s beaten him, Rocky Fielding’s beaten him, Billy Joe’s beaten him…’ No fear factor. If people are banking on the Callum Smith who fought John Ryder showing up for this they’re making a mistake.”

DAZN have been in filming with Team Smith this week but Gallagher is keeping a close eye on Smith’s media workload, particularly because the Alvarez fight has come at just five weeks’ notice. 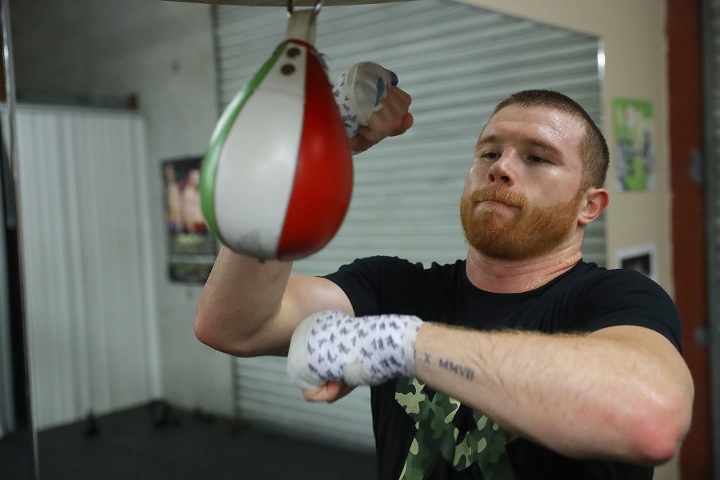 Gallagher and co knew they were in the frame for it, but they hadn’t banked on it actually happening.

“It was beginning to feel like when [Floyd] Mayweather was choosing between [Marcos] Maidana and Amir Khan and whenever Mayweather would fight Amir’s name would be mentioned as a carat and we felt we were beginning to be used as a name like that, always being the bridesmaid, never the bride,” continued Gallagher, knowing that fighters from Caleb Plant to Billy Joe Saunders have also been discussed.

“Even on the morning of the announcement we were like, ‘Who’s he announcing? Because there’s no contract signed and it surely isn’t us, it must be [Caleb] Plant’. And it was only 15 minutes before the announcement the deal was done and we had to watch the announcement to make sure the words ‘Callum Smith’ came out of his mouth.”

Since then the intensity of camp has been ratcheted up. Smith was training anyway, but knowing it’s Canelo has made him step things up.

“We were in the gym because we said we had to fight by the end of December. When they said it could be Canelo we said, ‘Here we go again’.  Training for a list of fighters, as Ricky Hatton would say, if you’re fighting Kostya Tszyu, you’re running that little bit harder, you focus that little bit more, you hit that bag a little bit harder so we were training but who and where was always the unknown,” Gallagher added.

“The flipside of it, which I think is positive for Callum, is we’ve got this instead of a 10-12 week build up, [when we’d be] talking about Canelo, doing interviews, talking on videos, you’d could get to fight week and be mentally drained with it, as a fighter.”

Gallagher is looking at the positives of an unusual situation. Usually the build-up to a Canelo fight would be months rather than weeks but Gallagher is happy with where Smith is.

“Everything’s going well,” said the trainer. “He’s had another good week and another good sparring day today, he’s just had his Board check weigh and everything’s good. We’re in a good place. We’re flying next Thursday and you don’t realise how bad a pandemic affects you until you start looking at flights and you’re travelling to America. We thought we might be able to go direct, or maybe have one stop, but it’s turning in to Manchester-Amsterdam-San Antonio or Heathrow-Dallas-LA, whichever way we go. That’s why we are going an extra day or two early, so we can get over it, get training, get ready and start fight week on the Monday.”

Coronavirus has also meant that Smith has not been able to get in the sparring Gallagher would have wanted, in an ideal world.

“Like anything, the sparring that we would have wanted from America or Europe we can’t bring in, so there isn’t anyone who can replicate him [Alvarez] in the source-pool that we’ve got but there’s fighters out there who can do bits like him and if you put those four or five together then we’ll get one,” he explained. “That’s what we’re trying to do now because that’s all that’s available but the people that we’re bringing in are doing what we’re asking of them and trying to mimic him [Canelo] as best as they can.”

And then, on top of the sparring there’s the strategy. Canelo has shown plenty of different wrinkles in his 56 pro fights.

“On the training side of it, which Canelo is going to show up?” asked Gallagher. “Is it the high tempo who made a fast start against Liam Smith? Is it the front foot version from GGG 2? Is it the back foot from GGG 1? Is it the slow train out the station coming on strong down the straight with Kovalev? It’s all those Canelo’s we’re having to prepare for. Is it the slick head movement [he did] against Daniel Jacobs? There’s lots of things to try and get in to four or five weeks and we could sit and moan about that, but we’re not. But the fact that we’re going to fight the No. 1 fighter in the world and all credit to Callum. Currently, people are saying they’ll wait until next year, they’ll wait until there’s more money, obviously Canelo and Callum could have got more money, they could have sold 80,000 seats but Callum said, ‘We’ll go and fight him and it is what it’s going to be’.”

Instead, Gallagher says Smith is in his prime at 27-0 and that he doesn’t have wear and tear. And while it’s a big occasion for Callum, it will be unique for the Mexican.

[QUOTE=frantic fighter;20929049]Canelo will be just fine. If Smith having a lackluster skirmish with Ryder wasn't bad enough. He got the call to fight Canelo four weeks out from the fight. No way a guy that big has an easy cut,…

The only people who think he made a mistake are from England. Canelo’s ring generalship & IQ is far above whats his name?