Like numerous boxing events in the United States, the Canelo Alvarez-Billy Joe Saunders fight has been postponed indefinitely due to the coronavirus outbreak.

Alvarez and Saunders finalized a deal recently for a fight May 2 at T-Mobile Arena in Las Vegas. The promotion of their 12-round fight for Saunders’ WBO super middleweight title was supposed to start Tuesday with a press conference in Los Angeles.

BoxingScene.com was informed Monday, though, that the Alvarez-Saunders card has been pushed back until at least sometime in June. It’s possible that it’ll take place even later than June, depending on how long the coronavirus pandemic impacts large gatherings in the United States. 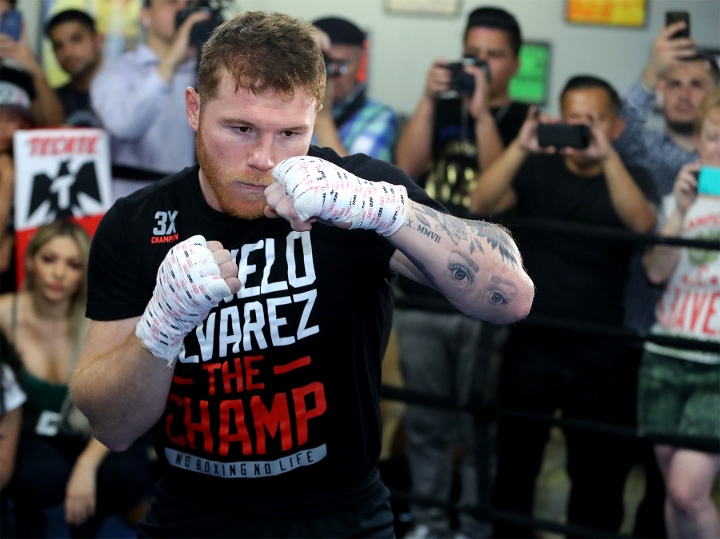 MGM Resorts International, which will host the Alvarez-Saunders show whenever it takes place, announced Sunday night that its casinos and hotels in Las Vegas and elsewhere will close Tuesday for an undetermined amount of time. At least temporarily, MGM Resorts International won’t take reservations for any of its hotels for stays that begin before May 1, the day before Alvarez and Saunders were supposed to fight at T-Mobile Arena.

MGM Resorts International also is the co-owner of T-Mobile Arena, the home venue for the NHL’s Las Vegas Golden Knights.

The Nevada State Athletic Commission determined during an emergency meeting Saturday that all boxing and mixed martial arts events scheduled through March 25 were postponed. The NSAC likely will postpone shows scheduled for beyond that date at its next regularly scheduled meeting, set for March 25 in Las Vegas.

Alvarez-Saunders is the highest-profile boxing event in the United States affected thus far by coronavirus concerns.

Golden Boy Promotions, which represents Alvarez, Matchroom Boxing, Saunders’ promoter, and DAZN will monitor the coronavirus pandemic closely before determining an appropriate date for that fight. They want to avoid postponing it once it is officially announced.

Golden Boy, Matchroom and DAZN intended to announce Alvarez-Saunders for May 2 last week.

Mexico’s Alvarez and England’s Saunders were already training in San Diego and Las Vegas, respectively, before their promoters decided to push back their fight from May 2.

Whenever they square off, Alvarez (53-1-2, 36 KOs) will try to add another super middleweight title to his long list of accomplishments.

Another Brit, Callum Smith, remains the WBA’s legitimate super middleweight champion. The 29-year-old Smith (27-0, 19 KOs), who won that title by stopping George Groves in the seventh round of their September 2018 bout, had stopped Fielding in the first round three years prior to Alvarez beating him.

Smith was among the opponents Alvarez considered before he chose Saunders (29-0, 14 KOs), a southpaw who has won world titles in the middleweight and super middleweight divisions.

In his last bout, Saunders knocked out Argentina’s Marcelo Coceres in the 11th round November 9 at Staples Center in Los Angeles. Saunders trailed on one scorecard before he knocked down Coceres (28-1-1, 15 KOs) three times and stopped him in the 11th round.

S[I]hi[/I]t, I want this fight badly. Damn! For the information for the members here is that Canelo lost two (2) May dates in his career. :damnit1:

[QUOTE=Liondw;20465850]This fight was never even confirmed. Oh well, at least we saw the big fight of the year before the virus pandemic, when Fury tko'd Wilder.[/QUOTE] Not to the public, but Hearn confirmed it was signed and both guys were…

This is good. Saunders gets more time to get in shape and prepped. It would be like if Canelo vs BJS had been officially announced in February