“There was something special about him, he had always thought, someday, somewhere...I would never admit it to a soul, but I always thought there was going to be an extra destiny coming my direction.” This was the internal dialogue of Sergius in Norman Mailer’s classic The Deer Park, a gripping tale of desire and self-discovery in the vast cactus wilds of the Coachella Valley, set in a fictional Palm Springs, renamed Desert D’Or.

On Saturday night, Andrew Cancio finally found his gold in the desert, two years after resigning to the idea that boxing wasn’t for him anymore. More than anything, he found the version of himself he always wished he could become.

Cancio knocked out WBA super featherweight titlist Alberto Machado in what can fairly be described as one of the most remarkable boxing upsets in recent memory. With odds set at 16-1 by the most generous of oddsmakers, the sight of Cancio crumpling Machado with a body shot knockout was the most unlikely of results.

The 30-year old was seen as a challenger who was given a shot for long and meritorious service, rather than one who could truly threaten the champion. Machado, a fearsome power puncher who was coming off a string of devastating performances, was thought to have been served up another victim. After all, his opponent wasn’t even a full-time boxer.

When Cancio received the call from his manager with the news that he had a chance to fight for a world title, he was at his day job at the Southern California Gas Company, where he works as a construction technician, fixing gas leaks and jackhammering roads. Perhaps the only vocation more unthinkable to the common person than getting punched in the face for a living is jackhammering molten pavement in the oppressive desert heat, and Cancio holds both of them.

Every morning, Cancio wakes up at 4:30 and runs between 4.2 and 5 miles. After that, he goes to work from 6:30 until 3:00 in the afternoon. Once he’s done hammering the concrete, he gets in his car and drives the very roads he helped pave all the way from Blythe to Oxnard, California. 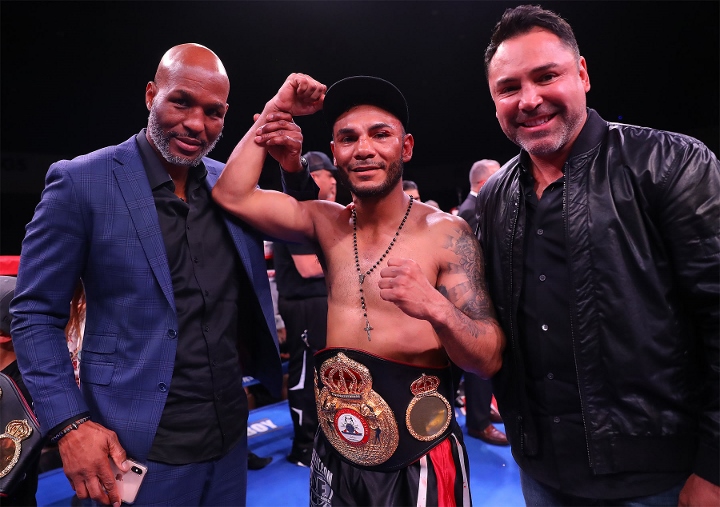 If that sounds overwhelming, it’s because it is, even for someone with the resolve of Cancio. He admits to being exhausted before he even gets to the gym many days—if he’s even able to get there. When he is on-call for the company, he often can’t make the trip to Oxnard, and has even had to cancel scheduled sparring sessions last minute because he couldn’t get out of work.

Two years ago, the frustration boiled over after a 2016 loss to JoJo Diaz, the fourth of his career, and “Chango” the boxer briefly decided he would just be Andrew, the laborer.

“I said I’m done. I was f---ing tired, and I didn’t want to start all the way from the bottom again,” said Cancio.

It would be nearly two years before he would return to the ring in 2018.

That a boxer also maintains a day job is not in and of itself an unusual occurrence. Most professional boxers cannot survive on the income they generate from fighting. In fact, many fighters don’t even see five figure paydays until they’re at least top level prospects on lower tier television broadcasts. As a result, most fighters who aren’t lucky enough to have a managerial or promotional stipend or advance to live off of are either roughing it, or pulling in money from full-time or side gigs.

As much as boxing allows for the possibility of success for people of all walks of life, privilege does play a factor in the fight game. Being able to train full-time and arriving at the gym without the physical or mental burden of alternate employment is a luxury. In Cancio’s case, it’s perhaps less a case of desperation as it is one of practicality. As a single father of two children, relying solely on a dangerous freelance occupation isn’t necessarily a wise decision. His day job allows him to provide medical and dental benefits for his children.

“Maybe if my manager does his job and starts getting me these million dollar paydays, then I can quit,” Cancio playfully jokes with his manager. “He only has one job!”

But Cancio’s practicality still leaves room for ambition. When you’re in the middle of the valley, 300 miles from Hollywood, blanketed by a surreal skyline of mountains, an endless landscape of fecund vegetation and incredible rock formations as far as the eye can see, and a wall of peaceful silence, it’s hard not to dream just a little.

On fight night, Machado arrived at the arena nearly two hours after he was expected to, forcing him to rush his preparations, particularly after an early knockdown in the Rey Vargas-Franklin Manzanilla bout. Meanwhile, Cancio, who literally had a coworker cover his shift on Saturday so he could go fight for a world title, arrived early, easing his nerves and going over his game plan.

In the first round, it appeared that the fight would go as it was planned by the prognosticators. Machado leveled Cancio with a hook and an uppercut, sending him to the mat with his skin, weathered from hundreds of minutes of ring wars and hundreds of hours in the sun, lacerated and dripping blood. It would have been an easy place for Cancio to lay down—a nice lump sum in the bank, and the ability to say he once fought for a world title are more than enough for most people to rest upon.

Instead, as Cancio looked up at the ring lights, perhaps he remembered the stars in the valley sky—the ones he sees every morning as he runs, the ones he sees again on his drive home from Oxnard, the ones he wished upon, and realized his destiny was not a far away dream anymore, but that it was right in front of him, for better or for worse.

So he got up and he did what he does every single day.

“I hit him hard and I started to dig, dig and dig,” said Cancio.

Sometimes, if you just keep digging, you might strike gold.

What a great story from a great fight. Cancio was a bulldog on fight night, I hope he gets a couple easy touches and then Tank. However, I'm guessing Tank would rather fight 122 pounders and 19 year old kickboxers…

Cancio is a real life Rocky story. I hope he makes good bank for his first title defense.

"Perhaps the only vocation more unthinkable to the common person than getting punched in the face for a living is jackhammering molten pavement in the oppressive desert heat, and Cancio holds both of them." Great story.

Great story. For all the underdogs out there.