Then, of course, there’s the possibility of his facing Canelo Alvarez in what clearly would be the biggest fight of Smith’s career.

“I believe at 168 [I can] fight some of the champions, hopefully wait for the Canelo fight,” Smith told DAZN’s Ak & Barak following an open workout Tuesday in Manhattan. “And then, when I’m fully satisfied, then move up to 175. One, seven-five is definitely a possibility, but there’s still stuff to achieve at 168. So, I’ll stay at 168 for as long as I can.” 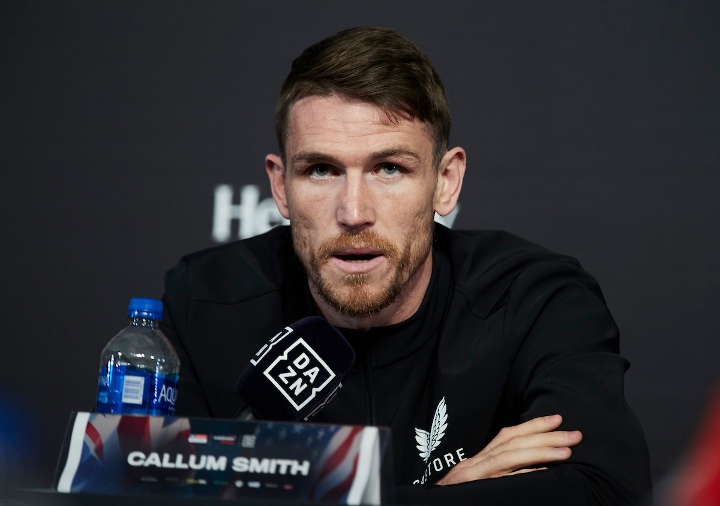 Alvarez and his promoter, Oscar De La Hoya, expressed interest in moving back up to challenge Smith (25-0, 18 KOs) in the aftermath of Alvarez’s unanimous-decision victory over Daniel Jacobs on May 4 at T-Mobile Arena in Las Vegas. Smith might have to wait to meet Mexico’s biggest boxing star because Alvarez (52-1-2, 35 KOs) could be headed for a third fight versus middleweight rival Gennady Golovkin in September.

Kazakhstan’s Golovkin (38-1-1, 34 KOs) must get past Canadian underdog Steve Rolls (19-0, 10 KOs) on June 8 at Madison Square Garden to keep a third fight against Alvarez in play.

Smith, meanwhile, is focused on his own fight at Madison Square Garden. The 6-feet-3 Liverpool native will make the first defense of his WBA “super” 168-pound crown against Cameroon’s Hassan N’Dam (37-3, 21 KOs) on the Anthony Joshua-Andy Ruiz Jr. undercard Saturday night (DAZN).

“The fight you’re speaking about with Canelo, I slip up Saturday night, they don’t happen,” Smith said. “They’re gone. So, that keeps me motivated. I have to come through this weekend to keep them possible, massive, massive fights alive. So, I’m fully focused on June 1st. Then, it’s exciting to be entering the ring as a world champion for the first time. So that’s giving me a little buzz as well. I’m in a good place. I’ve had a very good training camp and I’m ready to perform.”

“I think 175 is a very good division,” Smith said. “It’s very interesting because there’s no standout, No. 1. They’re all probably as good as each other and if they were all to – if four champions went to a tournament, I don’t know who I’d back to win it. They’re all pretty good and pretty similar. But, you know, it’s a very good division and one that I look forward to entering in a year or two’s time. But 168’s my division now and I wanna stamp me authority on it.”

[QUOTE=Sosay;19788656]Damn, come on Callum! Fight BJS, Benavidez next, then go to 175. 168 isnt very good atm anyway. Nelo fight wont be soon, so get in the mix at lightHeavyweight[/QUOTE]says who? after andrade what's left for clenelo at 160 especially…

[QUOTE=Sosay;19788658]Charlo and Andrade wanted and signed for GGG & BJS. Both were willing to fight tough fights b4 Nelo. Not their fault that those fights didn't happen. GGG refused and BJS got busted.[/QUOTE] Willing and doing are a bit different.…

[QUOTE=jonnyc420;19788650]You left out Charlo.[/QUOTE] Charlo and Andrade wanted and signed for GGG & BJS. Both were willing to fight tough fights b4 Nelo. Not their fault that those fights didn't happen. GGG refused and BJS got busted.

Damn, come on Callum! Fight BJS, Benavidez next, then go to 175. 168 isnt very good atm anyway. Nelo fight wont be soon, so get in the mix at lightHeavyweight