Dangerous light heavyweight puncher Callum Johnson is looking ahead to a big year in 2020.

He's hoping to secure a crack at WBA world champion Dmitry Bivol before the end of the year. The fight was being discussed for 2019, before a shoulder injury was plaguing Johnson.

If he's unable to secure Bivol, then Johnson would target a big domestic showdown with undefeated Joshua Buatsi. 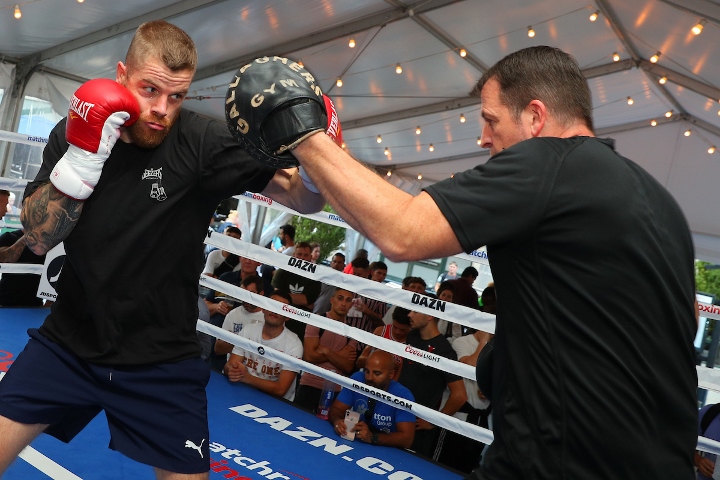 Johnson is being lined up for an EBU world title fight with Igor Mikhalkin. The date and venue for the bout is expected to be announced shortly.

"I would happily step aside from the European title, if that fight [Bivol] was available," Johnson told Sky Sports.

"I'm training to fight in March, whether it be for the European, or whether it will be Bivol, if that happens. It was mentioned about fighting Bivol, but again nothing has been mentioned recently. As far I know it's the European, but we'll see. I should find out very soon."

Johnson is viewed as one of the biggest punchers at the weight. He challenged IBF champion Artur Beterbiev and dropped him hard, before Beterbiev battled back and closed the show in the fourth round.

Johnson is very impressed with Bivol, but he's not that worried about his punching ability.

"He put a couple away early on and he was getting this reputation of being this fearsome monster, a bit like Beterbiev, but I never really saw it myself anyway," said Johnson.

"His boxing ability is second to none. He's very, very good, but I don't see him as being this strong, powerful monster that people have said he is. I feel as though I could get to him, unsettle him and drag him somewhere he's not been before. We'll have to see how he reacted to that."

And if Bivol won't come to the table, there is always Buatsi.

"It's a massive fight for Britain," said Johnson. "It's going to happen. I don't think it's a question of if, it's more of a question of when. But, again, we've both got to win our next fights and then I'm sure towards the back end of the year, there could be a big showdown there."

Bivol was never considered as the "strong, powerful monster"

The EBU title has no value for a guy like CJ so let's hope a bigger name/belt becomes available. An undervalued fighter who could've had the mighty Beterbiev out of there had he been more ruthless.

Buatsi is still very raw in my book.

I'm good with either option for him