Caleb Plant hasn’t fought in nearly 11 months, hasn’t beaten someone as good or as accomplished as Jose Uzcategui and is listed as a big underdog entering their fight.

None of those factors have impacted Plant’s confidence. The unbeaten contender is looking forward to proving what he has believed all along – that he is a championship-caliber fight that belongs in the position he’ll occupy Sunday night.

“I’m happy and blessed to be on this stage,” Plant told BoxingScene.com. “PBC just signed a big, ole deal with FOX to present a lot of our talent. So, it’s a great platform. At the same time, I know it’s exactly where I’m supposed to be. I know I’m made for this, these type of lights. So, I feel like I was born to do this. I don’t feel out of place. I don’t feel nervous.” 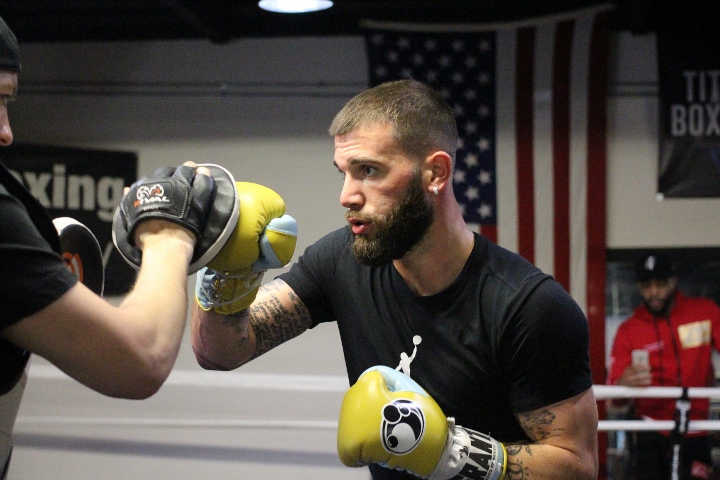 Uzcategui and Plant have had a lot of harsh words for one another throughout the buildup to their 12-round fight for Uzcategui’s IBF super middleweight title. They’ll settle their differences in the ring during the main event of an FS1 telecast from Microsoft Theater in Los Angeles (8 p.m. ET/5 p.m. PT).

The 26-year-old Plant (17-0, 10 KOs), of Ashland City, Tennessee, is the mandatory challenger for Uzcategui’s title.

“We’ve had a great camp. On top of that, I’ve never been one to have bright-lights syndrome and get worried about the lights, the cameras or the crowd. I’ve always enjoyed that, and the bigger it gets, the more I feel like it brings the best out of me.”

Venezuela’s Uzcategui (28-2, 23 KOs) has lost twice – by disqualification to Andre Dirrell (26-3, 16 KOs) and by unanimous decision to Matt Korobov (28-2, 14 KOs). Korobov’s victory provided evidence that the aggressive, rugged champion can be out-boxed.

Unlike Korobov, Plant isn’t a southpaw. That didn’t prevent Plant from taking encouraging things from the Uzcategui-Korobov bout in June 2014.

“I feel like I’m just the whole package,” Plant said. “I feel like I have the physical attributes, as far as the reflexes, the foot speed and hand speed. I also have the boxing IQ. And I know I have the mental fortitude some of these bigger names that he has fought, they haven’t had that, and they have shown that in previous fights, before they fought him, that they don’t the mental fortitude, that when the going gets tough, they don’t get going. They look for ways out. And if anyone thinks that I’m that type of person, then they don’t know me, they don’t know my story and they don’t know where I come from. So, I know he’s a rough, rugged dude, I know he’s coming to win, I know he wants to keep his belt. But that’s a tall order for him.”

Impressive win. Uzcategui looked tentative and had no real game plan. I had it 115-111.

I've only seen him a few times but have been impressed every one of those times. If he wants to win this fight he needs to be able to hurt Uzcategui, although I'm not sure he can really do that…

I have no opinion on this one, except to say I like the match up. I usually will lean "boxer" over "puncher" so that is Plant, but I also lean "active" over "inactive" which is Uzi. *flips coin*

Plant has a boxer's chance, but he has to stay off the ropes, and out of the corners. Uzi wins the power game, but movement makes him stiffen up.