The 29-year-old Londoner nicknamed ‘Wise Guy’, returns to the ring this Saturday night on the Dillian Whyte-Joseph Parker card four months on since losing his British light heavyweight title.

That night at London’s O2 Arena, where Buglioni fights this weekend, saw him beaten in just one round by Commonwealth 175lbs champion - and fellow Matchroom fighter - Callum Johnson. It was Buglioni’s third defeat of his career having lost – at super middleweight - to Sergey Khomitsky and Fedor Chudinov. 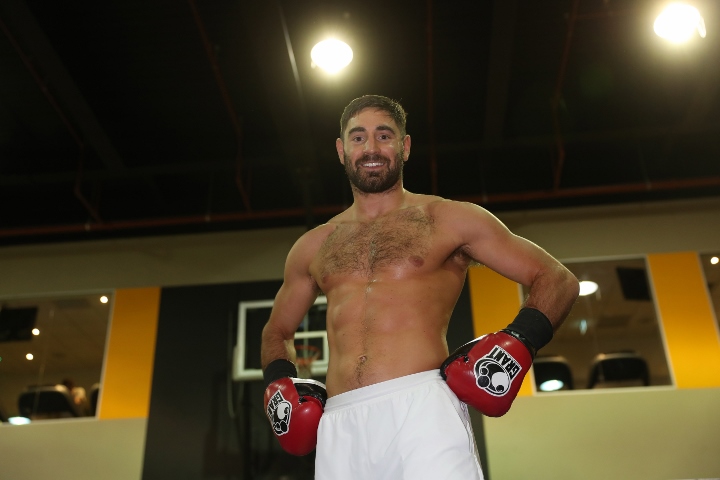 Nowadays, Buglioni is a much more robust figure, mentally, and found himself getting over the Johnson loss the week after it happened.

“I looked back, reflected upon it. My training camp was phenomenal. I was in good shape. I was very confident, perhaps a little too over confident,” said Buglioni, to Boxing Scene, reflecting on the defeat to Johnson who will now challenge Artur Beterbiev for the Russian’s IBF world title on October 6 in Chicago.

“I landed the first good right hand, foolishly rushed in, took a good shot myself and Callum Johnson did what he had to do. He come in, he landed the shots, he started fast, and I think that was their tactics looking at the Scott Cardle fight as well. Note: Cardle fought big punching British lightweight champion Lewis Ritson on the same show, losing in round two.

“(Johnson’s trainer Joe) Gallagher’s obviously saying ‘Look, go out there and stick it on him, try and upset him early and go from there.’ It didn’t work for Scott Cardle but it paid off for Callum Johnson and he showed good explosive power, kind of very fast early on and he got the victory.”

A relaxed Buglioni is at ease with everything in his career. With a strong support network behind him including his family and girlfriend he is more than prepared to enter the fold once again, regardless of whether the opportunity is at British or European level.

“I’ll take whatever opportunity comes my way now. It hasn’t changed my confidence, my outlook. It’s one of them things, you go in with a big puncher these things can happen.”

Buglioni finds comfort in the fact that some of the greats of our sport have been put down only to rise again and find glory somewhere down the line. And while his compatriot Rocky Fielding may not go on to be a super middleweight legend he is a shining example of what can be achieved, having lost in one round to Callum Smith in 2015 to then go on and win the WBA regular world title at 168lbs two and a half years later.

We asked the Don Charles trained fighter whether or not he was tempted to leave the domestic scene behind having been British champion. The answer swerved into Buglioni proving again how at peace he is with past defeats and is prepared to work even harder and continue to learn in pursuit of some of boxing’s biggest prizes.

“Against Khomitsky, obviously I was stopped but my training camp and making the weight in that fight wasn’t great. I wasn’t the right fighter. I fought Chudinov. Big punchers, good solid fighters but I was in there and I wasn’t hurt. But you get caught cold, you get hurt early around the top of the head anyone can be hurt, anyone can go. It’s just one of them things. I have to swallow it and move on from it.”

‘Scene commented on how much mentally tougher Buglioni appeared to be having interviewed him in the past.

“Well boxing is a tough hard sport and it’ll either make you or break you, and it’s made me,” he responded.

“I’m not going to sit here and say I haven’t had dark times or bad thoughts or wanted to quit. But you don’t, you get through it. As I say with life there’s always going to be ups and downs, I’ve been very thankful. I’ve had plenty of ups in boxing and I’m sure there’s more to come. It’s my life, I love it and I certainly feel there’s a lot more left in the tank.”

Fighting day in day out through the repetition of sparring or the same training drills outside the ring has built Buglioni into a specimen who knows how to take things on the chin in more ways than one. His education through the years under trainers like Mark Tibbs, Paschal and Steve Collins have shaped and round him into who he is today.

“Don Charles brings another aspect to the game,” he added. “Very calm, but also very strong. I’ve learned off every single trainer I’ve had and all the people around me, and I feel very strong and I’m in a good place.”

Buglioni says he will be cuter and cleaner in his performances moving forward. He’s no stranger to a tear-up and due to the power, he possesses the temptation to go in for the finish always remains. Chipping away and dismantling his opponents is what he will be looking to do in the future.

“I’m going to be a bit more calculated,” he vowed.

Saturday’s scheduled eight rounder against Spanish-based Cameroonian Emmanuel Feuzeu (10-7-2, 4 KOs) is nothing more than a way of dusting off the cobwebs and ensuring that no scars remain after the loss to Johnson. From there Buglioni is eyeing big fights, particularly domestic ones if they present themselves. And the former male model, who initially wanted to be an architect, has lent his full support to Callum Johnson’s world title bid against Beterbiev later in October

“People look at the fight and say Beterbiev’s this, that and the other but you know what? Callum Johnson can whack.” Said Buglioni.

“He can punch. He’s got a puncher’s chance. He’s on a good run at the moment. Good luck to him. Everyone can be hurt, everyone can be beat so there’s no reason why he can’t go in there and do it. He’s certainly up against it and Beterbiev is possibly one of the hardest in the light heavyweight division. It’s going to be tough and there’s no reason why he can’t do it. He’s got the balls to take it so good luck to him.”

[QUOTE=ceylon mooney;18968105]still cant tell how good betrrbiev is. a coupla yesrs back he was the dark horse bookeyman. eh, that fizzled like his career momentum i guess. he hasnt looked like the scary destroyer we (hardcore fan culture) hyped him…

Trying to prop up the guy who knocked him out. Nobody wants to be knocked out by a nobody I guess. Johnson has no shot here.

Frank speaks well. He could easily go down the deluded motormouth route but he's clear headed and grounded. Ok, he's not a future HoF'er but at least I'm not shaking my head at his reflections.

still cant tell how good betrrbiev is. a coupla yesrs back he was the dark horse bookeyman. eh, that fizzled like his career momentum i guess. he hasnt looked like the scary destroyer we (hardcore fan culture) hyped him up…