NEW YORK – For two-plus rounds, Donnie Haynesworth had more success against Bryant Jennings than most anticipated.

Once Jennings connected with a right hand late in the third round, though, their scheduled eight-round heavyweight fight completely changed. Referee Arthur Mercante Jr. strangely gave Haynesworth, who was still standing, time to show that he could continue.

Once a disoriented Haynesworth failed to do that, Mercante stopped the fight at 2:29 of the third round. 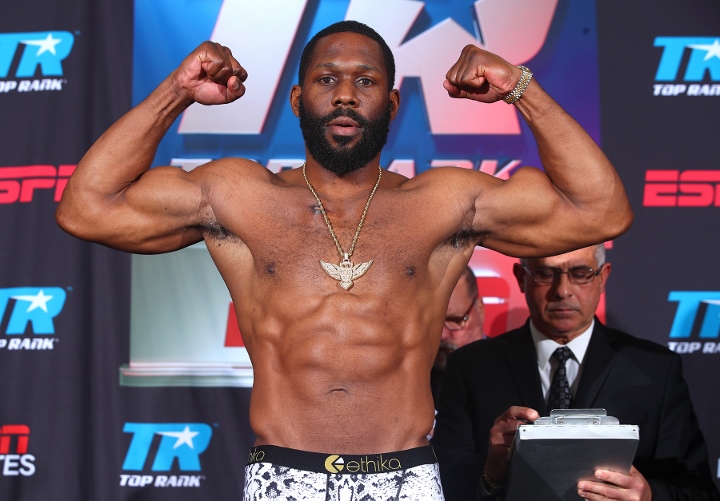 Philadelphia’s Jennings improved to 21-2 by recording his 12th knockout on the Vasyl Lomachenko-Guillermo Rigondeaux undercard in The Theater at Madison Square Garden. Haynesworth, of Greensboro, North Carolina, slipped to 13-2-1 (11 KOs).

Before Saturday night, the 6-feet-3, 271-pound Haynesworth hadn’t lost since suffering a four-round, split-decision defeat to Robert Dunton (then 10-13-1) in his third pro fight, nearly three years ago in Charlotte, North Carolina.

"There is a reason why this sport is called the Sweet Science.  People may think it is easy to go into the ring on fight night but it is not. I've been working at our gym in Philadelphia  getting into the right comfort zone while in the ring fighting.  That means being at ease when you go to work and attack your opponent in special unique ways to make him unsettled and uncomfortable.  There is a lot of thought process going on when you are inside the ropes.  This is my fourth time at Madison Square Garden," said Jennings.

Nothing more the to get the cobwebs of his mind , body and Technic!!!! That's all so sooner the better for this guy before he got seriously hurt . These guys are HW one punch could severely damage or be…

That stoppage was weird. It's like once the ref realized he had halted the action but there was no actual knockdown, he had no choice but to call the fight.

Good win. A step in the right direction.