Kell Brook mocked Amir Khan on Tuesday after Khan revealed the rehydration clause he wants in any contract for their much-discussed domestic showdown.

Khan told Sky Sports on Tuesday that Brook has agreed to a stipulation that he cannot gain more than 10 pounds presumably prior to a second day weigh-in for a 147-pound bout early in 2019. Brook (37-2, 26 KOs), a former IBF welterweight champ, moved up to the junior middleweight limit of 154 pounds for his last fight – a second-round knockout of Sergey Rabchenka (29-4, 22 KOs) on March 3 in Sheffield, England.

The Sheffield native has long wanted to fight Khan, who has repeatedly stated that he’ll only box Brook at the welterweight limit of 147. Brook apparently is willing to do that and adhere to the rehydration clause, but he clearly isn’t pleased about it. 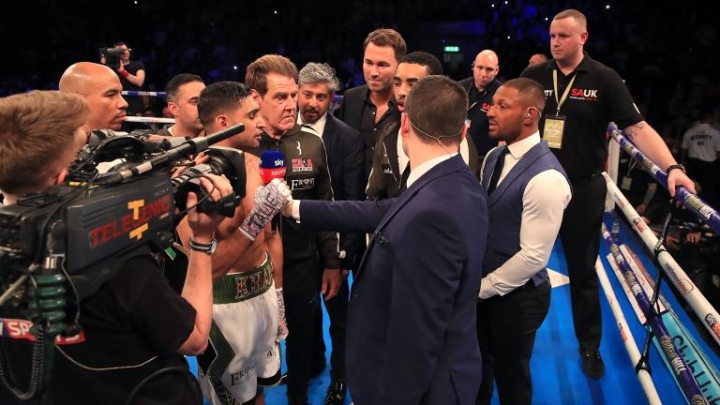 “Please Mr. Brook don’t rehydrate and hurt me,” Brook stated in a Tweet on Tuesday. “This DIVA still thinks he’s a celebrity and in the Jungle rationing what I can eat?”

Brook’s “jungle” comment referenced Khan’s appearance last year on “I’m A Celebrity … Get Me Out Of Here!,” a reality show that aired in the United Kingdom.

Khan’s rival then added to his Tweet, “@amirkhan I’ll weigh in at 147, and then eat whatever I like #Khanivore #TooShookForBrook.”

Brook’s second statement seems to indicate that he isn’t willing to agree to a rehydration clause, though didn’t outright state that.

Bolton’s Khan (33-4, 20 KOs) has won two fights since ending nearly a two-year layoff April 21 in Liverpool, England. In his last fight, however, Colombia’s Samuel Vargas (29-4-2, 14 KOs) dropped Khan late in the second round and gave the former 140-pound champion a tougher fight than anticipated on his way to losing a 12-round unanimous decision September 8 in Manchester.

Khan has one fight remaining on his three-bout contract with Matchroom Boxing, which also promotes Brook. Matchroom’s Eddie Hearn wants nothing more than to make a Khan-Brook bout next.

“Obviously, me and Brook are with Eddie Hearn,” Khan told Sky Sports on Tuesday. “I’ve left that to Eddie to do all the negotiations, to speak to both parties, to speak to his trainer, his manager, himself. But look, it’s a fight that I would love to have, and I think it would make a lot of money financially for both fighters. But at the same time, it would be a massive fight in the UK. It’s a fight that the fans want. Why not make it happen?

“Nothing can stop it. He’s agreed to be 147, and also have a rehydration clause of 10 pounds. I’m happy with that. If he’s happy to take that, so am I. That fight can happen, then 147 it is, and we’re with the same promotional team, so that makes the fight even easier [to make]. Let’s see what happens.”

Brook walks around at 180, so I don't blame Khan for wanting a rehydration clause. This is something that should be mandatory for all fights. No rehydrating past one full weight class.

Just another obstacle put up by khanvas Brook will leather the dafty and he knows it .....

[QUOTE=JWHardin;19181650]True! I know Khan isn't the brightest candle on the cake, but he has to realize sooner or later he is a laughing stock. Personally I don't really care if they fight or not. 3 or 4 years ago maybe,…