Shannon Briggs has taken his “Let’s Go Champ” chant to another level.

The former WBO heavyweight champion claimed in an interview with Sky Sports that Logan Paul could contend for “a real title shot” within three to five years. According to Briggs, who has trained Paul for his rematch against KSI on Saturday night, Paul plans to continue his boxing career after defeating his rival in their main event at Staples Center in Los Angeles.

“He has amazing reflexes,” Briggs told Sky Sports for a story posted to its website Tuesday. “He’s athletic in every way. He has a great jab. I think we’re looking at the future of boxing – I mean that. I believe he has everything it takes. I believe in time, three to five years, we can be in contention for a real title shot.” 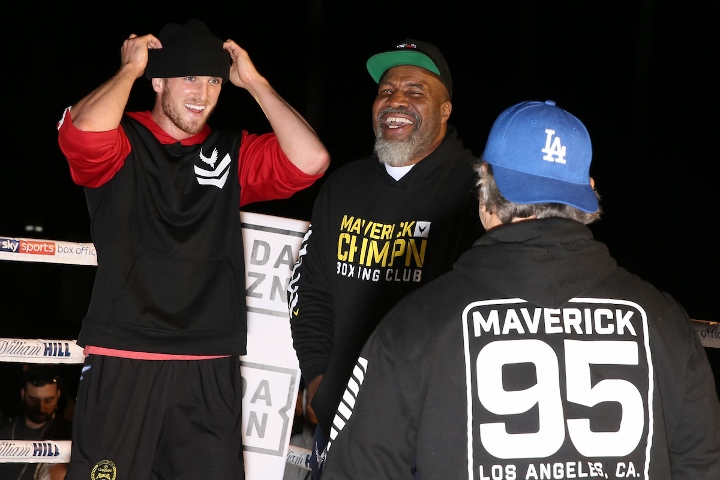 The six-round rematch between YouTube rivals Paul and KSI, whose real name is Olajide Olatunji, will be contested at the cruiserweight limit of 200 pounds.

“This is not the end; it’s only the beginning,” Briggs said in reference to Paul’s professional boxing career. “He’ll be right back fighting very soon. We look to hopefully get 10 to 12 fights next year, and 12 fights the following year.”

That’s an ambitious game plan for an inexperienced boxer who has just a six-round amateur match on his resume.

That bout between KSI and Paul resulted in a majority draw in August 2018 at Manchester Arena in Manchester, England. It also resulted in a commercial success because it generated 1,005,000 pay-per-view buys on YouTube and accounted for $11 million in overall revenue.

Their rematch has attracted even more attention for KSI and Paul, who combined have more than 40 million YouTube subscribers, nearly 23 million Instagram followers and over 10 million Twitter followers.

“I said it two months ago,” Paul told Sky Sports. “This is not the kid that was making YouTube videos at the beginning of the year. That’s not this kid. I’m a boxer and I feel like that, and I feel like an animal. I’ll come on this red carpet and smile, but there’s a demon inside of me that I’m trying to suppress right now.”

The insane thing is, with the amount of ppl who will pay to watch these dudes fight, they are not going anywhere, and if they build up a 15-0, 20-0 record against low level opp, they WILL get title shots…

Maybe he can fight Mickey Rourke

[QUOTE=davef;20179166]lol 10 to 12 fights in a year? there is going to be a lot of cab drivers resting up in hospital during that period then[/QUOTE] Easy money.