More than 15 months after punching their way through the semifinal round of the World Boxing Super Series, Mairis Briedis and Yuniel Dorticos are finally set to collide.

The pair of top-rated cruiserweights meet in the last of three WBSS tournament finals, their bout taking place Saturday evening in front of a crowdless Plazamedia Broadcasting Center in Munich, Germany.

At stake in the highly anticipated and thrice scheduled meeting is the lineal cruiserweight championship, Dorticos’ IBF title and the tournament’s coveted Ali Trophy, named after the late, legendary Muhammad Ali. 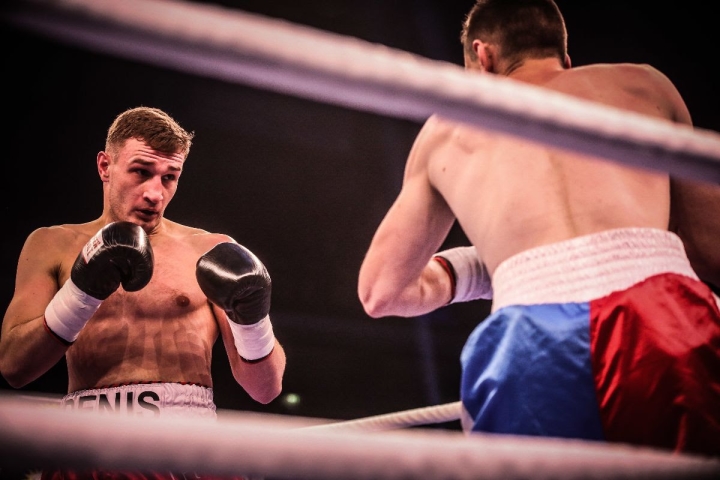 Denis Radovan woke up Saturday morning expecting to face Robert Talarek in Saturday’s chief support. He instead had to settle for very late replacement Nuhu Lawal, whom the unbeaten middleweight easily outpointed over 10 rounds.

All three judges scored the contest 100-90 in favor of Radovan, who celebrates his 28th birthday in two weeks.

For now, he celebrates his first win in 11 months, though against an unexpected foe. Talarek was forced to withdraw from the show after coming into contact with someone who tested positive for COVID-19, despite himself testing negative. In came Nigeria’s Lawal (27-8, 15KOs), who weighed 166 pounds and thus was unable to win the regional middleweight title at stake.

That was never going to happen, regardless. Radovan (14-0-1, 6KOs) dominated the fight, though remaining in one gear throughout. Lawal was rocked by right hands in rounds three and four, but otherwise was forced to swarm through steady stream of jabs from Cologne’s Radovan.

Judges Holger Wiemann, Alexander Plumass and Bayasagalan Sandag all scored the contest 80-72 in favor of Bunn, who delivered a steady body attack throughout the bout.

The one-sided affair saw Bunn (16-0, 8KOs) work his way inside with his jab, setting up digging left hooks to the body while Laine spent most of the early rounds with his back against the ropes. Bunn nearly scored a knockdown in round three, connecting with a body shot which forced Laine to dip his knee though managing to remain upright.

Laine (27-14, 11KOs) attempted to surge late in the contest, taking advantage of a briefly slowed down Bunn to let his hands go late in round six. It wasn’t enough to win the frame, though a reminder that Bunn needs to work three minutes of every round particularly as moves up the ranks.

Teenage prodigy Sophie Alisch was forced to overcome her stiffest challenge to date in order to remain perfect. The 18-year old former amateur standout from Berlin worked hard to grind out an eight-round unanimous decision over veteran trialhorse Edina Kiss.

Judges Holger Wiemann (77-75), Alexander Plumass (77-75) and Bayasagalan Sandag (78-74) all scored the contest in favor of Alisch, all three scores accurately reflecting the work put in by Kiss to make it a competitive fight.

Alisch sought to box early but was never let off the hook, as Kiss never stopped coming forward. The 30-year old from Budapest challenged the house fighter every step of the way, scoring with a heavy right hand in round three which tested Alisch’s chin.

The second half of the bout was sloppy as fatigue was setting in for both boxers. The 18-year old Alisch tried to jab her way inside, while Kiss continued to throw heavy leather. The cleaner boxing offered by Alisch was enough to sway the three judges, though barely edging it on two of the three cards to advance to 6-0 (1KOs). Kiss suffers her fourth straight defeat, falling to 15-14 (9KOs).

Edina Kiss was robbed. She pounded that Sophie girl.