Breazeale: When I Beat Wilder, Joshua Will Give Me A Rematch

If Dominic Breazeale beats Deontay Wilder on Saturday night, it’ll be by far the biggest win of the 33-year-old contender’s career.

In addition to winning the WBC heavyweight title, Breazeale believes upsetting Wilder would lead him to a chance to avenge the most devastating defeat he has suffered since he picked up boxing at the late age of 22. Otherwise, Breazeale realizes he’ll never get an opportunity to avenge his technical-knockout defeat to Anthony Joshua.

“It’s not if, it’s when I beat Wilder,” Breazeale told Sky Sports for a story posted to its website Wednesday night. “When I beat Wilder, I definitely will love to unify the titles against AJ.” 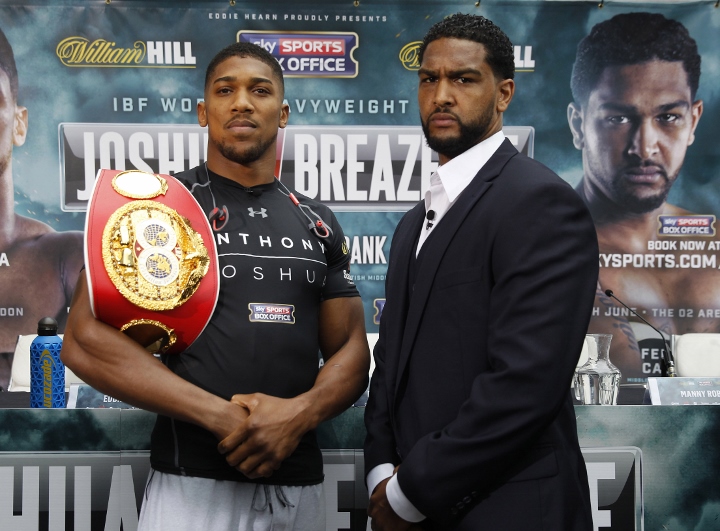 Joshua dominated Breazeale, who was way behind on the scorecards when the big British superstar dropped him twice in the seventh round of their June 2016 fight at O2 Arena in London. Their scheduled 12-rounder was stopped in that very same seventh round.

That subpar performance against Joshua is among the reasons Wilder (40-0-1, 39 KOs) is an 8-1 favorite to beat Breazeale (20-1, 18 KOs) in their “Showtime Championship Boxing” main event at Barclays Center in Brooklyn.

“AJ has no reason to come down to me and fight me. If I’ve got a belt that he wants, he’s definitely gonna fight me for it. So, a unification and undisputed championship belt is definitely on the horizon.”

The Wilder-Breazeale bout will headline a Showtime tripleheader set to start at 9 p.m. ET/6 p.m. PT.

[QUOTE=KP1;19749358]Wilder has had several offers of increasing value over a period of time, it’s basically the definition of negotiation. And as someone pointed out team Wilder cancelled and refused meetings.[/QUOTE] Are these offers you speak of The 10 mil take…

[QUOTE=R_Walken;19749203]Offers without the willingness to negotiate aren’t serious offers They were willing to have professional negotiations with Parker because he wasn’t a threat , Every fighter that is deemed a threat gets a offer but it’s take it or leave…

[QUOTE=R_Walken;19749220]First off AJ isn’t ducking and never said he was, Bes a Champion and has a Champion Fighters Mentality he isn’t afraid of No one AJ admits he isn’t involved in negotiations so even if he wants the fight it…

[QUOTE=R_Walken;19749203]Offers without the willingness to negotiate aren’t serious offers They were willing to have professional negotiations with Parker because he wasn’t a threat , Every fighter that is deemed a threat gets a offer but it’s take it or leave…

[QUOTE=REDEEMER;19747808]Good already having that meltdown now that you see what's coming. Better get them excuses ready when Wilder loses then go on a rant with more dimwitted posts about AJ ducking Wilder. Ha[/QUOTE] First off AJ isn’t ducking and never…