If Dominic Breazeale knocks out Carlos Negron on December 22 at Barclays Center in Brooklyn, New York, the 2012 Olympian may bring himself closer to his dream of challenging heavyweight champion Deontay Wilder.

“Trouble” Breazeale (19-1, 17 KOs) fights the 6-foot-6 Negron (20-1, 16 KOs) of Puerto Rico three weeks after an appearance by Wilder (40-0, 39 KOs), who pursues his eighth straight knockout in as many WBC title defenses against lineal champion Tyson Fury (27-0, 19 KOs) of England on Showtime Pay-Per-View on December 1 at Staples Center in Los Angeles.

“I’m not necessarily rooting for either guy, and as heavyweights, a knockout can happen with any punch. But I think Fury’s got the better edge, being the bigger, awkward, boxing stylistic kind of guy. Wilder’s got himself into a situation where you can’t find sparring partners who stand 6-foot-9 and weigh 260 pounds.” said Breazeale, of Southern California, the WBC’s mandatory challenger to the Wilder-Fury winner.

“Nor can you find someone who has that 85-inch reach. That’s something you can’t really reproduce and plan for in a training camp. Wilder’s got the knockout power, and Fury’s a big guy who knows how to survive those championship rounds and look good doing it. so he can knock you out as well. Sooner or later, though, I really want my shot at Deontay Wilder.” 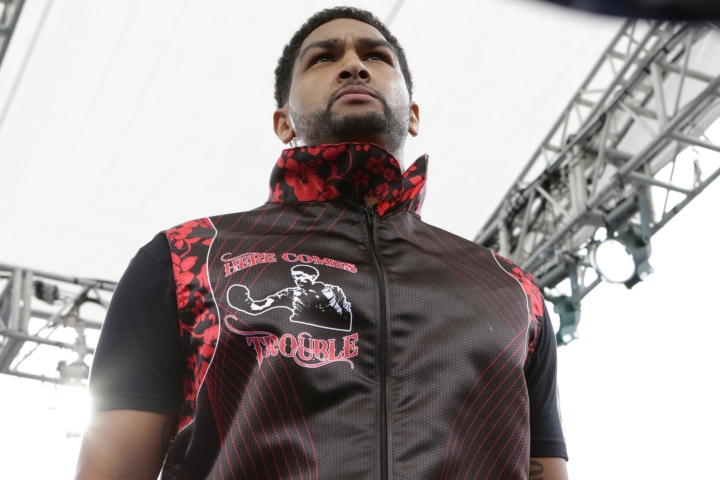 A pair of 33-year-old, 6-foot-7 boxers, the Wilder-Brezeale rivalry has intensified since appearing on the same cards back-to-back in February and November.

Breazeale stopped previously unbeaten Izuagbe Ugonoh in the fifth round on the undercard of Wilder  doing the same to Gerald Washington at Legacy Arena in Birmingham, Alabama, an hour from “The Bronze Bomber’s” hometown of Tuscaloosa.

Breazeale subsequently scored an eighth-round knockout of Eric Molina in his last fight, doing so on the undercard Wilder’s three-knockdown, first-round KO of Bermane Stiverne at Barclays Center in Brooklyn, New York, in November.

“This will be my first time back at the Barclays Center in the 13 months since I beat Eric Molina on the undercard of the Deontay Wilder knockout of Bermane Stiverne,” said Breazeale to BoxingScene.com.

"I want to be able to show that’s I’ve been active, in the gym, don’t have any ring rust, and that I can still box, put on the pressure and put the peddle to the metal to let the fans know that I’m here to stay.”

Wilder’s victory over Ortiz represented his seventh defense of the crown he won by dethroning Stiverne by unanimous decision in January 2015, and Breazeale’s pair of consecutive wins were a rebound from a seventh-round TKO loss to unified champion Anthony Joshua in June 2016.

"I can’t wait to put my hands on Breazeale," said Wilder, who is coming off a three-knockdown, 10th-round knockout of previously unbeaten Cuban southpaw Luis Ortiz in March. “I would punish Breazeale worse than I did Stiverne."

But Breazeale must first get beyond Negron, a 31-year-old who is after his eighth straight knockout since being stopped in the third round by Epifano Mendoza in September 2011. Breazeale dropped and stopped Mendoza in the first round in December 2014.

"Carlos Negron is a big guy and a fellow Olympian. We have one common opponent in Epifanio Mendoza, who knocked him out in the third round and I knocked out in the first round,” said Breazeale.

“A knockout is always great to come out victorious with, and I wanna get that knockout and finish the fight when the opportunity arises. I wish I was fighting for the heavyweight title, but as of now, I'll take this step, looking forward to winning on December 22, and then, to fighting the winner of the Wilder-Fury fight.”

Breazeale is not getting any mando until late 2020 and someone here told me whyte should go fight for second mando under wbc. He will probably get his shot by 2023.

Its long overdue. Breazeale should have fought some stay busy fights in his mando position.

Yeah fury went the distance and beat the big bad 39 yo Klitschko. The same Klitschko who got knocked out 3 times years before by journey men who wouldn’t stand a chance against an old George Forman years before fury…

Breazeale is one of the worst contenders I've seen I saw this guy fight numerous times he's only a contender in a weak division with 3-4 legit fighters Wilder Joshua fury Ortiz , Whyte Pulev are Fringe contenders after that…