EDINBURG, TEXAS - Later on tonight Brandon Figueroa (19-0) will defend his interim WBA super bantamweight title against Javier Nicolas (29-4-1) of Argentina with thousands of his hometown fans in attendance.

Omar Juarez (5-0) scored a vicious first round highlight reel knockout of Gino De La Paz (2-3-1) in their super lightweight showdown. De La Paz riled the crowd with a punch on the break early on against Juarez who is from nearby Brownsville.

The punch infuriated Juarez who decided to throw caution to the wind and stand and trade with De La Paz.  Both fighters landed solid punches but it was clear that Juarez was the harder puncher.

A big right hand sent De La Paz to the canvas almost face first.  He surprisingly was able to get to a knee but couldn't beat the count to 10.

Kicking off the FS1 telecast, Jaime Arboleda (15-1) of Panama made quick work of Victor Betancourt (26-3) in their super featherweight clash. Arboleda rocked Betancourt early on with a right hand to the head that staggered the Mexican.  Seconds later he would drop him with a short right hand to the body.  Betancourt would rise to his feet but was still on shaky legs.  Another right to the body dropped Betancourt to his knee which prompted the referee to quickly call a halt to the bout.  The time of the stoppage was 2:32.

Cesar Cantu (3-0) of nearby Weslaco, Texas, thrilled his local fans with a unanimous decision victory over Eddie Hines (1-2) in their super featherweight clash.  Cantu walked through a few punches but dominated most of the fight.

Hines looked overwhelmed from the beginning as Cantu attacked both his body and his head. Hines was gassed the last round with his mouth wide open for most of the stanza but made it to the last bell. The final tallies read 40-36 on all three cards.

Super lightweight prospect Darwin Price (15-0) made the most of this exposure on FS2 with a 2nd round knockout of Aaron Herrera (35-11-1) in their bout that was scheduled for 10 rounds.

A clash of heads occurred in the opening stanza which prompted the doctor to check out Herrera.  He was cleared to fight but the end was near.  In the 2nd round Price clipped Herrera with a big right hand to the head. After starting his count the referee waived off the fight at the 2:58 mark.

Bantamweight prospect Damien "Sugar" Vazquez (14-1-1) looked to bounced back from his March loss to Juan Carlos Payano but had to settle for a majority draw against Josue Morales (9-10-4).

The 22-year-old continuously beat Morales to the punch over the first three rounds.  Morales found some success in the middle rounds, winning the 4th and 5th but Vazquez turned it up and appeared to do enough in the 6th round to win the fight.

However, two of the judges had it differently and the final scores were 58-56 for Vazquez and 57-57 twice.

Raymond Guajardo (3-0) overpowered McArio Del Castillo (0-2) in ther super welterweight tilt.  The fight was scheduled for 4 rounds but it was evident from the opening bell that San Antonio's Guajardo was way too much for Del Castillo.  Guajardo's power had Del Castillo turning his back a few times which resulted in Guajardo landing rabbit punches.  After turning his back again the referee waived off the fight at the 2:29 mark of the first round.

Sean "Sugar Rush" Garcia improved to 5-0 after dominating Nestor Robledo (7-10-2) over 4 rounds in their featherweight bout.  The younger brother of top lightweight prospect Ryan Garcia is now 2-0 in 2019. The final scores were 40-36 on all three scorecards in favor of the 18-year-old.

McAllen native Nelson Hampton (7-2) won a dominant decision over Jesus Arevalo (2-8).  Hampton started off strong and nearly stopped Arevalo in the first round.  However, Arevalo was game and stayed on his feet all 4 rounds.  The final tallies were 40-36 on all three scorecards.

Raphael Murphy (13-1) picked up his second victory of the year with a unanimous decision victory over Larry Pryor (11-20). Murphy survived some rough moments in the opening round but dominated most of the action over the last three rounds.  The final scores were 39-36, 38-36, and 40-36.

Angel Alejandro improved to 7-0 with a victory over Eric Manriquez (7-8-1) in their featherweight fight.

Local favorite Dimas DeLeon is now 9-0 after his victory over Roberto Pucheta (10-18-1).in their super featherweight fight. 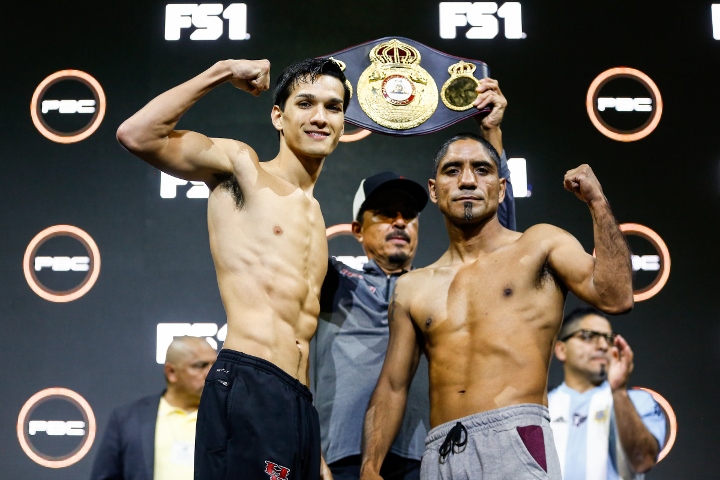