CARSON, Calif. — Brandon Figueroa wants to be known for his boxing accolades, not just for his relatives. He might never escape the shadow of his older brother, Omar Jr., but at least it won’t be the only reference when Brandon Figueroa’s boxing resume comes up.

Figueroa became a world champion after defeating Yonfrez Parejo by knockout to capture the WBA interim junior featherweight belt on Saturday during the Danny Garcia-Adrian Granados undercard at Dignity Health Sports Park. Parejo’s corner stopped the bout before the ninth round.

Figueroa stuck to his patient game plan by constantly attacking Parejo’s body. After four back-and-forth rounds, Figueroa saw the results in the fifth when he had the veteran Venezuelan retreating. Figueroa didn’t let Parejo escape and punished him by the ropes. 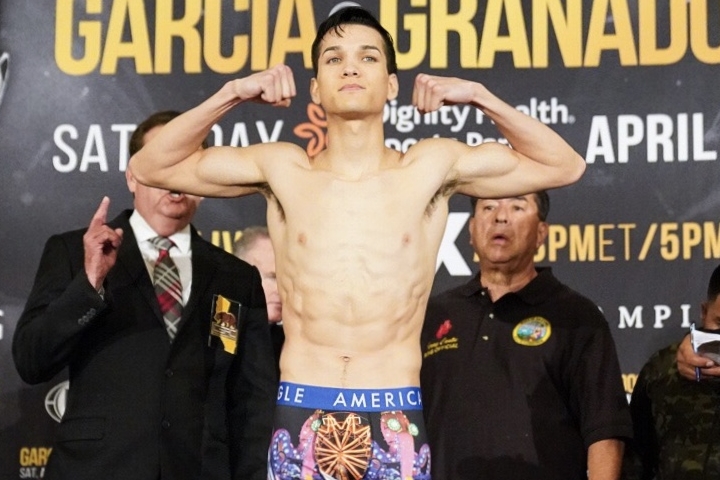 It was more of the same the following rounds, with Parejo throwing less punches in each round. He had enough punishment after the eighth round.

Figueroa, the 22-year-old fighter known as the “Heartbreaker,” continued his dominant streak of knockouts. He has 14 knockouts in his 19 professional fights, including the last six bouts.

Figueroa, who’s trained by his father Omar Sr., made his presence felt on the inside with body shots, something he said he was going to do entering the fight.

"The pressure, the inside game, the body shots and my relentlessness will be too much him,” Figueroa said earlier this week. “I don't think he can handle it for 12 rounds.”

With the interim belt around his waist, Figueroa could be in line to face the winner of next week’s unification bout between WBA champion Daniel Roman and IBF titlist TJ Doheny.

"This was definitely one of my stronger training camps,” Figueroa said. “We did a lot of work on my legs and strengthening them. It puts a little more pop in my punches. The conditioning was important too because I know this guy isn't going to go down easy."

PBC has Rigondeaux right? They should have him fight this guy, would be a great fight.

This guy is too strong in this weight His inside game is amazing, guy can bang. Now he is the #1 in the wba rankings

Beating a blown up fringe bantamweight contender hardly makes him a Jr. Featherweight "champion". Typical alphabet nonsense. I hate having my intelligence insulted by these organizations. But Figueroa is one to watch when he steps up in class.

These Figueroa brothers are seriously underrated.