Braekhus On Shields: Nobody Is In Position To Be GWOAT; Has To Prove Herself More

Cecilia Braekhus doesn’t feel she has even established herself as the “Greatest Woman of All Time” in boxing.

The 38-year-old Braekhus still thinks she must prove more to warrant consideration for such effusive praise. 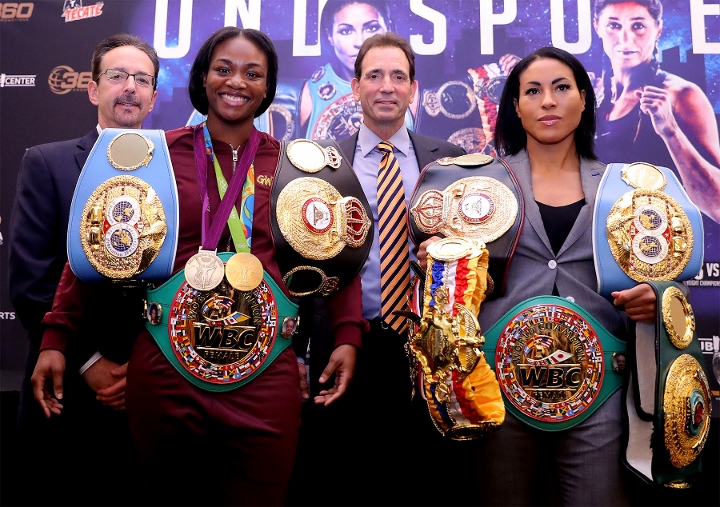 Regardless, Braekhus definitely doesn’t think Claressa Shields has done enough to have earned that distinction. The 25-year-old Shields, a two-time Olympic gold medalist, already has won world titles in three weight classes and has dubbed herself the “GWOAT.”

“There are so many great female fighters right now,” Braekhus said during a virtual press conference Tuesday. “And, you know, I like when Claressa Shields says that. You know, she huffs and puffs, and she makes good commercials for herself, and she also draws attention to women’s boxing. That’s it. You know, nobody is really in a position to call themselves the GWOAT.

“So, we just have to see what’s happening now, because the pool of talent, it’s so big. I mean, just the last few weeks we’ve seen Mikaela Mayer, Natasha Jonas, Terri Harper. You have Katie Taylor. … It’s more to come. The pool is so deep now. That’s the best thing, and I think we should be more focused on that than crowning the GWOAT right now.”

Ireland’s Taylor (15-0, 6 KOs) then would need to beat Belgium’s Delfine Persoon (44-2, 18 KOs) in their 10-round rematch August 22 in Brentwood, England, to advance to what would be a highly anticipated Braekhus bout. Taylor, who topped Persoon by majority decision 14 months ago at Madison Square Garden, and Persoon will fight for Taylor’s IBF, WBA, WBC and WBO lightweight titles.

Whereas a showdown with Taylor seems much more makeable at a catch weight between welterweight and lightweight, Braekhus hasn’t entirely ruled out moving up to face Shields at a catch weight.

Shields (10-0, 2 KOs), of Flint, Michigan, is expected to meet Montreal’s Marie-Eve Dicaire (17-0, 0 KOs) in her next fight. Assuming their bout is rescheduled, Shields and Dicaire would fight for Shields’ WBC and WBO 154-pound titles, Dicaire’s IBF junior middleweight crown and the vacant WBA “super” 154-pound championship.

Even if Shields dominates Dicaire, Braekhus believes she’d still have more to accomplish before she could correctly call herself the “GWOAT.”

“I mean, that’s a big title,” Braekhus said. “I think we have to wait a little bit before we can declare anyone [worthy] of that title. We need some more big fights. And like I said, the talent pool is so big. So, you know, Claressa calling herself the GWOAT, it’s great for the attention and for women’s boxing. But she has to prove herself a little bit more first.”

[QUOTE=Squ□redCircle34;20703444]You keep making excuses for her not challenging herself finally and conquering other divisions and making bigger fighter drain themselves or fighting smaller fighter so she can have all the advantages as if she sells out stadiums in Norway! Lol…

[QUOTE=famicommander;20703426]If Shields wants the fight she should move down to 147. It's ridiculous to expect someone riding a 25 fight title defense streak to break that to move up to a division nobody cares about to fight someone 15 years…

[QUOTE=Squ□redCircle34;20703363]You can break it down, chop it up and grind it out however you like but you can’t dismiss the truth that Braekhus wanted no parts of Shields and will never fight her![/QUOTE] If Shields wants the fight she should…

[QUOTE=famicommander;20701930]1. Braekhus has never had a close fight. She has won every 10 rounder by either stoppage or a margin of 7 rounds to 3 or greater 2. The one person who fought both (Habazin) flat out said Braekhus is…