The longest-reigning champion in all of boxing can make more history Saturday night.

If Cecilia Braekhus beats Jessica McCaskill, she’ll have made the 26th consecutive defenses of the WBA and WBC welterweight titles she won in March 2009. By doing so, she’d surpass Joe Louis’ 72-year-old record of 25 straight championship defenses in the same weight class.

The historical significance of such an accomplishment and people merely mentioning her in the same sentence as the legendary Louis obviously isn’t lost on the 38-year-old Braekhus.

“Of course, it would be a big deal,” Braekhus said during a virtual press conference Tuesday. “I [didn’t] think anyone would break that record in a long time, so it would definitely be a moment for me that would be staying in history for a quite a while. And what I enjoy about it is that people are now starting to recognize my career, you know, starting to go back and, you know, it’s not easy to be a world champion. And getting to be a world champion is a lot of work, but staying at the top is also a lot of work. So, I’m very glad, you know, getting that kind of recognition. And for the new fans, it’s very special to me.” 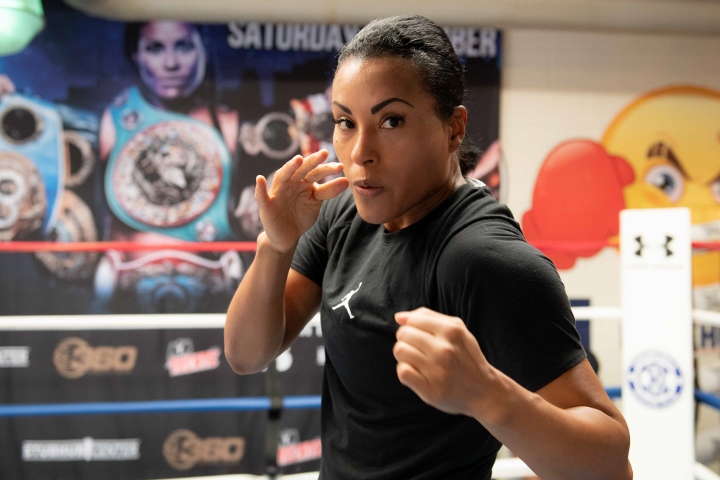 Norway’s Braekhus (36-0, 9 KOs) is consistently listed as a 6-1 favorite to beat the comparatively inexperienced McCaskill (8-2, 3 KOs) in their 10-round fight for her IBF, IBO, WBA, WBC and WBO 147-pound championships. DAZN will stream the Braekhus-McCaskill match as the main event of a six-bout card from a makeshift, outdoor venue in downtown Tulsa, Oklahoma (8 p.m. ET/5 p.m. PT).

Breaking Louis’ record remained on Braekhus’ mind during training camp in Big Bear Lake, California, but she was more focused on Chicago’s McCaskill.

“I try not to think too much of it,” Braekhus told BoxingScene.com. “I try to just take it with me in training, as a motivation. And, of course, you know, it would be mean everything. But that’s not the way I’m thinking right now. I’m just using that as motivation to just be able to do my best.”

The late Louis, one of the most revered figures in sports history, made 25 consecutive defenses of the undisputed heavyweight title from 1937-48.

Louis won the title by knocking out “The Cinderella Man,” Jim Braddock, in the eighth round of their June 1937 fight at Comiskey Park in Chicago. “The Brown Bomber” didn’t lose again until Ezzard Charles beat Louis by unanimous decision in their 15-round fight in September 1950 at Yankee Stadium in the Bronx.

Detroit’s Louis retired as heavyweight champion in March 1949, eight months after he knocked out “Jersey” Joe Walcott in the 11th round of their rematch at Yankee Stadium. Louis fought 10 more times after coming back, but he retired permanently after Rocky Marciano knocked him out in the eighth round of their October 1951 fight at Madison Square Garden in New York.

Braekhus got this! 1st lady of boxing and GWOAT ❤️

She won't be breaking his record but of course has set the record in womens boxing already and will extend it if she gets past McCaskill tomorrow. She just got a bit carried away that's all.

Rest easy Joe, your record still stands. No matter how many defenses she makes.