Cecilia Braekhus has prepared to encounter a much-improved Jessica McCaskill on Saturday night.

The long-reigning women’s welterweight champion was impressed by McCaskill’s two performances against Erica Farias since Katie Taylor beat McCaskill by unanimous decision in their 10-round, 135-pound title fight in December 2017. Chicago’s McCaskill defeated Farias by 10-round unanimous decision in her first fight after losing to Taylor and edged Argentina’s Farias again, this time by majority decision, in their 10-round rematch last October 12 for the WBA and WBC 140-pound championships.

The comparatively inexperienced McCaskill (8-2, 3 KOs) will challenge Norway’s Braekhus (36-0, 9 KOs) for her IBF, IBO, WBA, WBC and WBO 147-pound crowns in the main event of a card DAZN will stream from an outdoor venue in downtown Tulsa, Oklahoma.

“I think she’s very impressive,” Braekhus told BoxingScene.com. “The way she’s been developed the last year has just been fun. It’s been very impressive to watch. You know, she just came out of nowhere and gave Katie Taylor a heck of a fight. And then she just beat a seasoned champion like [Erica] Farias, which was really impressive. And she’s really hungry. She’s in a flow now. … We don’t take her lightly in any way. We are working very, very hard because this is gonna be a tough fight.” 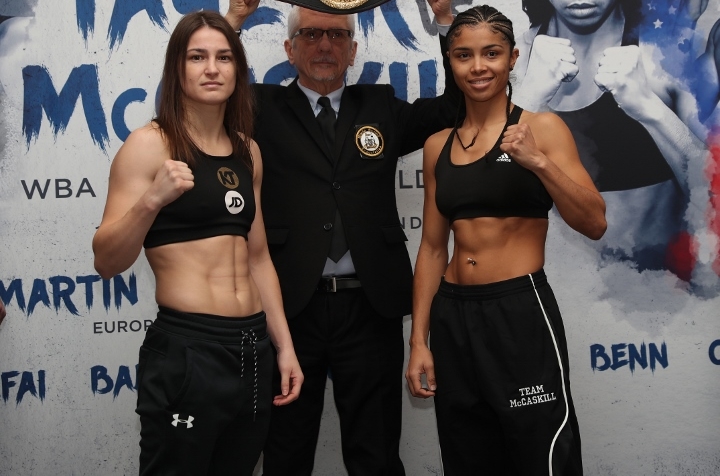 The 35-year-old McCaskill, who turned pro in August 2015, will try to prevent Braekhus from securing a spot in her own showdown with Ireland’s Taylor (15-0, 6 KOs). If Braekhus wins Saturday night and Taylor beats Belgium’s Delfine Persoon (44-2, 18 KOs) in their rematch August 22, the unbeaten champions are expected to meet next in what would be a huge fight for women’s boxing.

The Colombian-born Braekhus has held the WBA and WBC welterweight titles since March 2009.

“She sees the kind of attention I get, being an undisputed champion,” Braekhus said of McCaskill. “She sees everything I have, and she wants that. She won’t get it, unfortunately [for her], but she will try her hardest.”

McCaskill has won three bouts in a row since Taylor topped her 2½ years ago. Taylor, a 2012 Olympic gold medalist, won that bout comfortably on all three scorecards to retain her WBA lightweight title.

“This was a fight Katie Taylor won, of course,” Braekhus said. “But that was a very new and unpolished McCaskill in this fight. Katie Taylor is an Olympic champion – you have to remember that. Then she was up against Farias, and we saw this fighter who was just developed and starting to listen to her strategy and being physically capable to be a little bit more of a boxer, not just be able to brawl. Katie Taylor did not have an easy night, but this is completely different.

“[McCaskill is] a completely different athlete and boxer. She’s more seasoned and she’s more aware of what she’s doing in the ring, and she has a plan behind it. It’s been fun to see that development. It’s a huge difference. It had to be a huge difference, because the Katie Taylor version of her would never have beaten Farias.”