Bradley Expects To Get No Credit If He Beats Manny Pacquiao

Timothy Bradley realizes Manny Pacquiao is 37 and hasn’t scored a knockout in more than six years.

Bradley (33-1-1, 13 KOs, 1 NC) still doesn’t expect a lesser version of Pacquiao to show up April 9 at MGM Grand in Las Vegas than the first two times they fought. 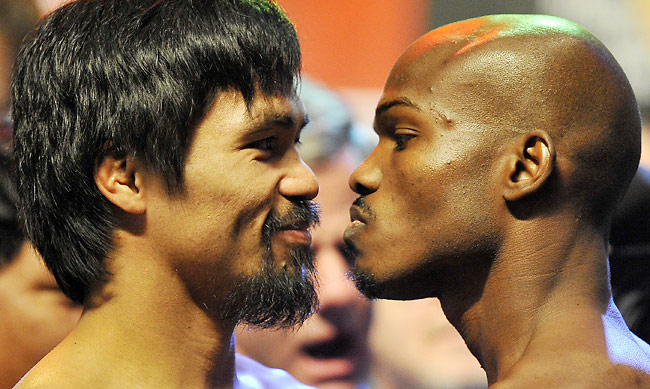 Pacquiao (57-6-2, 38 KOs), once one of boxing’s biggest knockout artists, hasn’t knocked out an opponent since he stopped Puerto Rico’s Miguel Cotto (40-5, 33 KOs) in the 12th round of their welterweight title fight in November 2009 at MGM Grand.

The 32-year-old Bradley beat Pacquiao by split decision in their first fight, but the outcome of that June 2012 match at MGM Grand is commonly considered one of the worst decisions in boxing history. Pacquiao defeated Bradley decisively in their rematch and won a unanimous decision in April 2014 at MGM Grand.

Their rubber match two weeks from Saturday will mark Pacquiao’s first fight since suffering a unanimous-decision defeat to Floyd Mayweather Jr. (49-0, 26 KOs) on May 2 at MGM Grand.