Bradley: Anthony Joshua Has To Knock Andy Ruiz Out

Timothy Bradley, a former two division world champion, believes Anthony Joshua must go for the knockout when he faces Andy Ruiz in a rematch on December 7th in Saudi Arabia.

In the first bout, back on June 1, Joshua was dropped four times before the contest was waved off in the seventh round in New York City.

Ruiz, who came in as a late replacement and a huge underdog, walked away with the IBF, IBO, WBA, WBO world titles. 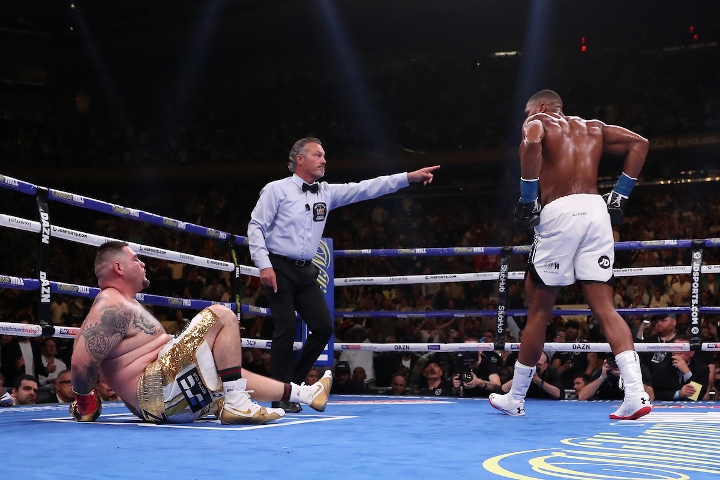 Joshua quickly exercised the contractual clause for an immediate rematch, and he vowed to correct his mistakes.

According to Bradley, Joshua should forget about boxing it out to a decision - and go for the KO win.

“He’s got to knock him out. It was a mental thing and it was a fact that he got caught right on the button. It was a fact that he didn’t train like he normally trains for big fights. He possibly took Ruiz lightly in looking at his physique like - 'oh, he’s nothing,'" Bradley told Fighthype.com.

“Giving him his belts at the weigh-in. Like - 'here, hold my belts' - at the press conference. I’m like 'yo, this dude is being a little bit too nice.' He’s like trying to be the brother-in-law of Ruiz a little bit. I just thought that was odd. I thought all of those gestures were odd.”

On the other side, Ruiz has been slimming down, according to recent photos - and Bradley believes that's a bad idea.

He's concerned that Ruiz might lose some of his rapid power by cutting down on his weight.

“I don’t like the fact that Ruiz is changing his whole look and whole physique. I think that’s going to hurt him, but I think he might speed up with the hand speed. It might speed up, but I’m worried about the power," Bradley said.

[QUOTE=BIGPOPPAPUMP;20136304]Timothy Bradley, a former two division world champion, believes Anthony Joshua must go for the knockout when he faces Andy Ruiz in a rematch on December 7th in Saudi Arabia. In the first bout, back on June 1, Joshua was…

I agree with Bradley on this one. I think Ruiz in his "normal" fighting weight works more confidently. He's been fighting with that weight for quite a while, and was comfortable in it. I don't like a major change in…

[QUOTE=byfbnz;20137536]he never shuts up.[/QUOTE] Lol But he’s been hitting it a little to much Not sure what the fugh hes trying to prove

[QUOTE=MulaKO;20137114]Anybody else thinking Bradley been hitting grandmas old sauce Or is he just talking cause he likes the sound of his own voice[/QUOTE] he never shuts up.

[QUOTE=Ake-Dawg;20137089]Is he worried about appearances or his gas tank and being able to get on his bike to get around Joshua's jab. [B]I don't see how him losing 10 plus pounds of fat[/B] is going to hurt him.[/QUOTE]You're assuming that…