The best fight possible in the still-deep Jr. bantamweight class one year ago lived up to the hype in the ring. It earned a sequel and we’re getting it this Friday and what might be, in-ring, the best card of 2019 so far. The 32-year old World 115 lb. champion Sor Rungvisai (47-4-1, 41 KO) of Thailand attempts the fourth title defense of his second title reign against Mexico’s 29-year old former unified flyweight titlist Estrada (38-3, 26 KO).

Estrada lost by the narrowest majority decision the first time. Can he reverse the call and set up a rubber match or potentially lucrative, years overdue rematch with Roman Gonzalez? On the undercard, TBRB #3 faces #4 at 122 lbs. 28-year old Daniel Roman (26-2-1, 10 KO) of Los Angeles puts his WBA strap up against the IBF belt held by 32-year old TJ Doheny (21-0, 15 KO) of Australia. It’s a strong double on top of what should be a fan friendly show from the Forum. 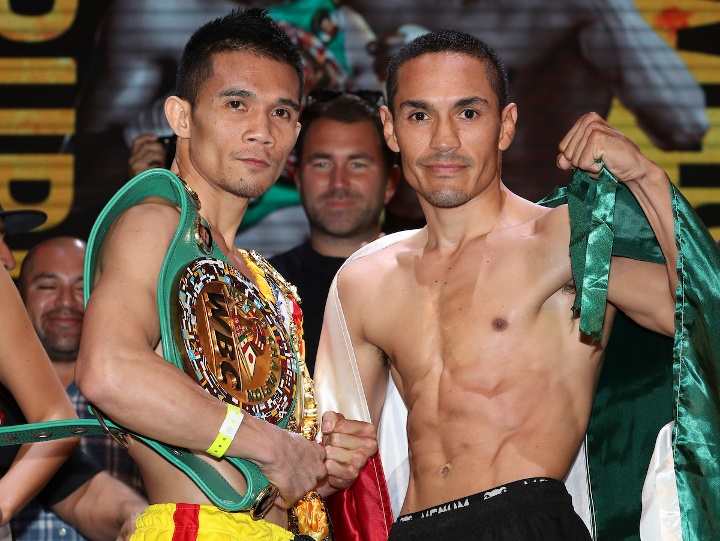 Italy’s 25-year old cruiserweight hopeful Fabio Turchi (16-0, 12 KO) gets another afternoon showing on DAZN as he continues to evolve towards contention. This one is for a WBC stepping stone title so keep an eye on the ratings; Turchi might almost be there. 31-year old Finnish foe Sami Enbom (18-2, 10 KO) has been stopped in two of his last six starts.

Is 21-year old Daniel Dubois (10-0, 9 KO) the man in wait behind Tyson Fury and Anthony Joshua in the UK? He has the size and look of a future force and youth is on his side. Ghana’s Richard Lartey (14-1, 11 KO) took his sole loss by stoppage but that was all the way back in 2014. Could he test the young hopeful?

This well stocked card took a hit this week when an injury to WBO titlist Zolani Tete eliminated the chance to unify half of the bantamweight division. 36-year old WBA titlist Nonito Donaire (39-5, 25 KO) will settle for a defense of his new crown and a chance to move to the finals of the tournament. 30-year old Stephon Young (18-1-3, 7 KO) has the chance of a lifetime to come from off the bench to potentially unified champion in just two fights. It’s a good story. The main event is as well as 30-year old Regis Prograis (23-0, 19 KO) challenges WBA 140 lb. titlist Kiryl Relikh (23-2, 19 KO) for the title and a spot in the finals. DAZN has their best weekend of 2019, by far, on tap.

[QUOTE=Frankie2Jabs;19693334]Boxingscene knows what’s up! But it’s not “TV” per say but Streaming up in dis hoe! WAR DAZN[/QUOTE] You got that right. In any case DAZN does have a good weekend of fights coming up. I'm amped for tonight's card.

Boxingscene knows what’s up! But it’s not “TV” per say but Streaming up in dis hoe! WAR DAZN