Arguably the best heavyweight fight of 2018 gets a sequel this Saturday and it’s a night where the pay-per-view card looks fan friendly before the main event. Deontay Wilder (41-0-1, 40 KO) is must-see TV for more than his power after his 2018 campaign. (photo by Ryan Hafey)

While it’s fair to think he got lucky with the draw against Tyson Fury, his battles with Luis Ortiz (31-1, 26 KO) gave more substances to his career than any of his previous near 40 fights. Can Ortiz change his fate and upend the heavyweight division? Before the main event, Leo Santa Cruz will be in action and there will be a treat at bantamweight as former titlists Luis Nery and Emanuel Rodriguez lock horns. This is a quality Saturday evening on paper. 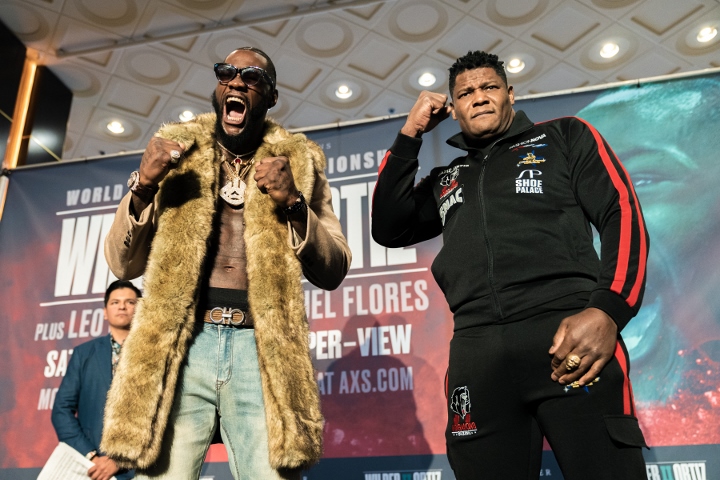 Fans who want a preview of boxing action in Saudi cane get it with this early starter. Catterall (24-0, 13 KO) is the number one contender for the WBO at 140 lbs., putting him in line for unified titlist Jose Ramirez. For now he stays busy, and he’ll hope victorious, against Timo Schwarzkopf (20-3, 12 KO). Schwarzkopf has never been stopped.

If prospects at Jr. welterweight fighting for a two-year promotional deal is your bag, there will be four afternoon fights here. Keep an eye on undefeated Logan Yoon and Darren Surtees as their paths may cross eventually.

One of the best super middleweights in the world, WBA titlist Callum Smith (26-0, 19 KO) hasn’t been able to fully pay off his World Boxing Super Series win in 2019 but he has a decent contender on tap here while he waits for bigger things. John Ryder (28-4, 16 KO) has won four in a row since a split loss to Rocky Fielding.

While Santa Cruz will fight for a vacant super title on Saturday, the rightful WBA titlist going back to Takashi Uchiyama should be Andrew Cancio (21-4-2, 16 KO). It’s shameful what the WBA has done first to Alberto Machado and now Cancio. All Cancio can do is keep winning and he’ll try against a Rene Alvarado (31-8, 20 KO) who has won seven in a row since a loss to Yuriorkis Gamoba.