It’s a family affair the first two nights this week as twin Australians take a step closer to title contention just pounds apart. The better match on paper is probably the first on tap. WBA sub-titlist Andrew Moloney (21-0, 14 KO) is a serious threat to anyone at 115 lbs.

This sort of TV time will only help his chances, even if ratings for the ESPN return of boxing have been lackluster so far. Moloney has Franco (16-1-2, 8 KO) in what should be a fan friendly affair. Franco has been stopped just once and enters off a knockout win following an odd trilogy with Oscar Negrete that ended in Franco’s favor at 1-0-2. 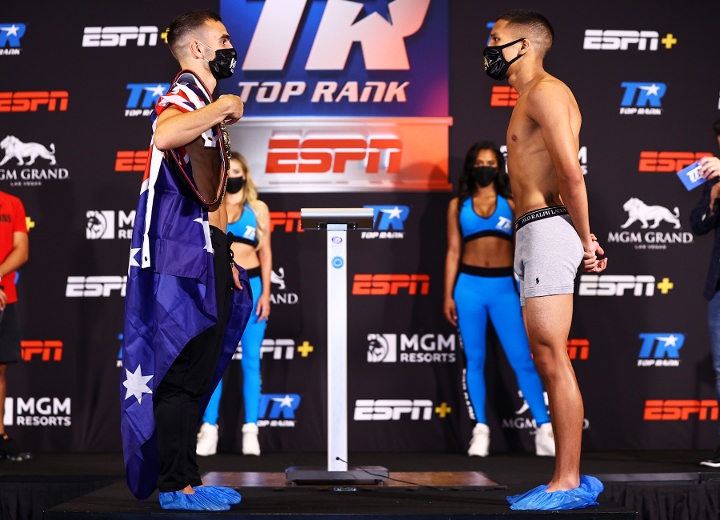 Three pounds up the scale, Jason Moloney (20-1, 17 KO) is looking for a second bite at the apple. In his only loss, Moloney fell short in a split decision for the IBF bantamweight crown to Emanuel Rodriguez in 2018. He’s 3-0 with 3 stoppages since and a strong appearance here wouldn’t hurt his chances to eventually be part of the Naoya Inoue sweepstakes. Opponent Leonardo Baez (18-2, 9 KO) has been stopped just once by future flyweight titlist Julio Cesar Martinez and enters this main event riding six straight wins including a lopsided decision over former title challenger Moises Flores.

Relative to his division, Jr. lightweight titlist Miguel Berchelt (37-1, 32 KO) is in the midst of one of boxing’s most impressive current title reigns. Before he resumes that run, he’ll dip his toe in the water at lightweight for some non-title action. Berchelt will face Eleazar Valenzuela (21-13-4, 16 KO). Valenzuela has been stopped three times including his last outing late in 2019. Don’t expect this to be much more competitive than the last late night Saturday affair in this series but, like Emanuel Navarrete last weekend, Berchelt can make a workout more interesting than most.

Glad we have three beautiful boxing card events. I am thankful. :boxing: