Boxing was back on the air last week but the ratings say many viewers are still waiting for a little bit more than just any old fights. They missed some pretty good stuff last Thursday. There might be some fun to kick off the week here. One of the fun things about Top Rank getting into the Naoya Inoue business is paying attention to the people around the bantamweight banger’s weight that might factor into his future.

Joshua Greer (22-1-1, 12 KO) is #2 in the IBF ratings, in line for a crack at one of Inoue’s belts. Greer is unbeaten since a narrow four round loss to the talented Stepehn Fulton in his fifth fight. Plania (23-1, 12 KO) is rated in the top 15 by both the WBA and IBF with eight straight wins since dropping a decision to former titlist Juan Carlos Payano in 2018. This could be an interesting main event. San Diego welterweight Giovani Santillan (25-0, 15 KO) is also on the card against former lightweight titlist Antonio DeMarco (33-8-1, 24 KO). 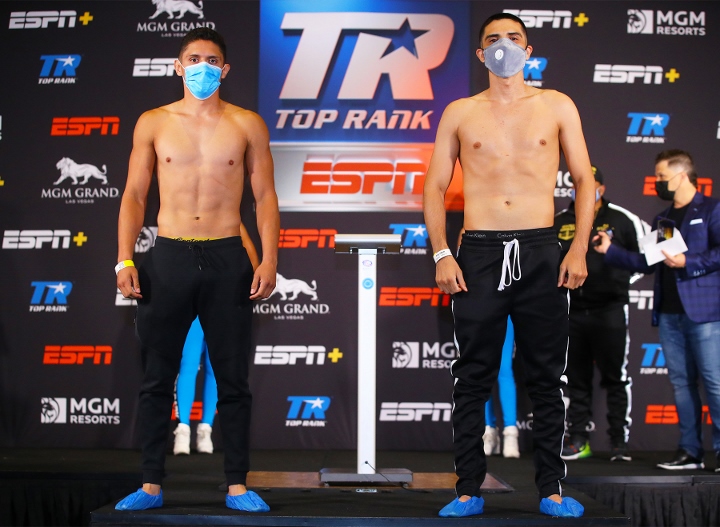 Two division former titlist Jose Pedraza (26-3, 13 KO) has lost two of his last three but that happens sometimes when tackling tough competition. Pedraza came up short against Vasyl Lomachenko in a lightweight unification clash and stumbled in his Jr. welterweight debut against the tough Jose Zepeda. Thursday, it’s a bit of a crossroads fight at 140 lbs. Pedraza will try to navigate back to winning ways against former title challenger Mikkel LesPierre (22-1-1, 10 KO). LesPierre’s only loss was a long night in challenging then Jr. welter beltholder Maurice Hooker. Stockton lightweight favorite Gabriel Flores (17-0, 6 KO) will also see action.

One of boxing’s busiest fighters since defeating Isaac Dogboe for a belt at Jr. featherweight, Emanuel Navarrete (31-1, 27 KO) is another fighter with an eye on Inoue. His body might not let him stay within a division of Inoue for long. Navarrete will do business at featherweight here and don’t expect too big a challenge. Opponent Uriel Lopez (13-13-1, 6 KO) has lost three straight by decision and been stopped three times.

This is lame. Tune ups are unnecessary for fighters who fought in less than a year or haven’t suffered an injury in training or post their last fight. This isn’t how you’re gonna get viewers to watch with cards like…