What really needs to be said about this heavyweight showdown? Wilder (42-0-1, 41 KO) attempts his eleventh WBC title defense against the only man he hasn’t defeated. Fury (29-0-1, 20 KO), for those who recognize the claim, attempts his sixth defense of history’s crown. The first time, they fought to a memorable if debated draw. It feels like this time we get a winner.

Don’t be surprised if a clash between former heavyweight titlist Charles Martin and former challenger Gerald Washington turns into a wild show stealer on the night. Exciting Jr. featherweight titlist Emmanuel Navarrete is also in action. Call your friends. It’s a heavyweight night. 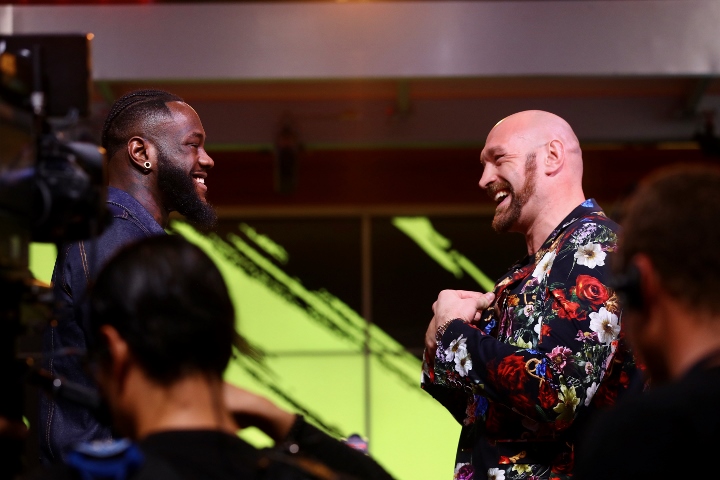 Fans who have been following the Golden Contract tournament at Jr. welterweight will be one step closer to the final after Friday. Ohara Davies (20-2, 15 KO) faces off with Jeff Ofori (10-1-1, 3 KO) while Tyrone McKenna (20-1-1, 6 KO) squares off with Mohamed Mimoune (22-3, 3 KO). Tournaments like this, or the Showtime super middleweight tournament that wasn’t the Super Six years ago, can be a lot of fun and this one is headed towards a solid finale.

Lightweight hopefuls take center stage for this one. Ruben Torres (11-0, 9 KO) is yet another youthful prospect in the robust 135 lb. field with uncommon range at nearly 6’ tall. Gabino Cota (19-10-2, 17 KO) has been around the block and been stopped five times getting there.

There’s a little late night action at flyweight on tap and it could be good. Jonathan Gonzalez (22-3-1, 13 KO) makes his first start since a knockout loss in challenging Kosei Tanaka for a belt last summer. Saul Juarez (25-10-2, 13 KO) is a multiple time failed title challenger hanging on for one more shot. He too enters off a loss to former champ Ganigan Lopez. This is on the fringes at 112 lbs. but it could be fun.

Prospect action tops the bill at Jr. featherweight in the hours before the big one. Lucien Reid (8-0-2, 4 KO) might be a contender one day but we’re not there yet. The same might be said for Brad Foster (11-0-2, 4 KO). Will one of them get their first loss on the ledger...or will both earn their third draw together.