BoxingScene.com's Pick of The Week - May 31

A late replacement, 29-year old Andy Ruiz (32-1, 21 KO) makes a quick turnaround from an April contest to find the biggest opportunity of his professional career. He has a chance to upset 29-year old British stadium phenom Anthony Joshua (22-0, 21 KO) in Joshua’s US debut at the Garden. Joshua isn’t just arriving with the WBA, IBF, and WBO belts.

He’s arriving to begin the next phase of his professional life. Joshua is already one of the biggest money draws in boxing but US revenue is still the biggest fountain of cash in the game. It’s the lead on a solid card that will feature Callum Smith defending the WBA super middleweight crown and Katie Taylor looking to finish her unification of the lightweight division. Additional undercard action kicks off at 5:30 PM EST. 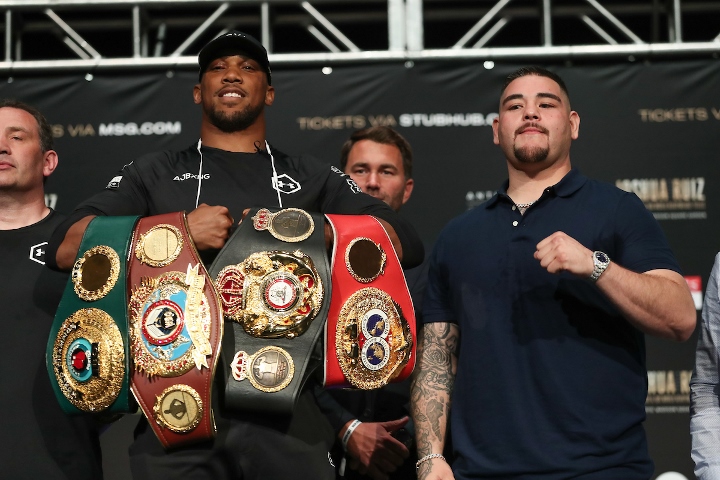 Before Saturday action gets underway, there will be some welterweights throwing down in Argentina. 29-year old Gustavo Vittori (22-5-1, 12 KO) has lost three of his last five and been stopped three times in his career. 24-year old Carlos Santana (15-2, 3 KO) has never been stopped and doesn’t do much stopping either but has won two in a row.

Early afternoon flyweight action will be streaming from the UK. 28-year old Welshman Jay Harris (15-0, 8 KO) is rated #8 by the IBF and is in the top fifteen for the WBC and WBO. Spain’s 35-year old Angle Moreno (19-3, 6 KO) is coming off a failed title attempt against WBC titlist Charlie Edwards and has never been stopped. This will be a good gauge of where Harris is on the road to title dreams.

32-year old former Jr. welterweight and welterweight titlist Devon Alexander (27-5-1, 14 KO) of St. Louis has had bad luck his last two outings. A case could be made he earned the wins against Victor Ortiz and Andre Berto but he left those contests with a draw and loss, respectively. 33-year old Ukrainian Ivan Redkach (22-4-1, 17 KO) has won two straight after losing two in a row. Neither is rated by any major sanctioning body so a loss would push them closer to gatekeeper status if they aren’t there yet.

31-year old Jr. featherweight Luis Cusolito (27-3, 21 KO) enters off a loss to Javier Chacon. 25-year old Argentine countryman Diego Ruiz (20-2, 10 KO) has won nine in a row and is rated in the top fifteen by the WBO at bantamweight.