So often, the true superfights let us down.

Oscar De La Hoya’s fights with Felix Trinidad and Floyd Mayweather, and Mayweather’s fights with Saul Alvarez and Manny Pacquiao, smashed the box office. They weren’t smashing in the ring. The same was true of Lennox Lewis’s bouts with Evander Holyfield and Mike Tyson. For all the business they did, none was what anyone would call a classic.

It’s a special thing if a fight delivers in all facets. When the build, anticipation, and pageantry culminates in a fight full of drama, violence, shifts of momentum, and a decisive winner, everything boxing fans can ask for has been delivered. They’re the fights the most people are still talking about twenty years later for all the right reasons.

After a rematch with conqueror Tyson Fury failed to materialize, Wladimir Klitschko and Anthony Joshua turned to each other. A Dempsey versus Tunney-like mass of 90,000 fans packed Wembley Stadium to see a clash of old and new. US networks HBO and Showtime worked a rare deal where both agreed to air the fight. The 41-year old Klitschko, 1996’s Olympic Super Heavyweight Gold medalist, was fighting to return to the top and keep his career alive. The 27-year old Joshua, 2012’s Olympic champion in the same division, was fighting for validation against the biggest name and most proven force available.

It was the perfect crossroads fight on paper. Would Klitschko be too old, too inactive, to hold up his end? Was Joshua too inexperienced, too unprepared, even with an IBF belt in tow? Based on what he had faced before the Ukrainian great, Joshua was barely more than a professional prospect. Klitschko represented a gamble that the talent and youth of Joshua was ready for anything. 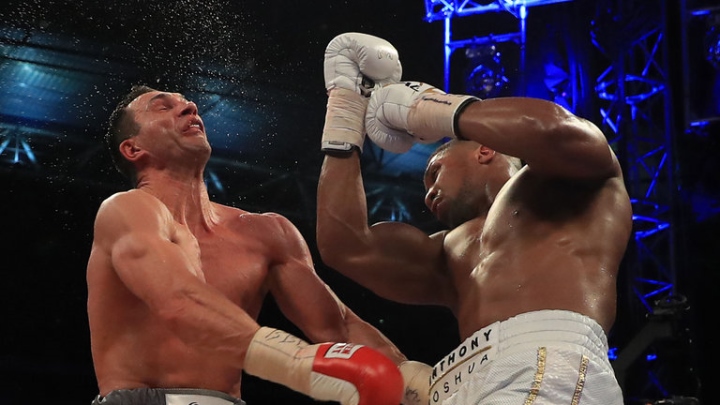 Over eleven sensational rounds, we learned about the depth of both men. Klitschko, his chin always considered a liability, hadn’t been on the floor in almost twelve years. Joshua had never experienced the gut check of having to survive a hard visit to the deck. By the end, both men would come off the floor to show their courage and will to win.

As covered here at BoxingScene:

Klitschko came out pawing with his usual jab, before getting hit with quick right hand by Joshua. It wasn't long before Joshua was using his own jab. Joshua was landing some quick shots, but none of them were landing too clean.

Klitschko started the second with a big right and then Joshua came firing back with both hands. Joshua was showing a very solid jab that was mostly a range finder for him. Klitschko was using angles and trying to time Joshua for a counter punch.

Joshua rushed in with a few punches that missed the mark in the third. He was coming forward and letting his hands go, looking to apply more pressure on Klitschko. Joshua continued to jab with Klitschko in every minute.

The fourth started with Klitschko landing a good right hand. Joshua did not allow him to follow up and not longer after he clipped Klitschko with a right hand, but it didn't land flush. There was some holding when either guy came inside.

Joshua attacked Klitschko with a big variety of punches to drop him, and cut him, early in the fifth round. Klitschko was in trouble, but he managed to recover and started tagging Joshua with punches to get the young lion in some trouble. Klitschko worked him over for most of the final minute.

Joshua looked tired at the start of the sixth, likely after throwing so many punches while trying to finish Klitschko off a round earlier. Klitschko was coming on and then drilled Joshua down with a huge hook. It was the first knockdown of Joshua's career. Klitschko was unable to finish him off.

Klitschko was coming forward with a lot of pressure in the seventh, landing a lot of punches and controlling the fight as Joshua seemed tired.

In the first eighth round of Joshua's career, Klitschko was working his jab and looking to land power shots. Joshua was able to duck away from any of the incoming bigger shots. Joshua was starting to get his hands going again, but not really landing much of anything.

Joshua was starting to go more often to the body in the ninth…In the tenth, Joshua came out swinging early on with a combination before composing himself. Klitschko was throwing a lot of jabs. There was a clash of heads at the end of the round that seemed to really swell up the left side of Joshua's face.

The fight had everything. Klitschko’s dramatic rally in the fifth further defined him for all time, a testament to the courage it took to recover from early career stumbles to dominate the class for close to a decade. Joshua survived a bomb from one of the history’s great punchers and showed he could find a second wind in a war.

We’ll still be talking about it twenty years from now.

A handful of hardcore followers of the lower weight classes warned that Thailand’s Srisaket Sor Rungvisai, a former titlist in the 115 lb. class, was a serious challenger for undefeated four-division beltholder Roman Gonzalez. Seeing was believing for most and it didn’t take long on the March undercard of Gennady Golovkin-Daniel Jacobs. Gonzalez was on the deck in the first and, just as had been the case in his previous fight with Carlos Cuadras, the great Nicaraguan found himself in a war.

As discussed in the post-fight report card:

It’s hard to find many who scored this fight of the year contender for Gonzalez and readers won’t find that here. The final tally on this card favored Gonzalez in six rounds with five to Sor Rungvisai and one even. Others saw it wider for Gonzalez but due credit to the now two-time Thai titlist. He dropped Gonzalez early and gave him hell for all of twelve rounds.

Prior to the fight, it said here that he was a live underdog and the best puncher Gonzalez has ever faced. Both were proven true. Where Gonzalez deserves acclaim is in the way he adjusted. Busted open in more than one spot by repeated incidental head butts, Gonzalez showed how effective he can be defensively at close quarters. Sor Rungvisai landed plenty; it was a high output affair. However, Gonzalez did an excellent job slipping and picking shots with his gloves while landing more and surpassing the challenger’s output.

It was a great fight made greater by the final three minutes. Gonzalez, who had seemed to be slowing in the eleventh, dug deep for maybe the finest three minutes of his career to date. He went on the attack, looking to seal victory, and had Sor Rungvisai in a retreat we’d not seen all night. The decision went against him, but the will to win he displayed, the character in that last stanza, shouldn’t be forgotten…As to the victor, a lot of fight fans didn’t know Sor Rungvisai before a week ago. They know him now and they’ll be happy to see him again after this war.

Fans knew Sor Rungvisai even better when he knocked Gonzalez out in the rematch, a reminder that lightning seldom is captured in the same bottle twice. It took nothing away from a first fight that colored both men in glory. Most other years, it would have won top honors. It was a classic no matter the date.

Badou Jack-James DeGale was an early candidate for fight of the year. The Super Middleweight unification fight ended in a draw that appeared a little lucky for DeGale. He lost a tooth but kept his share of the title in a bruising affair that saw both men dig deep…Golovkin’s long awaited showdown with Saul Alvarez was another superfight that delivered. The draw had its detractors but the fight left little to complain about with Alvarez starting and finishing strong while Golovkin made his luck everywhere in between…Boxing’s consummate warrior this decade, Orlando Salido, had one more war in him before suffering a stoppage against Miguel Roman…On the undercard of Sor Rungvisai-Gonzalez II, Juan Francisco Estrada erased an early deficit on the cards to drop Carlos Cuadras and earn a narrow decision in a fantastic all-Mexican clash…Dominic Breazeale and Izuagbe Ugonoh took turns sending each other to the floor in another excellent heavyweight clash over the winter. Breazeale was the last man standing after five wild rounds…Should anything additional come out of Japan on New Year’s Eve, this section has room for amendment.