AS each day passes it seems as if a formal announcement for a June clash between Anthony Joshua versus Jarrell Miller in the USA moves closer.

There had been high hopes, all be it with low expectations, for Joshua to unify against WBC champion Deontay Wilder, or go onto an all-British clash with Tyson Fury, given Team AJ had Wembley Stadium reserved for April 13.

Then, as Wilder and Fury neared an agreed rematch, it left Joshua’s old rival Dillian Whyte as the man many felt the triple champion would stare down next.

The public appetite is whet for any of the following; Wilder-Fury, Joshua-Fury, Joshua-Wilder. The UK fans would make do with Joshua-Whyte while the US market would likely prefer Joshua-Miller.

And so here we are. Investigate

It is an odd circumstance, where the man with three of the four major belts is on the outside looking in but when you probe closer it’s easy to see how it has happened.

Members of Team Fury and Team Wilder will not be filling out forms for the AJ fanclub any time soon, united by a disdain of a negotiating arrogance, perceived or otherwise.

Whyte would have been aware that, with Wilder and Fury heading towards a rematch, it would have left him as the sole viable Wembley option which meant he could drive as hard a bargain as he chose to. The fight was there if he wanted it, but if he didn’t need the terms on offer and he knew that he could orchestrate this huge reshuffle that sees the long-held Wembley date die and the gap in between Joshua fights grow to be the longest of his professional career.

It will have been nine months since he faced Alexander Povetkin in his last contest.

Whyte was like the football agent who knew his client, let’s say a superstar defender, would plug the whole in a leaky defence of a cash-rich club. He knew his value to Joshua and Matchroom was more than it was not just in comparison to any other fighter but he knew that he could charge more than his market worth because he was the only man for the job. Sure, he overcharged and is now backing himself once more to overturn another top-ranked fighter to maintain his own high ratings with the WBC and WBO but he knew that if he did not dance with Joshua in London then no one else could.

Maybe he was calling their bluff and ultimately held out for too much, but he will also doubtless gain a semblance of satisfaction in forcing his rival to take his show on the road, knowing how limited Joshua’s realistic options were.

The whole thing has put Joshua in a corner. Yes, he can come out of that corner verbally fighting. Yes, his management and PR team can limit any perceived damage. Yes, they can put a spin on the Miller fight and the meaning behind it and yes, they can keep telling us the narrative about it being time for Joshua to crack the US market. It might even add to his overall commercial value by the time it’s all done.

But the truth is no one, bar perhaps Miller and those standing to make hefty financial gains from the fight, wants it – certainly not as a first choice. Not Joshua, not promoter Eddie Hearn, not this writer and not the person reading this. But it is the only fight that can be made that makes any kind of sense and fits any kind of story that does not involve Fury, Whyte and Wilder. And you never know, if it delivers in the ring then none of us will be complaining afterwards.

Make no mistake, however, the Fury and Wilder fight and their unfinished business has forced Joshua into some sort of purgatory.

Yet the value Team Joshua has of itself is exorbitant. It’s beyond boxing. And that is clearly where they have positioned their own brand in the market.

Everyone has to pay, whether it is fans, opponents, whoever, for their premium product.

That is not a knock; it is an assessment. 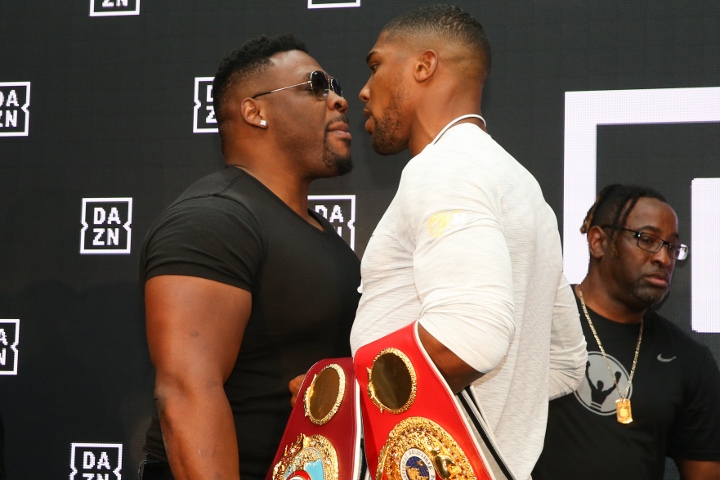 Public sentiment has begun to turn against Joshua. He remains terrifically popular and an iconic trademark to general sports fans, but there are thousands upon thousands who are now of the opinion that if he fights anyone bar Wilder or Fury then it does not count.

And imagine if Wilder-Fury, set to reconvene in April or May, has a different outcome and they go to a trilogy. The three-belt world champion would be frozen out of his own division. Of course, we know in this sport that – to almost every fan’s detriment – these fights do eventually happen, just far further down the line than we would like. We want them now, but since when did the fans really matter at the top of this sport?

We will wait, as we always do. And the price will go up and the potential audience still swells in a bizarre anticipation with the overhanging question about what would have happened if they fought when we first wanted it.

But for all intents and purposes it looks as if it will be Joshua-Miller in June, with a bold attempt to steal some thunder from the aftermath of Wilder-Fury II.

And the AJ launch into the USA will create a good deal of intrigue for those interested in seeing how he is truly received in America, at the box office and on DAZN in a prime time slot. And let’s not be fooled, Miller scarcely has a walk on role with that, even though he is likely to play an active part in talking up a storm. Joshua will go through the usual US talkshows, having to explain why he was not a part of the big fight a month or two earlier while saying he is not overlooking Miller and trying to sell that product.

But there will be detractors who do not understand why Joshua is in this almost self-imposed wilderness.

And unfortunately for him it has become fashionable to slate his every turn and negotiation. He had told a nearly 30-stone Tyson Fury to get in shape and he would fight him and then, with Fury in good shape, the calling stopped. Then there was the fifty million to fight Wilder, if the American and his team fronted the money. Team Wilder said the money was on the table and it still did not happen. Then it was how he’d fight Whyte if he couldn’t get Wilder or Fury, because, according to the Matchroom two-fight announcement with Wembley ‘Boxing was coming home’ and he did not want fans to have to travel. Now, according to Whyte, there is no Whyte.

So Fury got in shape, the fifty million did not count, there is apparently no Dillian rematch, Wembley has gone... If Miller was not a priority for Joshua or his team, why should he be for the fans?

Yet you see the business. Joshua will push DAZN and they will push him. It’s a good fight for them and, of course, they need it. And if it increases his market value in the US it will only assist in him turning the screws on potential opponents, squeezing down their prices by per cent after percent.

That’s the business. That’s boxing. But there will come a point when the noise will be deafening and the public will insist upon a unified heavyweight world champion and the champions will have to give them what they want. Sadly, that time is a way off yet.

Quote: Originally Posted by PunchyPotorff View Post Not familiar with this writer, but not buying at all his assertion "self-imposed wilderness" for Joshua. Yes, THE biggest $$ fight for at least the first half of the year will be Fury/Wilder…

[QUOTE=Lazy Jab;19488082]Aj should keep the date at Wembley. He can shadow box for 12 rounds..let's see how well he sells[/QUOTE] It's funny cos he'll still sell it out. When your looking at AJ fights, most who attend will have no…

I've lived through enough of these type of situations to know the outcome. The outcome will be a lot of revisionist history

[QUOTE=Jasonlboro;19486958]Tris Dixon is normally a knowledgeable writer, so i’m Surprised by this piece. Has the PBC given him some of that Lennox money? How can you write this article without addressing that Hearn has made 60/40 offers to both Fury…

[QUOTE=Jkp;19488713]Thanks for the lesson in "low balling" and how to ensure a fight NEVER gets made. Eddie sure is has mastered this art. Eddie/AJ has all the money and resources in the world to make a fight with AJ/Fury/Whyte, and…