On August 3rd Michael Conlan (11-0) will have a chance for revenge.  He will face his rival from the 2016 Olympics,, Vladimir Nikitin (3-0) in Belfast, Northern Ireland.

The 27-year-old Conlan lost a controversial decision to Nikitin in their quarterfinal match in Rio. He reacted by raising his middle finger at the judges and delivered a profanity laced tirade in his post fight interview  and accused the officials of corruption.

If he is victorious, Top Rank chairman Bob Arum said that there are a lot of different directions he can go. 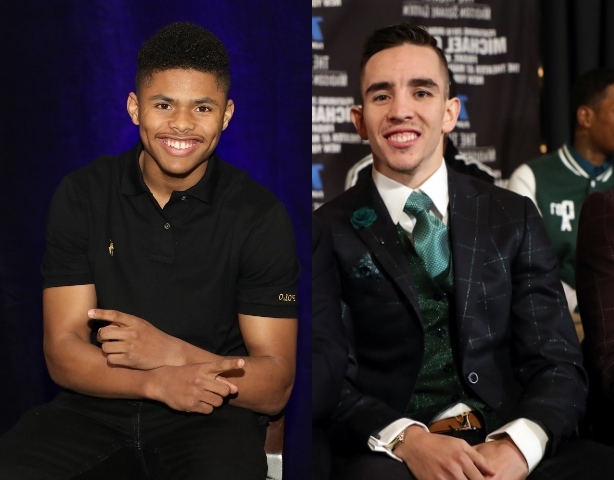 Top Rank also has another rising featherweight talent in Shakur Stevenson (11-0).  The 21-year-old 2016 Olympic silver medalist will headline his first card on July 13th when he faces Hairon Socarras in his hometown of Newark, NJ that will be aired on ESPN.

In his last bout on April 20th he dominated former title challenger Christopher Diaz over 10 rounds.  Arum is very impressed with the way he has progressed as a fighter.

“Shakur Stevenson is really a phenomenal product. I mean he is getting better, he is finding his man strength. He will be fighting for the featherweight championship sooner rather than later,” Arum stated.

The high praise didn’t stop there.  Arum believes that Stevenson has what it takes to become a generational talent.

“I really think he will be – you never know – but I would say equal if not better than Mayweather,” said Arum.

These are two of the worst photos of either guy on line, absolute garbage. They look like extras from Lord of the Rings.

Murder? He was charged a year ago with a misdemeanor. Slightly worse than an overdue library book. The fight was a set up to provoke a fight and shake him down for money. They'll cash in and Stevenson will now…

He was charged a year ago for a misdemeanor. Probation at most. [QUOTE=Eddy Current;19822647]Is Shakur going to jail for almost murdering that guy? Seems like he should probably do some time for that one.[/QUOTE]

i know arum will never do it, but its a sin if conlan and stevenson dont fight each other as prospects.

[QUOTE=Eddy Current;19822647]Is Shakur going to jail for almost murdering that guy? Seems like he should probably do some time for that one.[/QUOTE] I'm the last person on earth to say someone should go to prison (ive done worse than most…