Blair Cobbs Gets Off The Floor To Drop, Stop Carlos Ortiz

LAS VEGAS – This wasn’t the flair for the dramatic Blair Cobbs had in mind in the first round Saturday night.

Carlos Ortiz surprised Cobbs by knocking down the welterweight prospect late in the opening round. Cobbs survived that early trouble, dropped Ortiz in the sixth round and won by technical knockout before the seventh round started on the Canelo Alvarez-Sergey Kovalev undercard at MGM Grand Garden Arena. 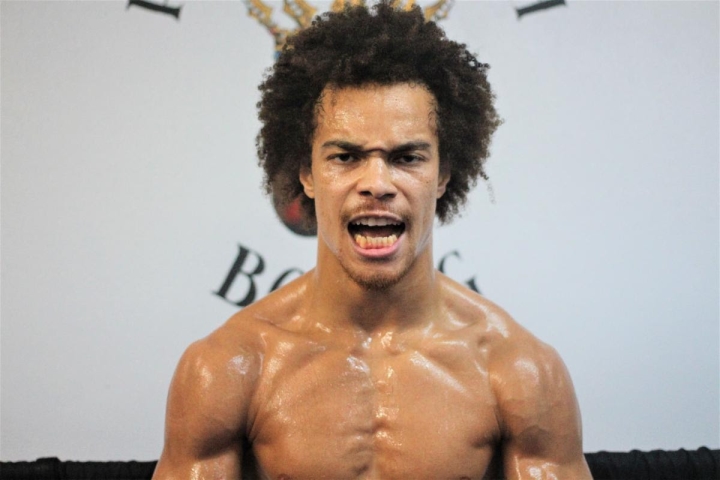 Ortiz (11-5, 11 KOs), of Torreon, Mexico, lost a fourth straight fight and suffered the second TKO defeat of his career.

“It was a wonderful performance,” Cobbs told DAZN’s Chris Mannix after his win. “I tip my hat off to my opponent. He’s a tremendous athlete. He has tremendous power. All of his wins come by way of knockout. He caught me with one good shot in the first round, and I doubled back and came back. I am the definition of perseverance and I am the most exciting fighter today, Blair ‘The Flair’ Cobbs. Whoooo!”

Cobbs’ counter right hook knocked down Ortiz 23 seconds into the sixth round. Ortiz got right to his feet, prevented Cobb from building on that momentum and made it to the end of the round.

Ortiz still wasn’t allowed to start the seventh round.

Cobbs unloaded a four-punch combination to Ortiz’s body with about 45 seconds remaining in the fifth round. He followed that flurry by catching Ortiz with a right hook to the head.

Cobbs connected with an overhand left just before the fourth round ended. Ortiz’s straight left clipped Cobbs with about 40 seconds to go in the third round.

Cobbs took a careful approach for much of the second round because Ortiz knocked him down near the end of the first round. Cobbs connected with a right and a left with about 45 seconds to go in the second round.

Just after the 10-second warning to end the first round, Ortiz drilled Cobbs with a straight left hand to made Cobbs use his left glove to keep from falling to the canvas. It counted as a knockdown because Cobbs’ left glove touched the canvas.

Cobbs shook his head to let Drakulich know he was OK. The bell sounded to end the round before the action could resume.

“[The knockdown] didn’t change anything,” Cobbs said. “I got right back on my horse and kept persevering and kept working my plan, and kept boxing excellently, breaking him down, throwing body shots, head shots, mixing it up. And then I got a little bit dangerous with it. I got a little bit closer. I stopped moving and I got that knockdown, baby.”

Yup, lots of holes in his game but damn he's fun to watch!!

[QUOTE=vwelsh;20160354]Love this dude. Super fun and funny. I just like that he comes to fight. Good bad or indifferent. It’s going down. Would like to see him beat someone of significance just to see the interview afterwards.[/QUOTE] I have to…

No defense, Awkward, wild, entertaining and talks much crap. The making of a Champion .... Woooooooooo!!!!!

[QUOTE=bcalvert;20160344]LOLOL This kid is hilariously annoying![/QUOTE] He can carry an interview that's for sure. He needs some fine tuning and polish on his style but his mic work is a mixture of WWE and Chael Sonnen.