A middleweight title will be at stake on Saturday, June 23, live and exclusively in the United States on ESPN+ — the recently-launched multi-sport, direct-to-consumer subscription streaming service from The Walt Disney Company's Direct-to-Consumer and International segment, in partnership with ESPN.

From the O2 Arena in London, Billy Joe Saunders will defend the World Boxing Organization (WBO) middleweight title against veteran Martin Murray, undefeated heavyweight sensation Daniel Dubois (7-0, 7 KOs) will take on Tom Little for the vacant British title, and unbeaten light heavyweight Anthony Yarde (15-0, 14 KOs) will face an opponent to be named. Saunders-Murray coverage will start at 5 p.m. ET, while undercard action will be shown beginning at 2:30 p.m. ET.

"I'm delighted that the WBO middleweight world title showdown between Billy Joe Saunders and Martin Murray will be shown live in the United States on ESPN+," said Frank Warren, the event's promoter. "I'd like to thank Bob Arum and Todd duBoef of Top Rank for making this happen. There's a lot on the line for Billy Joe and Martin and I'm predicting a brilliant fight for the fans. This is a brilliant opportunity for our young guns Daniel Dubois and Anthony Yarde to showcase their skills to the American audience." 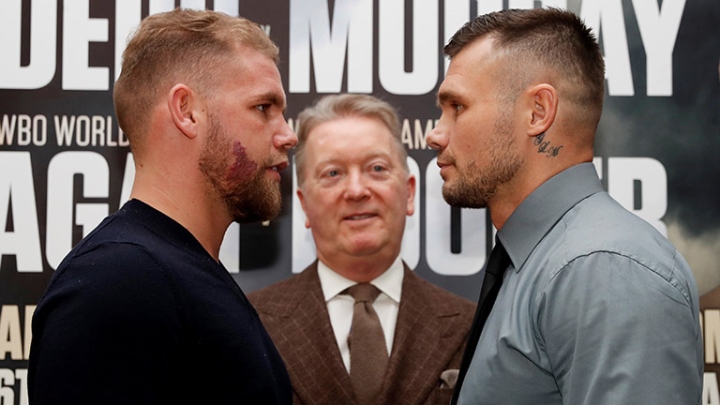 Saunders (26-0, 12 KOs) will be making the fourth defense of his world title against Murray (36-4-1, 17 KOs,), a four-time world title challenger riding a three-bout winning streak. Saunders won the world title with a majority decision over Andy Lee on Dec. 19, 2015 in Manchester, England and has gone the distance in each of his title defenses.

In his last bout, on December 16 of last year, he put on a boxing clinic in befuddling the hard-punching David Lemieux en route to a clear unanimous decision. Saunders possesses the only middleweight world title not held by Gennady Golovkin.

Murray, who lost a split decision to Arthur Abraham for the WBO super middleweight title in November 2015, has had three previous cracks at middleweight world titles. He was held to a controversial draw against Felix Sturm for the WBA crown in 2011, lost a disputed unanimous decision to WBC champion Sergio Martinez in 2013, and was knocked out in the 11th round by unified champion Golovkin on Feb. 21, 2015 in Monte Carlo.

[QUOTE=.!WAR MIKEY!;18757122]psssh I have espn+ but im not liking that fights have to go there. espn+ has alot of old fights for those history buffs etc who like to see old fights.[/QUOTE] That's a better selling point for $5 a…

I hope that his bombs for ESPN+. It's another shakedown of the fans.

Murrey just has to land one good bomb. anything can happen otherwise its easy money. I give BJS a shot at outpointing canelo or GGG. Hes better than i thought.