The opponent search for Billy Joe Saunders’ next fight has been narrowed down to one—but not yet final and still on the hunt.

More than a month after establishing plans for his United States debut, England’s Saunders (28-0, 13KOs) soon hopes to attach a name to the first defense of his super middleweight title, which will take place Nov. 9 at Staples Center in Los Angeles, Calif. Topping the short list of opponents is Marcelo Esteban Coceres (28-0-1, 15KOs), an unbeaten contender from Santa Fe, Argentina who similarly would also fight stateside for the first time in his career.

The bout is already listed on boxing database website BoxRec.com, although the fight is not yet official, nor is Coceres the absolute final choice for the fight. Sources on both sides of the Atlantic have informed BoxingScene.com that such a match is still pending approval and with work to be done even beyond that point to declare the fight official. 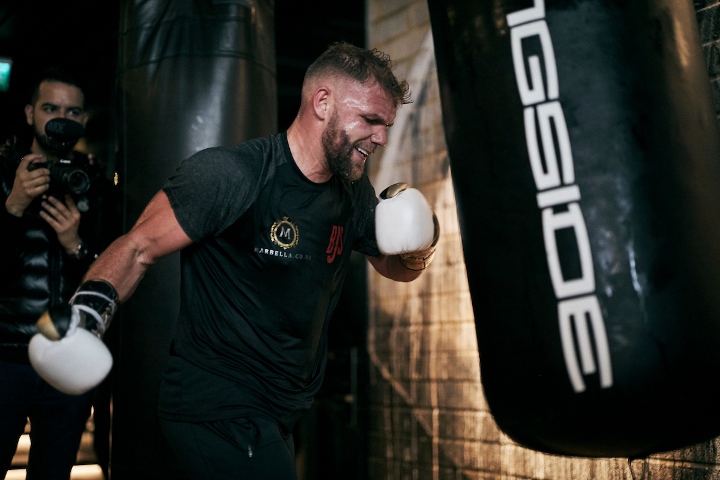 Representatives from Matchroom Boxing, DAZN and Sky Sports all declined comment as negotiations are ongoing for the fight, which, if finalized, will serve in supporting capacity to the rematch between YouTube celebrities KSI and Logan Paul, both of whom will make their respective pro debuts. The card will stream live on DAZN in the United States and air live on Sky Sports Box Office in the United Kingdom.

The potential selection of Coceres is a far cry from previous plans to have Saunders—a 30 year old southpaw whom represented Great Britain in the 2008 Beijing Olympics—face an U.S.-based opponent for his first stateside appearance, although probably a better choice given the alternatives. As the fight will be for Saunders’ World Boxing Organization (WBO) middleweight title, the options for a WBO-approved challenger were fairly limited based on that criteria.

Coceres would be moving up in weight for his first career title fight, having spent the entirety of his near-eight year career at home in Argentina. A clash with Saunders represents a significant leap in competition level, with his most notable win coming versus countryman and former title challenger Sebastian Lujan, scoring a 10-round decision in their Jan. 2016 clash.

Saunders became a two-division titlist following a 12-round win over Shefat Isufi this past May in Stevenage, England, mere miles from his Hatfield hometown. The win was his first on a title stage since the last successful defense of his WBO middleweight strap, serving up a boxing lesson to former titlist David Lemieux in his Dec. 2017 North American debut in Laval, Canada.

The win over Lemieux would turn out to be his last as a middleweight. His next fight would have served as his second straight fight on the continent, further south and in the US for a title defense versus unbeaten Demetrius Andrade which was due to take place last October in Boston, Mass. Saunders lost out on that opportunity—as well as his title—after testing positive for trace amounts of the banned substance Oxilofrine. Efforts to alibi the testing anomaly in claiming it came from a nasal decongestant ingestion fell on deaf ears among the Massachusetts State Athletic Commission, which denied him a license for the event.

The ruling had a ripple effect, as the WBO deemed the situation as Saunders being unfit to defend his title. The belt was declared vacant and up for grabs in the rescheduled headliner, with Andrade winning a 12-round decision over late replacement Walter Kautondokwa.

Two wins have since followed for Saunders, a 4th round stoppage of Charles Adamu in a Dec. 2018 clash well above the light heavyweight limit, followed by his aforementioned decision over Isufi to win the super middleweight strap.

The scheduled Nov. 9 appearance will mark Saunders’ first official fight under the DAZN banner since inking a promotional contract with Matchroom Boxing this past August.

Then why people are more turning to watch UFC.

[QUOTE=whoseyourdaddy;20108772]In order to achieve that, he needs to enroll in VADA testing but he is ducking VADA more than he ducks Andrade.[/QUOTE] yeah you are right . I hate Saunders but he does have talent and it would be interesting…

[QUOTE=el***;20108612]This Uber driver that Saunders is fighting, his last fight was against someone who is 7-5-5, he last fought someone with more losses and draws than wins. The WBO should be embarrassed to sanction this as a title defense. Saunder's…

[QUOTE=skinnystev;20108326]this guy Marcelo Esteban Coceres has never fought above 160 lbs he's a middleweight he's ranked number 42 in the world at middleweight unranked at 168[/QUOTE] So he’s the perfect opponent for BJ