Billy Joe Saunders: Eubank Will Defeat Groves - But Not Me

The all-British clash will take place at the Manchester Arena on February 17.

In the first round of the tournament, Eubank went to Stuttgart in Germany on October 7 and crushed Avni Yildirim inside three rounds. And Groves excited in London on October 14 when he stopped countryman Jamie Cox at the SSE Arena with a fourth round knockout via body shot. 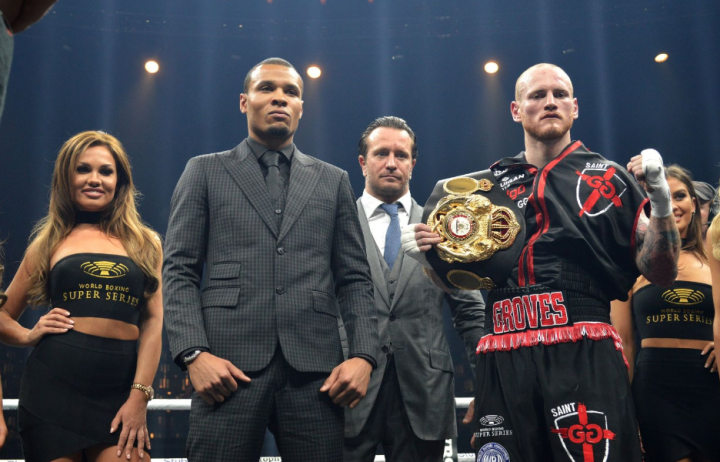 WBO middleweight champion Billy Joe Saunders is the only man to defeat Eubank - and he's picking his former opponent to defeat Groves.

“I think that Eubank will beat George Groves. If he does what I think he will against Groves people will be talking. I think there is a 75 percent chance that Eubank wins,” Saunders said to Boxing News.

Saunders believes Groves' chin is just not good enough to overcome the obstacles in the fight.

Saunders, who returns on April 14th against Martin Murray at the O2 Arena in London, is very confident that he would beat Eubank in a rematch.

He defeated Eubank in the fall of 2014. Since that loss, Eubank has won eight fights in a row and seven out of eight wins have come by knockout.

“When two fighters are in the ring, you know each other and I know Eubank better than anybody,” Saunders said. “He knows that I have the knack to beat him no matter how many times we meet," Saunders said.

“Mentally he knows that I have his number. I gave Eubank his chance to rematch three times, three times I signed a contract and sent it to him and three times he never sent it back."

Bjs must rate eubank if he thinks he beats groves. But bjs and eubanj have both improved so it'd be closevagain

[QUOTE=Vinnykin;18440448]Every boxer maintains the retire by (x) thing until they run out of money, the reason I believe it to be true with BJS is that he already owns everything he needs, and doesn't live a certain lifestyle, he could…

[QUOTE=Eff Pandas;18440379]LOL my bad brother. I thought that was a lil harsh, but I thought it was a lil funny too & was feeling like a had some leeway cuz that was a wacky stance with the retire in 2yrs…

[QUOTE=Vinnykin;18440289]No need to be insulting my man[/quote] LOL my bad brother. I thought that was a lil harsh, but I thought it was a lil funny too & was feeling like a had some leeway cuz that was a wacky…

[QUOTE=alexguiness;18440325]I agree 100%. Eubanks level of opposition dropped after BJS beat him. The reason being that Team Eubank knew Jnrs limitations against skilled boxers. The Saunders that beat Lemieux would have embarrassed Jnr and complee exposed him. Eubank is a…