The Big Ruiz: The Dude Abides (In His Fight With Joshua)

When the Hall-of-Fame matchmaker Bruce Trampler was making fights for heavyweight Andy Ruiz Jr. with Top Rank, there were times when he wondered if boxing was Ruiz’s first priority or if he was more interested in building homes with his father’s construction business.

“You almost had to say, ‘Hey, are you going to fight this year? What’s going on?’” Trampler told BoxingScene on Wednesday.

The disagreements led to several sit-downs with Top Rank officials to assess his interest in his career, including one memorable session with Top Rank Chairman Bob Arum, who pleaded with the undefeated prospect to shape up.

“Andy, what the f--- is your problem?” Trampler recalls Arum saying. “We’re putting a lot of time and effort to develop you, and you’re underrating your career!”

Face-to-face with the man who promoted 27 of Muhammad Ali’s fights and 35 of Floyd Mayweather Jr.’s, Ruiz didn’t flinch.

Ruiz told the red-faced Arum that he just happened to have other leisurely pursuits that took precedent over his boxing career at times, naming a couple activities that sounded more appropriate for a college fraternity president than a professional fighter.

“Arum pounded the table and said, ‘That’s great, so do I!’” Trampler said, laughing at the moment between two men who clearly enjoy enjoying themselves. “They were like blood brothers, but Arum was trying to (motivate him).”

Trampler, who worked with Ruiz for 28 of his bouts, described a fighter who needed to be put in a pressure-packed, do-or-die situation for him to reach his full potential, the typical lackadaisical student who required the pressure of a final exam to finally apply himself.

It’s why Trampler wasn’t shocked when Ruiz dropped Anthony Joshua five times on his way to stopping him in the seventh round to claim three heavyweight titles in June and why he won't be surprised if he does it again when they meet again on Saturday in Saudi Arabia on DAZN. 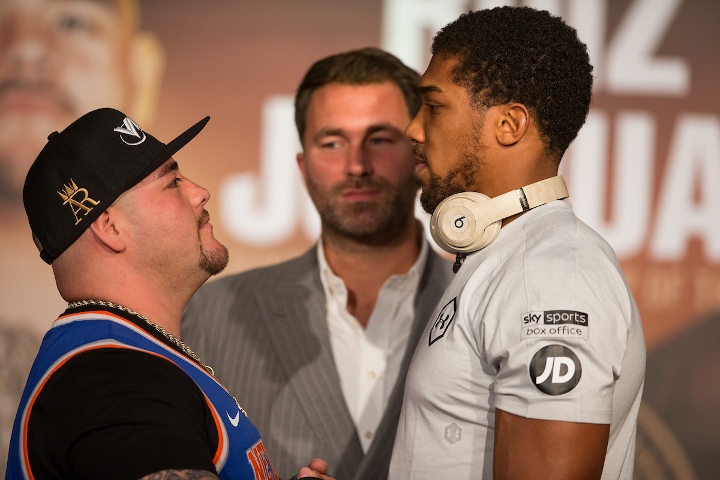 Because no moment is too big for the hefty, happy-go-lucky fighter from Imperial, CA, who was especially thick at 283.7 pounds during Friday’s weigh-in.

"To me, he always seemed fearless, nothing fazes him," said Trampler, who helped orchestrate the careers of dozens of champions, including Oscar De La Hoya, Miguel Cotto and Erik Morales. "Nothing bothers him and fighting in The Garden — it’s not like the moment was too much for him. He got dropped but he got up.”

Ruiz just wasn’t laser focused on his career before that opportunity, Trampler says, basically going through the motions.

“You’ve run into fighters who since they were kids they would say, ‘My dream is to win the heavyweight championship?’” he said. “Andy never said anything like that. Andy was easygoing, along for the ride.”

“It’s almost as if he fought as a second job,” Trampler said. “He would take long layoffs in his career, and as his promoter, we’d ask, ‘When do you want to fight again. What do you want to do?’”

He went on, almost in awe of Ruiz's ability to not worry about his career, “Everyone has concerns about their career, their life, but you just don’t see it with him. He’s always with a smile, always- not that he’s a simpleton or anything – far from it,” adding this zinger, “he was almost like a hippie in that boxing didn’t define who he was and he seemed content.”

Trampler described his first fight under Al Haymon against Alexander Dimitrenko this past April after he left Top Rank as non-descript, similar to his previous fights under Top Rank.

“He wasn’t very impressive in it,” he said. “It was just Andy being Andy and the fights he had before that with us with Kevin Johnson and any of the guys he fought – he went through the motions. He won the fights, showed the skill-set but never really showed the drive and ambition and determination — if he had never gotten the Joshua fight — he seemed content with that.”

It’s why Trampler says Top Rank didn’t sweat it too much when Ruiz left to sign with Haymon after his financial demands went unmet.

“The years we had him, there were no media guys clamoring for his next fight,” he says of the interest surrounding his career.

Still, Trampler spoke highly of his character, of how Ruiz didn’t make excuses when he lost a majority decision to Joseph Parker for the WBO title in 2016 amid cries of a controversial decision.

“To his credit, it shows you what kind of guy Andy is," Trampler said. "He said, ‘No, I didn’t get robbed, I could have done more. I should have done more but I didn’t.’ So he’s the kind of kid who isn’t looking for excuses.”

Trampler recalls first seeing Ruiz when he was training at Wild Card in Los Angeles before he signed with Top Rank.

“You could see the tools,” Trampler says. “Good balance, fast hands, boxing skills and you could see what the potential negatives were — he was cursed with an overweight body.”

Trampler said it took some convincing for Arum to sign Ruiz, given Ruiz’s rotund features. “The first time he saw him he said, ‘Jesus Christ, that fat guy?’ But even Bob, once he saw the kid in action he was impressed.”

And as his weight went up and down, Top Rank realized his size really didn’t affect the way he fought.

“He wasn’t the kind of guy who ran out of gas. Any negatives in his performance were not attributable to his weight. We realized, whatever he weighs he weighs.”

There’s a track record of big, overweight heavyweights having success, such as Buster Mathis and Buster Douglas, the matchmaker says.

“Clearly he doesn’t look (impressive) on the scale at the weigh-in, but once the bell rings the guy could fight and there’s no doubt about it.”

Trampler hasn’t spoken to Ruiz since he parted ways with Top Rank but he suspects not much has changed about his disposition.

“He’s not going to be bothered by a chiseled Anthony Joshua,” he said.

“Whatever happens,” the famed matchmaker said, “I guarantee on Sunday morning he’s going to be the same guy.”

The dude is going to whoop A.J as if Joshua peed on the dudes rug.

[QUOTE=Realboxingfan1;20235386]That’s not what Andy says about top rank and bob arum. Sounds like top rank trying to save face in a p.r way lol cause right after Andy left...[/QUOTE] Well they did get him a title shot against Joseph Parker…

[QUOTE=MDPopescu;20235090]... taking into account Trample's words (that Ruiz lacked in ambition and determination), I guess that all AJ has to do is to sneak himself into the fight -- get points, make it a bore -- but be careful not…

That’s not what Andy says about top rank and bob arum. Sounds like top rank trying to save face in a p.r way lol cause right after Andy left he became champ , top rank was doing nothing for him…