Best of 2020 Begins and Ends with Fury, Davis, Zepeda and Rosario

There are a couple things I’ve always promised myself.

But if I was ever lucky enough to score a hole in one, I’ve vowed to pluck the ball out of the cup, slide the club into the bag and head straight to my car – because it’ll never get any better.

I consider myself a decent bowler, but If I ever was lucky enough to string together 12 strikes, I’d unlace my shoes, put down my beer and never set foot in another alley.

Problem is, I’ve never followed that advice when it’s come to boxing.

Though I probably hit my high prediction watermark a decade ago when I said – on the eve of 2011 – that a then-unheralded and title-less Andre Ward would prove to be that year’s best fighter, it hasn’t stopped me from trying to replicate the success in each of nine tries since.

To no one’s surprise, I’ve never been nearly as prescient.

Which again leaves me with the December task of recapping the crystal-ball claims I made at this time last year, when I was sure I knew precisely what would happen in the dumpster fire that’s been 2020.

Ladies and gentlemen, I present Fitz’s Hits and Misses – Edition 10.

The longer we go, the less a win by Jermall Charlo over Gennady Golovkin will seem like an upset. But until they go ahead and sign a deal to get in a ring together, making an accurate advance forecast of such a surprise is a fool’s endeavor.

So, my award for 2020’s biggest upset will have to go to a fight that, you know… actually happened.

And there was no bigger surprise over the past 12 months than Jeison Rosario beating Julian Williams.

Not because Williams reminded anyone of the division’s all-time greats, more so because he was coming off a career-defining win, fighting at home and matched with a guy who, while dangerous and capable, provided no real reason to believe something memorable was about to happen. 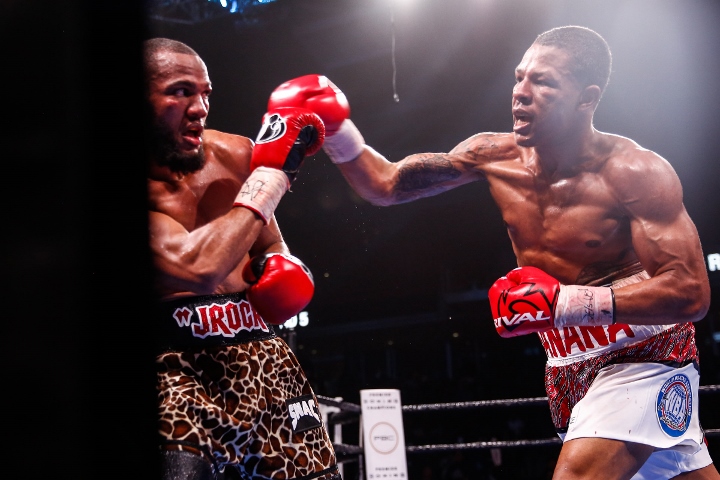 A second-round cut changed Williams’ body language and boosted Rosario’s cause, and the Dominican veteran made it pay off three rounds later with a left hook that turned the champ to mush.

A follow-up flurry drove him to the canvas. And though he rose, another torrent of blows left referee Benjy Esteves with no choice but to jump in and end matters at 1:37 of the fifth.

“When I lost my last fight I said I’d never lose again until I won the championship of the world,” Rosario said, “and that’s what happened tonight.”

He was a one-fight champion after losing the IBF/IBO/WBA hardware to Jermell Charlo in September, but for Jan. 18 at least, he was living the dream.

There’s something about an uppercut.

Oh sure, there’s plenty of titillation to be had when a fighter is laid out by a cross or a hook, but watching a guy get clipped with an uppercut leaves a mark that lingers years later.

Buster Douglas vs. Mike Tyson anyone? How about Anthony Joshua vs. Wlad Klitschko?

And trust me, I know there are others.

So when the perfect punch lands in the midst of a particularly compelling fight, it’s got all the necessary ingredients to be among the candidates for KO of the Year. As far as this space is concerned, no fight blended those elements better than Gervonta Davis vs. Leo Santa Cruz.

The dual-title setup was silly and it’s true that most people thought the younger and presumably stronger Davis would win the Halloween match, but the fact that it was a pretty good fight for five rounds made the sudden ending that much more memorable.

Santa Cruz was his typical brave and active self and seemed to be giving Davis a stern test, right up to the moment he threw a straight right hand that his foe eluded by leaning to the left.

Leaning to the left and unleashing a reply of his own in the form of a left uppercut that caught Santa Cruz flush on the jaw, immediately caving him to the floor and prompting referee Rafael Ramos to eschew a count in favor of summoning medical personnel.

“(Santa Cruz’s team) felt that if he’d gotten through these rounds that he was going to do well in the second half of the fight,” Al Bernstein said. “But it was not to be. The power of Davis, too much.”

If you forecast this as the year’s best fight last December, take a bow.

Though it was for a cheesy silver title and occurred in front of no fans in the pandemic-warranted bubble in Las Vegas, it’s a fair bet that folks will be remembering the 140-pound scrap between Jose Zepeda and Ivan Baranchyk for a long, long time to come.

Eight knockdowns in five rounds will do that for you.

Yes… that was eight knockdowns in five rounds. Actually, in 10 seconds short of five rounds.

Each man was dropped four times, and it finally ended when Zepeda – who’d never stopped a foe of Baranchyk’s quality – countered a jab with a looping right hook from his southpaw stance and followed with a straight left that landed on the left side of Baranchyk’s exposed jaw.

The Russian’s right leg bent underneath him as his body crumpled, and referee Kenny Bayless waved an immediate halt at 2:50 of the fifth.

“One of the best fights I've seen since Foreman-Lyle,” Bob Arum said. “Plain and simple.”

The decision on Fighter of the Year might have actually been the fight of the year.

It’s difficult enough to choose from a crop of high-achieving fighters in a normal year. But in a year where none of the highest-profile names fought more than once, and many superstars never even stepped between the ropes, it’s as much a hair-splitting exercise as it’s ever been.

If you’re looking for a fighter who changed his lot the most, you can argue for Teofimo Lopez, who became a superstar with a legit and compelling decision over pound-for-pound Vasyl Lomachenko.

But while Loma was a favorite going in, it wasn’t too hard to find folks who thought he’d lose.

On the other hand, you could select a fighter who not only won, but was particularly impressive.

And it’s for that reason that we’ll go with Tyson Fury as 2020’s top fighter.

Though it seems like 100 years and 1,000 excuses ago, the mammoth Brit entered a February rematch with the WBC heavyweight king amid questions.

He’d been only so-so since a draw with Deontay Wilder in 2018, and he arrived for the second go-round more than 16 pounds heavier than he’d been for the first.

Bigger, stronger and better, he claimed.  Fatter, lazier and less disciplined, others suggested.

Turns out they couldn’t have been more wrong.

Though matched with a devastating puncher who’d dropped him twice in the first fight, Fury was determined to be the aggressor from the start of the return bout and followed through on that promise against a foe who seemed totally at a loss for how to deal with it.

The challenger landed heavier shots, dropped his man in the third and the fifth and never seemed in a moment’s peril before Mark Breland saved his fighter by tossing in the towel at 1:37 of Round 7.

Wilder lost his belt and his aura, but it could have been far worse had it continued much longer.

Fury landed a match with Anthony Joshua that might get its winner in this space next December.

“I'm a destroyer. Not bad for someone with pillow fists,” Fury said. “I'm a man of my word. I told Wilder, his team, the world. We trained for a knockout. We wasn't tapping around in that gym. I talk like this because I can back it up.”

WBA “world” super featherweight title – Dallas, Texas
Rene Alvarado (“world” champion/No. 5 IWBR) vs. Roger Gutierrez (No. 3 WBA/No. 51 IWBR)
Why it’s garbage: Another week. Another weight. Another instance where one of the WBA’s three champs is defending a useless bauble. If it doesn’t say Gervonta Davis, it’s not a WBA title fight at 130.

[QUOTE=Shadoww702;20986541]Fair enough! I actually took Lemuix to beat Saunders... Figured no way! LeMule loses by decision in Canada. Talk about egg on my face.[/QUOTE] Well I would have bet my life that Saunders would win that fight. Looking ahead. Fury…

If Yarde hadn't planked in Russia, I'd still be bragging.

[QUOTE=Get em up;20985312]I picked Lopez to win though I didnt pick it by decision I figured it would be a knockout win in a decent fight. I couldn't have saw that 1 sided fight coming.[/QUOTE] Lopez-Loma was the upset of…

[QUOTE=vitali1999;20986192]No I don't. I thought Loma would win[/QUOTE] Fair enough! I actually took Lemuix to beat Saunders... Figured no way! LeMule loses by decision in Canada. Talk about egg on my face.