David Benavidez and Shawn Porter weren’t looking for style similarities to their upcoming bouts when they agreed to a recent sparring session, just the chance for two consummate gym rats to get in some extra work.

Much has been made of the pair of top-rated boxers connecting earlier this month in Southern California, given their drastic differences in size and weight. Both appear on the same Sept. 28 Fox Sports Pay-Per-View event live from Staples Center in Los Angeles, Calif., and figured there wasn’t any harm in getting in a few rounds with one another.

“Definitely if you're a great fighter you can find things to try to help yourself,” noted the 6’1½” Benavidez (21-0, 18KOs), who challenges 6’2” Anthony Dirrell (33-1-1, 24KOs) for his old 168-pound title in the evening’s chief support bout. “Obviously, I'm bigger than Shawn Porter and heavier than him. I wasn't trying to kill him but the thing about Shawn Porter that makes him so good is that he's a very good pressure fighter.

“So me, for what I was trying to do, I was trying to use a little bit more of my boxing skills, just to work on that in case I have to use that in the fight for Anthony Dirrell. So you kind of have to see in what areas you have to work on yourself.” 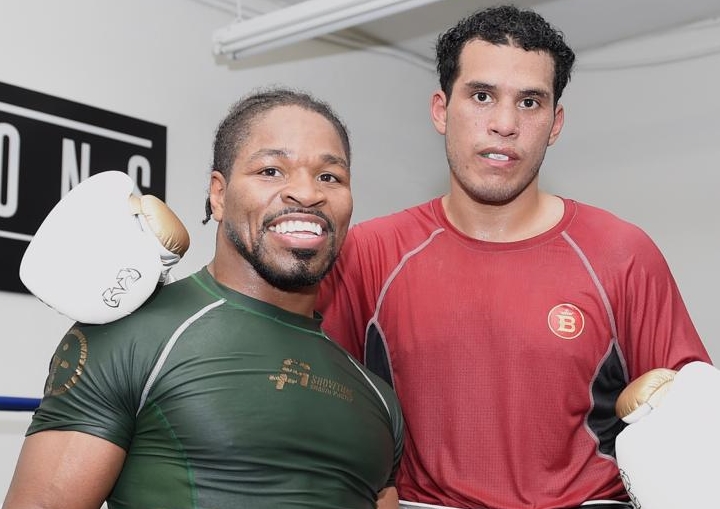 Similarly, Porter (30-2-1, 17KOs) knew getting into the ring with a taller orthodox slugger wouldn’t provide anything stylistically ahead of his welterweight title unification clash versus Texas’ Errol Spence (25-0, 21KOs), a 5’9 ½” southpaw. As he’s generally at a height disadvantage no matter whom he faces, the squat two-time titlist figured there wasn’t any harm in securing a much bigger training partner, if only for a day.

“That’s a big dude right there. That’s a fast dude, he’s competitive,” noted Porter, who attempts the second defense of his second title reign. “Honestly, I really enjoyed the experience of being in the ring with him and being in the gym with him as well, he’s a dynamite guy.

“Getting in the ring with him, at that point we wanted to challenge ourselves. We found out the conditioning I was in at that point was great. We knew that we still had a couple of steps to pick up.”

In the end, both gained precisely what they wanted out of their gym time together.

“I was boxing around a little bit. Trying to stop him with my jab, throwing a lot of jabs,” revealed Benavidez, who seeks to reclaim the belt he forfeited last September after testing positive for cocaine. “So, we both definitely walked away with something good from that sparring session.”

As much was noted by his one-time sparring partner.

“Being in the ring with a big guy like that, we were able to find out we were exactly where we wanted to be in camp at that point in time,” confirmed Porter.