Bellew: Usyk Must Make a Statement To Land Joshua Fight

TONY BELLEW warned Oleksandr Usyk he has to beat him in style if he wants to land a fight with Anthony Joshua.

But Usyk already has eyes on heavyweight star Joshua next year ahead of his first professional fight in the UK. 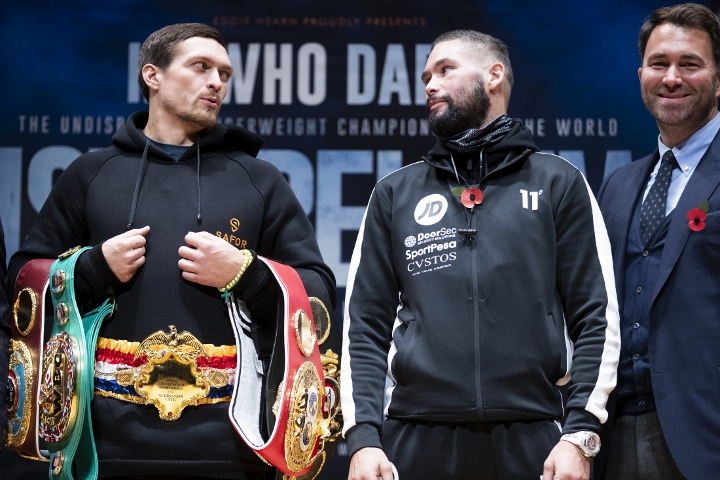 The unbeaten Ukrainian has come to the UK to face Bellew because he believes it will give him the platform to launch a bid for a fight with Joshua when he moves up in weight.

But Bellew told his foe he has to come to fight tonight if he wants to build excitement for a Joshua fight.

He said: “He cannot afford to come to England on Saturday and just run away with a boring points win.

“He has to come here and make a statement.

“He does not get to Anthony Joshua by coming here and scraping past me.

“He has to come here and make a statement, he has to beat Tony Bellew up.

“He has to look electric and by looking electric he has to get into the firefight and that is what I wish for.”

He is also a world, European and Olympic gold medallist from his amateur days.

But Bellew reckons he is now chasing the money and that is why he is in the UK.

He said: “The reason why he has taken this fight is because he wants to become a PPV star in the UK as that’s where the money is.

“He needs – not recognition – but popularity, even fame to a certain extent. He needs what I have. The reason he is doing it is that his accolades have not been enough for him.”

Bellew is a huge underdog for the fight despite once holding the WBC cruiserweight title.

But he is not short on confidence that he can upset the odds yet again.

He added: “He’s not unbeatable.

“I’ve maximised my potential ability to the highest I can go.

“We will find out how good I am.

“Since I came to the division and stopped destroying my body, I genuinely feel that nobody can beat me.

“On Saturday I will find out. I beat this fella and I’m an unbeatable monster.”

What if Bellew wins this fight! What would his critics say?

Its that easy to win a fight with GayJ? just beat-up Tony Bellend? Why didn't Luis Ortiz think of that?

[QUOTE=Mindgames;19260163]Quite a clever approach, Bellews psyche game is pretty underrated. "Your gonna need to be abit exciting here now son".. ��[/QUOTE] You're giving Tony way too much credit. The only thing of psychological interest here is that Bellew flat out…

Bellew he's better than ever, is a fact! Definitively a serious player with home and ref advantages... But at the end of the day, Usyk just too good for him. Usyk by late stoppage