Bellew: I Hope Chisora Lands His Big Right on Usyk, Gets The Job Done!

Former cruiserweight world champion Tony Bellew is hoping that his close friend, heavyweight Derek Chisora, will pull off a shocker when he faces Oleksandr Usyk on October 31 in the UK.

Bellew's career ended in 2018, when he was knocked out in dramatic fashion by Usyk, who at the time was the undisputed cruiserweight champion.

Following that fight, Usyk made a decision to move up to the heavyweight division. 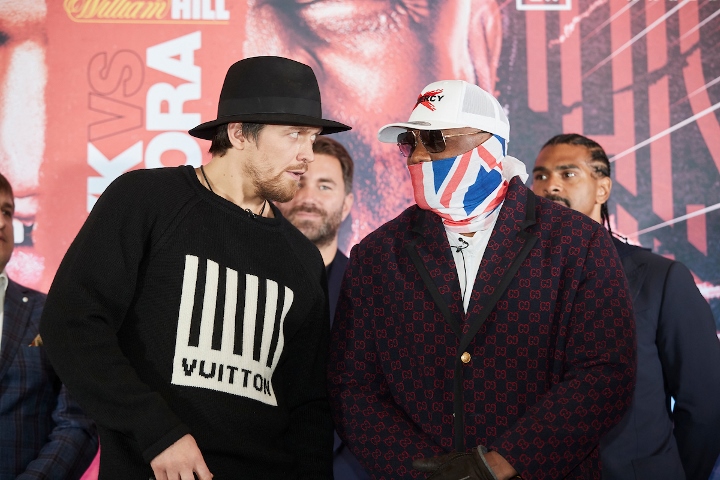 Usyk is coming back from a year of inactivity and it's only the second fight since defeating Bellew two years ago.

Chisora is likely in his last big fight opportunity - and a win over Usyk, who is currently the WBO's mandatory challenger, would bring him very close to a world title opportunity.

Bellew is backing his buddy in whatever way he can.

"He's my friend, he's like a member of my family. I'm backing him, I'm there for him whatever he needs, whatever he wants, I will be there. But believe you me, there is nothing I can do for him on October 31. He's going to have to do it all himself. Believe you me, he has it all to do," Bellew told Sky Sports.

"[Usyk] is the most avoided fighter probably in the world. An amazing fighter. If anyone can do it, when their back is against the wall and they are written off by everyone, then Chisora can. I'm hoping his big right hand lands, and he gets the job done. But this is a hard one. It will be very tough.

"I still think [Usyk is] a little bit open and can be caught. Watching his amateur fights, there was always a reaction from him when he got caught clean, but no one has exploited that so far in the pros. His chin is up in the air sometimes and if that continues then it might get caught one time."

[QUOTE=Rick Taylor;20816898]most boxers just want easy paydays and are just scared. usyk is scared of fury and wilder[/QUOTE] Surely, you have evidence to back this up, right? Who else is he scared off? Please tell me - Tony Bellew.

[QUOTE=alexjust;20816765]Coward. Sure, what boxer isn't? What undisputed champ isn't? Cowardice and this sport go hand in hand together as peanut butter and jelly. Something you clearly cover your face with when you go out. Jesus, man, you need help. That…

[QUOTE=Rick Taylor;20816268]his english isnt near as bad as you claim. [B]i have heard him commenting on wilder and fury in the past. [/B]the ukranian is a coward[/QUOTE] Coward. Sure, what boxer isn't? What undisputed champ isn't? Cowardice and this sport…

I’ll believe this fight happens when they are in the ring on fight night.

[QUOTE=Earl-Hickey;20813988]This kind of post makes me cringe. "zero chance"? It's unlikely because Chisora is slow but if he lands a big one Usyk may well go, this is heavyweight boxing, outside of Vitali Klitschko I can't think of a heavyweight…