Bellew: Boxing Will Not Retire Me; I'll Retire After Usyk Fight

Tony Bellew was enjoying semi-retirement, yet admittedly still “a lunatic” that loves to fight.

Then his phone rang one day this summer while he was driving. His new wife, Rachael, was sitting in the car with him when his promoter, Eddie Hearn, called that afternoon.

As soon as his mild-mannered wife started to hear Hearn tell her husband that he could make a fight for him against Oleksandr Usyk, she emphatically mouthed what she thought of Hearn’s plan. Bellew could read her lips, but she didn’t say it loud enough for Hearn to hear.

“Although I shouldn’t say it,” a laughing Bellew recalled, “she looks at me and she says, ‘Tell him to f*ck off.’ That’s what she says.”

Rachael Bellew knew she was fighting a losing battle. On their honeymoon earlier in the summer, her husband was watching Usyk school previously unbeaten Murat Gassiev on his phone.

Once Usyk called out Bellew following his unanimous-decision win over Gassiev, Rachael Bellew realized her husband would return to the ring. Bellew had promised her he’d retire following his second technical-knockout of David Haye in their rematch May 5 in London, but the former WBC world cruiserweight champion hasn’t gotten boxing out of his system.

“Everyone asks why,” Bellew said. “I was on me honeymoon and for one reason or another I was stood there, watching Oleksandr beat up Murat Gassiev, on a mobile phone. And the fight stops, the wife gives me this look, as if to say, ‘We are supposed to be enjoying our night out on our honeymoon. Why are you watching that phone?’ And then he makes the ultimate sin – he says my name and it didn’t take long. As soon as he said my name, I knew [we’d fight].”

Bellew swears he also knows that his fight versus Usyk on Saturday night will be the last time he enters the ring as an active boxer.

There obviously would be monetary temptation to defend four cruiserweight titles if this big underdog pulls off an upset against the unbeaten Ukrainian southpaw at Manchester Arena (Sky Sports Box Office; DAZN). Bellew also could move back up to heavyweight for a bigger fight if he figures out a way to overcome an opponent typically listed as at least a 7-1 favorite. 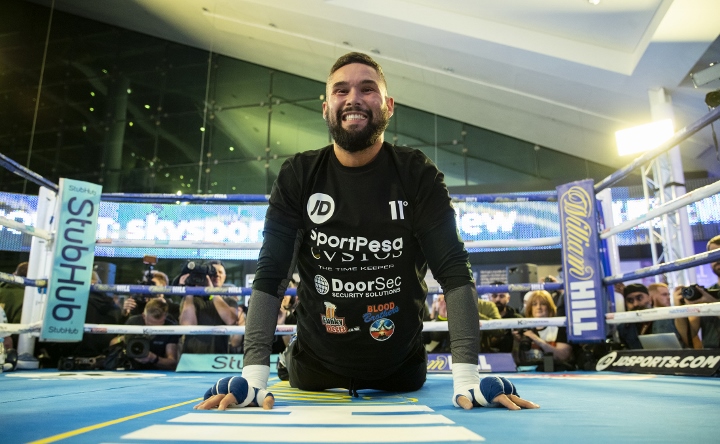 The Liverpool native is convinced, though, that he won’t box again if he produces what would be the most noteworthy win of his 11-year pro career.

If he were to upset Usyk and try to talk Rachael into allowing another fight, Bellew believes it’d lead to a divorce. Bellew (30-2-1, 20 KOs), who’ll turn 36 on November 30, has repeatedly promised his wife that this fight for Usyk’s IBF, WBA, WBC and WBO cruiserweight crowns will mark the last time he boxes.

“Trust me, brother, that’s a fight I cannot win at home,” Bellew said. “I can’t beat her. She’s the most important thing to me in this world, alongside me kids. So I made the promise this time. That’s the only reason she agreed to it. So on Saturday night, I’ve always said this and I’ll reiterate it, I’ll say it again – boxing will not retire Tony Bellew. I will retire from boxing.

An old boxing axiom states that if a fighter is talking about retirement, mentally, he has already retired. Bellew disagrees and assures skeptics that he still has the fire inside him to do whatever’s necessary to defeat Usyk.

“That’s the man that’s gonna leave professional boxing – a horrible person, a vicious, nasty [man]. You’ll just see by the appearance. Trust me, when I turn up Saturday, you will not see the nice man you’ve just seen on that stage. I will just change. You’ll just see.”

Usyk isn’t considered as hard a puncher as Haye (28-4, 26 KOs), who was expected to batter Bellew during Bellew’s heavyweight debut in March 2017.

Bellew beat Haye by TKO in the 11th round of their first fight, in which Haye suffered a debilitating Achilles injury during the sixth round.

Bellew also stopped Haye in the fifth round of their rematch to extend his winning streak to 10. He hasn’t lost since WBC light heavyweight champ Adonis Stevenson (29-1-1, 24 KOs) stopped Bellew in the sixth round of their November 2013 bout.

“It’s funny because before the first David Haye fight, everybody said to me, we fear for Tony Bellew’s health,” Bellew said. “So I must be getting better, because this time they’re only telling me I’m gonna get a lesson. So at least actually me health isn’t gonna be affected.

[QUOTE=DuckAdonis;19260116]Or maybe Usyk will retire you[/QUOTE] Damn And Usyk did just that

A lot of respect for Bellew, he doesn't have to retire after this fight

Got em. Reality slaps bellew in the face again.

Well, looks like boxing DID retire you anyway. Got to, kygo, again, lol!

[QUOTE=buddyguns;19258622]Bellew can't retire from boxing quick enough. He's the definition of a domestic level fighter with a manufactured title.[/QUOTE] I like Bellew, he's fun and good for the sport. As for level, I'm not sure what domestic level means as…