NEW YORK – Sullivan Barrera knows as well as anyone that Vyacheslav Shabranskyy can punch.

Barrera doesn’t think the Ukrainian light heavyweight contender is as big a puncher as Joe Smith Jr. – who, like Shabranskyy, dropped Barrera before Barrera came back to beat him. Still, Shabranskyy (19-1, 16 KOs) is powerful enough, according to Barrera, to hurt Sergey Kovalev (30-2-1, 26 KOs) when they square off Saturday night for the vacant WBO 175-pound championship in The Theater at Madison Square Garden.

The 34-year-old Kovalev is a 14-1 favorite to beat Shabranskyy, but Barrera wouldn’t be surprised if Shabranskyy pulled off an upset in a 12-round bout HBO will televise as the main event of a “World Championship Boxing” tripleheader (10 p.m. ET). 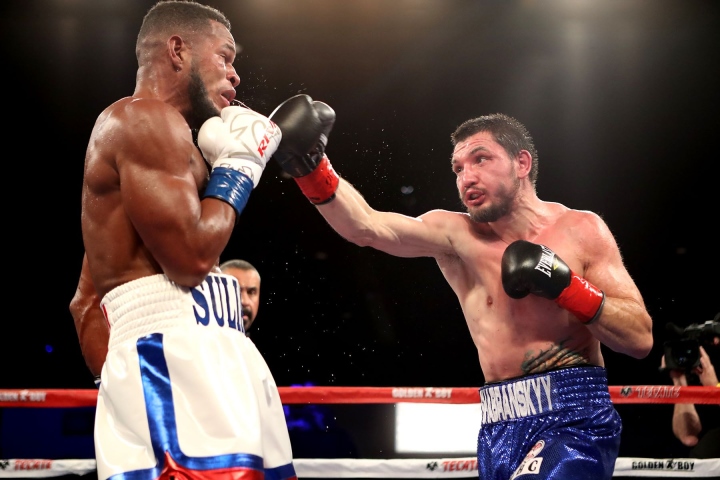 “Shabranskyy is a guy that hits hard,” Barrera told BoxingScene.com through a translator before a press conference Wednesday in Manhattan. “If Shabranskyy is able to fight on the inside, he can definitely win the fight.”

Like many others, Barrera has noticed that if an opponent shortens the distance against the hard-hitting Kovalev and goes after his body, that opponent can be successful against the former champion. The Cuban contender, who turned down an offer to face Kovalev on Saturday night, also was disappointed in the way Kovalev reacted late in his eighth-round technical knockout defeat to Andre Ward in their rematch June 17 at Mandalay Bay Events Center in Las Vegas.

“He definitely gave up,” said Barrera, who got up from a second-round knockdown to knock out Shabranskyy in the seventh round 11 months ago in Indio, California. “For a guy at that time that was a champion – some of those Ward punches were questionable and some were low. But he shouldn’t have given up the way he gave up. He definitely gave up.”

[QUOTE=Shadoww702;18237129]I thought ALL Russians are alcoholics??? J/K Me and Kovalov :alcoholic before the fight[/QUOTE] ... yes, they seem to have something in their genes which is related to alcohol...

[QUOTE=MDPopescu;18237117]... at this level he may be "back"... but believe me: once a Russian becomes alcoholic he will never come back...[/QUOTE] I thought ALL Russians are alcoholics??? J/K Me and Kovalov :alcoholic before the fight

[QUOTE=Southpawology;18237020]Never seen shabranskyy fight[/QUOTE] Put it this way Sullivan Barrera knocked him out and Barrera isn't known for his punching power.

[QUOTE=MDPopescu;18237095]... normally (in case he didn't become the shadow of his own shadow), Kovalev should stop Shabranskyy within 4 rounds...[/QUOTE] That sounds about right. This is a total mismatch. Only reason I'm even remotely interested in it is seeing if…