Not simply in a career-advancement sort of way, though.

But when his 36 (or fewer) minutes of labor are done at Brooklyn’s Barclays Center, clearing out an extra display shelf won’t be the only thing on his mind.

“I’ve been on this meal plan for six months now, almost, so I’m craving some carbs,” said Jack, who’s enlisted the help of fitness guru Mackie Shilstone to make sure Friday’s weigh-in is drama free. “I’m a professional athlete, so I’m supposed to do that. But when you do it for a long time you want all the fast food and all the good stuff. After the fight I’m going to eat good.”

And what better place than New York to bust out of a dietary shell?

“Absolutely,” he said. “Every day for a month.”

First things first, Jack, the WBC champion at 168, and DeGale, who holds the IBF belt in the division, will headline a busy Saturday fight night on Showtime’s cable properties.

The network begins with a 7 p.m. card on its Extreme channel that will include welterweights Thomas Dulorme and Brian Jones, middleweights Ievgen Khytrov and Immanuwel Aleem, and a women’s junior featherweight title bout between Amanda Serrano and Yazmin Rivas.

The 9:30 p.m. show on Showtime includes a 130-pound title match between IBF champ Jose Pedraza and Gervonta Davis before the super middleweight bout that’ll unify the IBF and WBC titles, result in the awarding of the Ring Magazine belt and allow someone to stake a claim to succeed Andre Ward.

Jack, though, insists he’s unmoved by the pomp.

“For me it’s just another fight,” he said. “He’s in the way. He’s standing in the way of my success, so I’ve just got to stay focused on him. I don’t really think about it as all the titles or everything else on the line. I’m just staying focused on trying to win the fight and trying to beat him. That’s it. All the other stuff or money or belts and stuff, that’s just bonus.”

Jack sat down Sunday to discuss the significance of the DeGale fight, his reaction to opponents who’ve downplayed his abilities going into past fights and his plans at super middleweight and beyond. 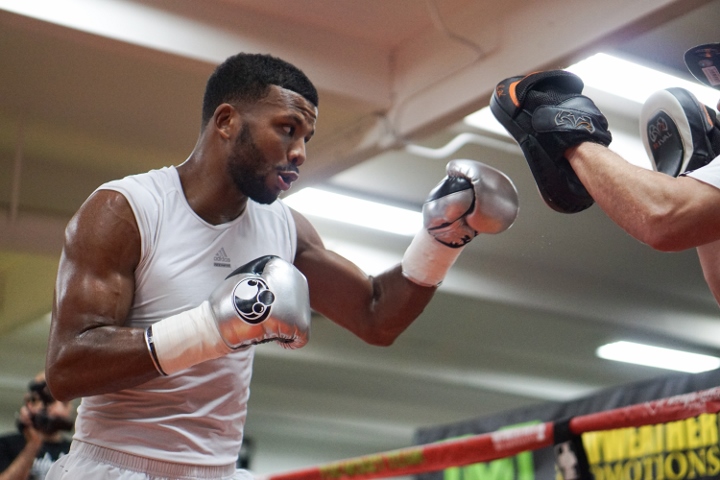 What are the final few days like before the fight? Are you anxious or nervous? Do you wish it was tomorrow?

I’m definitely not nervous. I’m excited. All the hard work is done. Now we’re just cruising. Staying active and keeping the weight down. That’s it.

Do you think about the fight constantly, or are you trying to occupy your mind in other ways?

Your last couple fights have been gradual steps up in level. How does this one compare? Do you consider this one the biggest you’ve had so far?

When you look at him – one fighter to another – what jumps out? What do you notice right away that you know you’ll have to pay attention to?

That’s hard to say. It’s not like ‘Oh, he’s so good at this and that.’ Not really, but obviously he’s done something right to become Olympic gold medalist and become a professional world champion. Obviously he’s doing something right. I know he’s very talented. Good movement. He moves well. He’s a very athletic guy, but we’ve got a game plan and I’m not worried about him.

Do you spend a lot of time watching and studying tape of an upcoming opponent, or are you more of a guy who wants to figure out someone’s style once you’re in a ring with him?

You can’t watch too much tape because there always different when they’re in front of you. Styles make fights. It might look easy on the outside. My last few opponents were like, ‘Aww, he stinks,’ and they thought they could beat me and they say I’m kind of basic. But then after the fight they’re like, ‘Hey, he’s underrated.’ I don’t pay too much attention. I’ll watch him a little bit. I haven’t watched a full fight with him. After a couple rounds I get bored.

Lots of guys will say they don’t want to watch guys in advance, because then they’ll be looking for certain things during the fight and if the opponent changes things up it could be a problem. Is that one of the reasons you don’t do it, or would you not do it anyway?

Does the fact the opponents have underestimated you motivate you? Does it make you angry that people might not have the respect for you that you think you deserve?

I want people to think that. It’s a good thing. They’re overlooking me and stuff, but soon people will find out. Even this fight, James DeGale is giving me credit. He’s showing me more respect than he usually gives his opponents. People are starting to learn.

It’s got to be flattering that opponents come out of fights with new respect for you, right?

The 168-pound class was Andre Ward’s domain for a long time. Now it’s you and DeGale that are primarily claiming to be the next guy. How important is not only winning the fight, but winning it decisively, to back up your claim to be the best super middleweight?

Right now, I don’t think about everybody. Right now it’s just James DeGale. We’ve already proved that me and him are the two best guys and now we’re going to see who’s the No. 1. After that, there’s really nobody that’s a big name or a big money fight or somebody that’s a top guy after that. So I think it’s time to move up to the next weight class. That’s where all the big names and the big money fights are. Absolutely.

Yes, it’s hard for me to make. For this fight, I’m working with Mackie Shilstone with nutrition. So this fight I’m going to make the weight, but normally I’m a pretty big guy. At 175, I want to go straight into a title fight, of course. I’ve got a tough fight ahead of me and it’s one fight at a time, but after that we go to 175. The future is definitely at 175.

How did you start working with Mackie and how has it been?

I went down to New Orleans to do some tests, since my weight was pretty high. He helped me with nutrition and a meal plan and supplements and stuff. I’ve been working with Larry Wade, he’s my strength and conditioning coach, he’s done a hell of a job. He’s also strength and conditioning coach for Shawn Porter. Mackie’s meal plan and nutrition have helped me a lot.

What are you normally walking around at between fights?

So when fight night comes and we see the first couple rounds, what will be happening right away that indicates it’s a good night for you?

It’s hard to say. Anything can happen in the ring, so we’ll have to wait and see and adjust to the situation that’s in front of me. But everybody knows that I like to go to the body, so I’m definitely go to the body. But the plan is just to win the fight, no matter whether we’ve got to box on the outside or on the inside, if we’ve got to move, if we’ve got to pressure him. We’ve prepared for anything.

Fitzbitz says: There are plenty of smart people who believe Lara is the best fighter in the world at 154 pounds, and a match with Foreman isn’t likely to give reason to change minds. Lara by decision

Fitzbitz says: I want to like Jack, and he’s admittedly already won fights that I wasn’t sure he was going to. But I can’t help thinking DeGale is simply too good for him in this one. DeGale by decision

Fitzbitz says: Experience – not to mention the independent rankings – suggest Pedraza wins in a walk. Still, I’m thinking Davis is the kind of kid who’s ready, even if his resume isn’t. Hunch. Davis in 6