Badou Jack: I'm a Fighter, So I Ain't Gonna Quit

No matter how much blood streamed from his gruesome cut, at no point did the thought of quitting enter Badou Jack’s mind.

The former two-division titlist officially lost his light heavyweight title eliminator versus unbeaten Marcus Browne last Saturday at the MGM Grand in Las Vegas. Yet, in fighting through one of the worst cuts ever suffered in a prizefight, he left the ring as the evening’s hero in the eyes of most viewers.

“That cut was the worst I’ve experienced in 40 years in the sport,” noted Leonard Ellerbe, head of Mayweather Promotions during a media conference call to discuss Jack’s performance as well as the aftermath. “That cut was unbelievable. You got to kill this guy. He was just wiping the blood away, continued to move forward and refused to give up.

“That type of fighting spirit indicates that you can overcome anything in life. More importantly, it proves that Badou Jack will never give up.” 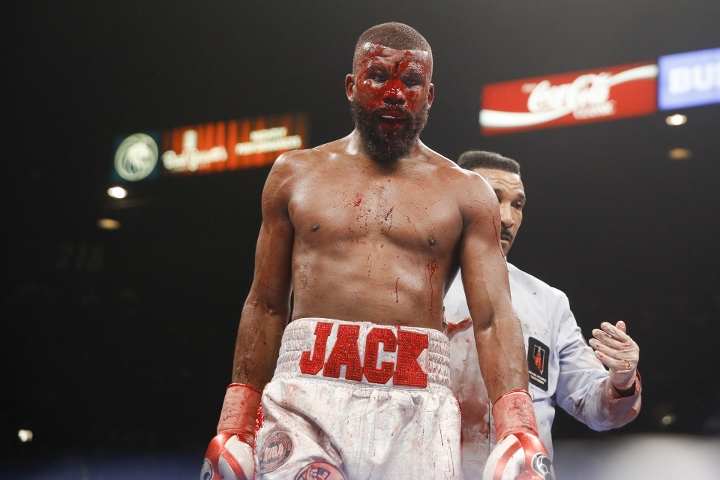 Jack (22-2-3, 13KOs) managed to fall behind early in Saturday’s clash with Browne, which served as the chief support to a Showtime Pay-Per-View topped by Manny Pacquiao’s 12-round win over Adrien Broner. Losing early rounds is nothing new for the 35-year old Las Vegas-based boxer, who tends to come on strong late in fights, which in turn has produced several close decisions in his last several fights.

Any hope of a comeback versus the younger and more effective Browne (23-0, 16KOs) was all but out of the question after a clash of heads left Jack with a cut which ran roughly 6” across his forehead. Naturally, the wound prompted several hard looks from the ringside physician, with Jack’s only fear that the fight would be stopped against his will.

“I’m a fighter, so I ain’t gonna quit,” Jack repeatedly insisted during Tuesday’s conference call. “I’m not gonna tell them to stop the fight. They took me to the doctor a couple of times, but I wasn’t going to stop it. It was bleeding, but I’m going to keep fighting until the end. I’m a fighter.

“At first, I was thinking, damn it just keeps leaking. I thought the doctor would stop it, but they didn’t.”

It did, however, kill any momentum Jack and his handlers believe he was gaining in the second half. Browne dominated the early rounds but was deducted a point in round seven for excessive holding. It was the closest he came to losing even one round on the scorecard of Don Trella (119-108), who had the New Yorker otherwise pitching a shutout.

Scores of 116-111 and 117-110 additionally indicated the insurmountable deficit Jack was forced to overcome, which left many in wonderment why he persisted on fighting the entire 12 rounds.

The answer can be found in the inspiration Jack draws outside the ring.

The Badou Jack Foundation was started by the boxer and his business partner Amer Abdallah, which officially launched last May. Its primary focus is on aiding refugee children in war torn nations such as Syria and Jordan.

Jack’s role in that cause has opened his eyes to far bigger problems than he will ever face in the ring—including the challenge of overcoming the 28-year old Browne.

“I knew he was going to be tough, but has never stood in deep waters with tough fighters before,” Jack said of his recent in-ring conqueror. “With the cut in the middle of the fight it’s tough to say (whether a comeback was possible).

“I don’t fight for myself, I fight for the refugees. That’s the stuff that goes through my mind. They see bombs, they go through war. So what’s a little scratch on my forehead.”

The “little” scratch on his forehead was estimated at 6” in length and resulting in the boxer losing 1-2 liters of blood according to attending post-fight physicians. A good portion of it managed to stain the shirt of referee Tony Weeks, who was drenched in blood just through his role of separating the two fighters.

“I saw the pictures of Tony Weeks, it looked like he was delivering a baby,” Jack joked. “But I’m fighting for a bigger cause. All of these refugees and what they’re going through—this is nothing to me. You gotta keep fighting.”

Jack’s fight out of the ring begins as soon as Wednesday, when he plans to travel to the Middle East to visit those trapped in refugee camps.

“Badou is hopping on a plane to Dubai tomorrow,” Abdallah informed the media. “He’s heading to the Middle East.. for his mission.

“That was the first thing he asked (during surgery), can he still hop on a plane? That’s the type of warrior he is.”

It’s what kept him fighting on a night when he could have easily mailed it in. Instead, he made the most of a very bad situation, knowing others have it far worse.

“I feel like the cut messed everything up,” Jack admits, though accepting the night for what it was. “But God’s will. Everything happens for a reason.

“You just have to stay positive and keep moving forward like I did in the ring.”

that boy got heart for sure

Jack's a good fighter and from what I've heard a good man, but there's nothing special about him talent wise. He's just good. It's sad because he should've beaten Chunky Degale, that was his chance to be something.

I kept saying through the fight, "He's a fighter. He's a fighter." His corner, the ref, the doctor. Someone should have stopped it.

His corner should have stopped the fight to protect him long term. He will be compromised now. It isn't up to him to quit. The fighter will keep fighting on unless its a Victor Ortiz Rigo de la Hoya type…