Former amateur star Balazs Bacskai remained unbeaten after outpointing Italian Alex Marongiu last Friday in Szekesfehervar, Hungary. Bacskai (4-0, 1 KO) controlled the distance with his precise movements and picked up a shutout win after eight rounds by all three judges. Marongiu (6-8) was game and always tried to put pressure on Bacskai but the Hungarian fighter blocked most of his foe’s wide shots.

Former European champ and 2012 London Olympian Bacskai turned pro this past June with a ten-round decision victory in a grudge match against former pal Norbert Harcsa (8-1, 1 KO). With the impressive win, the 29-year-old pugilist also grabbed the Hungarian Title at middleweight, thus becoming the first ever Hungarian to win a national belt in his pro debut.

Bacskai collected a total of four wins in 2017, finishing the year with an unblemished record. While he is satisfied with his first year in the paid ranks, the Budapest-native is now looking forward to an even brighter 2018. 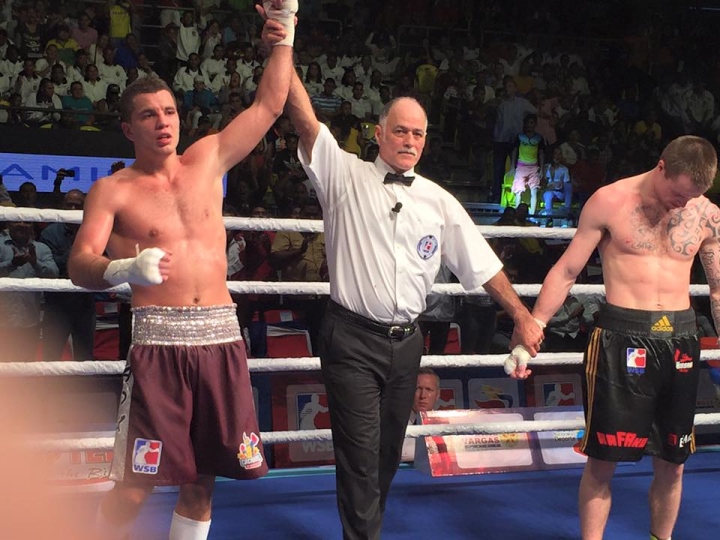 Balazs Torteli had an unsuccessful try to win a second national title in just as many weight divisions when he came up short in an entertaining ten-round scrap against Zoltan Szabo. Torteli (14-2, 5 KOs) abandoned his welterweight throne when he dropped down to 140 pounds earlier this year in order to be able to gain an advantage in physical strength over his future opponents.

Szabo (19-9, 8 KOs), however, used his footwork effectively to avoid getting clipped by his more powerful counterpart while he had built an early lead thanks to his fast jabs and straight rights. Torteli found some success with his hooks in round three and four but Szabo used the experience he collected on international soil very well and outworked his 25-year-old foe in most of the rounds down the stretch.

After ten frames judges scored it 99-91, 96-94, 95-95 for Szabo who broke out in tears of joy after the announcement.
Super welterweight Ferenc Berki Jr won a hard-fought eight-round decision over Jemal Shalambaridze. The Budapest-native Berki (10-0, 5 KOs) had a tough time with the former junior European silver medalist Shalambaridze (7-2, 4 KOs) with the Georgian fighter being ultra-aggressive and refusing to slow down during the contest. The fight was much closer and more competitive than what the official scores showed, namely, 78-73, 79-72, 79-72 for the Hungarian boxer.

Reigning Hungarian champ Jozsef Darmos (8-1-2, 7 KOs) struggled his way to a six-round draw against Italian Yassine Habachi (5-10-2-1, 3 KOs) in a cruiserweight war. Darmos showed one more time why he is the Hungarian drama-king when he got rocked multiple times during the contest but managed to dish-out massive punishment on the very same frames that kept the fight at a high entertaining level. Habachi proved early on he can take the shots of his former amateur European medalist foe and brought the fight to Darmos during the entire bout.

140-pounder Balazs Marton is now in a four-fight knockout streak with a third-round TKO win over Nicolae Dragos, Zoltan Kispal returned to the winning column with a fellow TKO3 victory over Krisztian Duka.

The event, that was promoted by Felix Racz’s Felix Promotion, was staged at the Lake Side Hotel in Szekesfehervar, Hungary and got televised live by M4 Sports in the country.

You can reach Tamas Pradarics at [email protected] and follow him on https://twitter.com/TomiPradarics.