Austin Williams Batters Esau Herrera, Stops Him In Fifth Round

Their fight lasted longer than Austin Williams expected, but he eventually took out Esau Herrera on Friday night.

The strong southpaw stopped Herrera in the fifth round of their scheduled six-round middleweight match at TV Azteca Studios in Mexico City. Houston’s Williams (6-0, 5 KOs) battered Herrera to the body and hurt him to the head with a left hand in the fifth round.

A beaten Herrera was still on his feet when their bout ended at 1:36 of the fifth round on the Juan Francisco Estrada-Carlos Cuadras undercard. 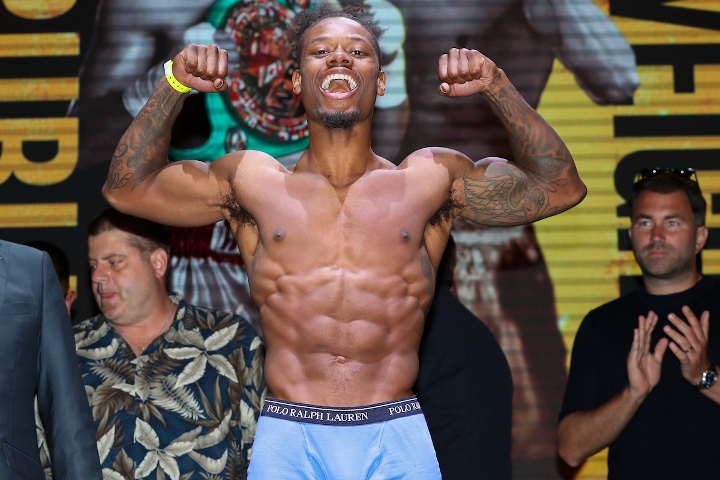 Herrera landed two right hands as Williams backed up early in the fifth round. Williams responded with a short, left uppercut that made Herrera bend over and hold him.

Williams, sensing Herrera was ready to go, then snapped back Herrera’s head with a straight left hand. The referee immediately stepped between them after Williams landed that shot and stopped their fight.

Williams attacked Herrera’s body throughout the fourth round, but Herrera managed to take those shots. He connected with a few hard head shots in the fourth round as well, yet he seemed to tire in that round.

Herrera snuck in a left hook of his own toward the end of the third round.

Herrera complained about what he perceived as low blows toward the end of the second round. Earlier in the second round, he turned away from Williams after Williams landed what looked like a legal left around Herrera’s belt line.

Williams drilled Herrera with a straight left only 15 seconds into their fight. A hard left to the body by Williams made Herrera take a deep breath about 50 seconds into the opening round.