New York - WBC/WBO world champion Terence Crawford (31-2, 22 KO’s) did what he normally does on Saturday night; take a formidable opponent and make him look like he doesn’t belong in the same ring. Felix Diaz (19-2, 9 KO’s) is an Olympic gold medalist and a very credible junior welterweight who many felt had defeated Lamont Peterson in a controversial decision loss.

But against Crawford, Diaz might have not won a single round. Crawford even fought Diaz south paw the whole fight. This was something his promoter, Bob Arum of Top Rank, Inc. has expected ever since his first showing on HBO.

“Ever since his first fight on HBO, I thought he was going to be the best of the best,” Arum told reporters ringside after the fight this Saturday. “I thought tonight, he fought a really tough guy and he handled with him with ease. He just gets better and better.” 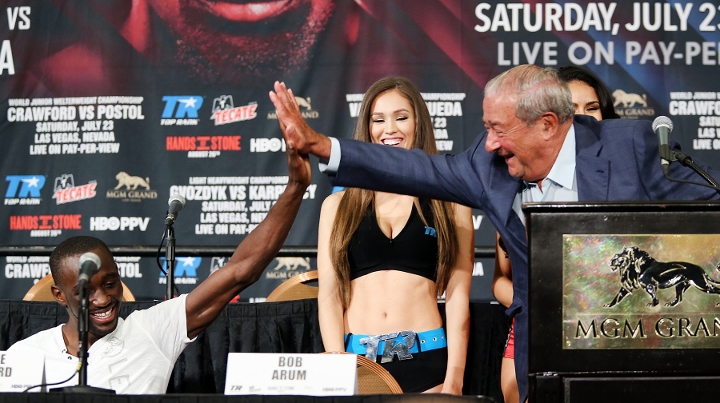 The plan is to make a fight with Julius Indongo (22-0, 9 KO’s) for all of the 140 pound-titles this summer and then likely go after a mega fight after.

“We want to unify with (Julius) Indongo and get all four belts, once we get all the belts this summer, he’s going to fight Pacquiao and we’re going to set it up with my new partner Warren Buffet,” joked Arum.

In the history of boxing there is somewhat of a changing of the guard or passing of the torch when a once famed superstar fights an up and coming fighter. In victory, the up and coming star makes his name off that fight.

Arum sees a fight between Manny Pacquiao (59-6-2, 38 KO’s) and Terence Crawford differently, not as a changing of the guard but a competitive fight that people will pay to see.

“No changing of the guard, it’s a fight that people want to see and pay for or a fight, they won’t pay for,” Arum explained about a potential fight between Pacquiao and Crawford.

“The changing of the guard is bullsh*t fake news like you guys say. It’s fake news. If people want to see the fight and it economically will do justice to both guys. I think it would be a terrific fight and I’d make the fight.”

[QUOTE=619 southpaw;17698604]True. I just think it's going to be a little tougher then some might think. Pac will be extremely dangerous early if Crawford gets through the early rounds I think he has a good chance to look really good…

That's the for sure next move, but good luck with the 2nd move. Idk about Manny being down for that for the money up for grabs for that fight. Arum probably trying to put it on in Omaha too just…

Pshhht fck all these Pac haters in this thread. Crawford needs to come get this work :boxing:

Manny will price himself out and continue his bum tour overseas cause nobody in the states wants to watch his backyard bum fights.