WBO super featherweight world champion Vasyl Lomachenko was described as "superhuman" by his promoter, Bob Arum of Top Rank, after his dominant win over previously undefeated Guillermo Rigondeaux, but the Ukrainian insisted it was not a big success for him.

Lomachenko prevailed in New York on Saturday night after Cuban Rigondeaux retired in the sixth round with a hand injury, suffering his first defeat as a professional having been on a wrong end of a one-sided contest.

The victory marked Lomachenko's ninth straight win and the fourth successive bout in which he has forced his opponent to retire. 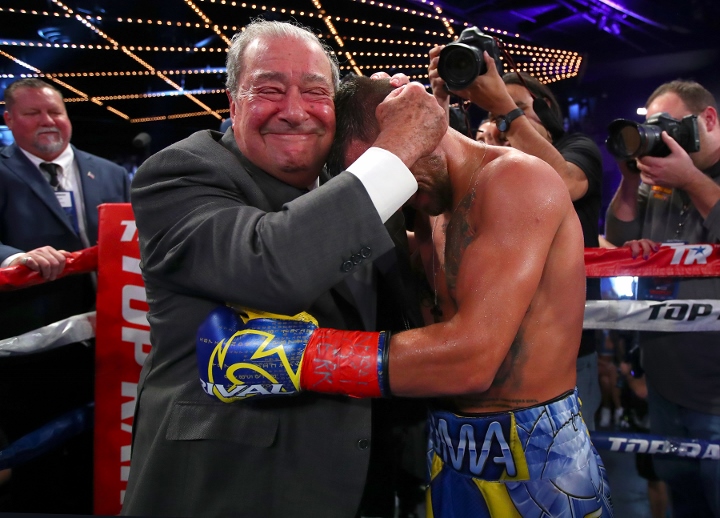 And Arum said of Lomachenko: "This guy is superhuman. Rigondeaux is not a ham-and-egger. Nobody came close to beating him. But with Lomachenko, he had nothing. He was totally bewildered.

"He goes to the ground [to cover] and Lomachenko is there waiting [to hit him] on the other side."

Rigondeaux was unbeaten in 17 fights at super bantamweight level, but the move up, by two full weight divisions, to super featherweight proved a step too far as Lomachenko once again proved his pedigree in the first world title fight to feature a pair of two-time Olympic gold medallists.

Lomachenko did not get too ahead of himself in the aftermath, acknowledging that Rigondeaux - who dominates at 122-pounds and holds the WBA belt - was simply too small for 130 weight class.

But Lomachenko - who afterwards suggested he should change his name to "No-mas-chenko" played down his triumph, saying: "He's [Rigondeaux] a tough fighter, a king in boxing, but a king in his weight class. It's not a big win for me because of that."

Up next, Lomachenko may head up to the lightweight limit of 135 pounds to pursue his third division title after capturing gold at 126 and 130.

[QUOTE=MrShakeAndBake;18328236]Show us proof of such allegations ...... tik tak .....[/QUOTE] I was being sarcastic. Loma doesn't use peds otherwise he would be Knocking opponents.