Or so said Bob Arum, Fury’s co-promoter. Arum claims the brash Brit took Wallin very seriously from the time their 12-round heavyweight fight was made last month.

Fury was a 25-1 favorite versus Wallin, who was unbeaten but unproven before he gave Fury everything he could handle at T-Mobile Arena. Ben Davison, Fury’s trainer, and Fury himself emphasized throughout the buildup toward their bout that they realized the tall, strong Swedish southpaw was a dangerous opponent.

“One thing you have to say about [Ben Davison] and the Tyson Fury camp – they never underestimated Otto Wallin,” Arum said during the post-fight press conference. “They don’t listen to what Eddie Hearn says. Right? They know Eddie Hearn doesn’t know sh*t about boxing. They knew Otto Wallin was a good fighter and would give it his all, which he did. And if they hadn’t have prepared that way, there would’ve been another winner tonight.” 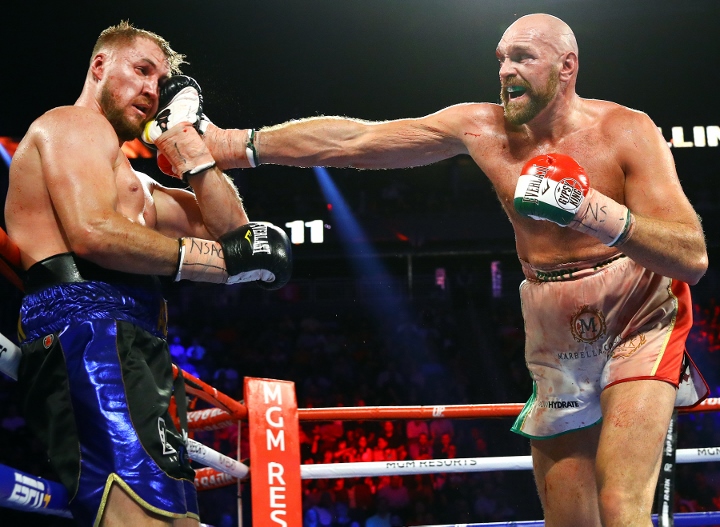 Wallin landed a straight left hand that stunned Fury 38 seconds into that final round. A resourceful Fury bobbed, weaved, backpedaled and held his way to the final bell.

“It’s one of those fights where, although we all know Tyson’s got the boxing ability and the skill set, sometimes you have to be able to fight as well,” Davison said. “And Tyson’s shown that he’s able to do that. … I knew that Otto could box. I knew that he had good pedigree. And I knew that he can make himself awkward.

He did underestimate him, until he got cut.

Fury such a bum he *****ed out on wilder and fought 2 nobody bums no one ever even heard of now he got a bump on his head wahhh wahhh. (otto) love that name, its so fierce. Say it with…

Fury showed a lot of heart and grit to fight on with the bad cuts. I would have to say though, on the evidence of that fight, that Wilder may knock Fury out in a rematch, and if might be…

[QUOTE=Dramacyde;20061724]Bob doing a lil damage control after watching his guy get lumped up by a Euro Bum[/QUOTE] Wallin would destroy any yank not named Wilder.

Fury is just lucky not to have said in the past he can beat Otto with one hand tied back, and after those cuts don't be surprise if Fury come out later to say he had his easiest fight against…