Arum: Crawford-Horn The Plan, Pacquiao in Another Direction

Eight division world champion Manny Pacquiao (59-7-2, 38 KOs), should he return in early 2018 as planned, will not be fighting WBO welterweight champion Jeff Horn in a rematch, according to the Filipino star's promoter Bob Arum of Top Rank.

Pacquiao was last seen in the ring back in July, when he lost a twelve round unanimous decision, and his WBO title, to Horn (17-0-1, 11 KOs). They fought before a crowd of over 51,000 in Brisbane, Australia.

A rematch was planned for the month of November - but it was later called off when Pacquiao cited scheduling conflicts with his full-time job as a senator in the Philippines. 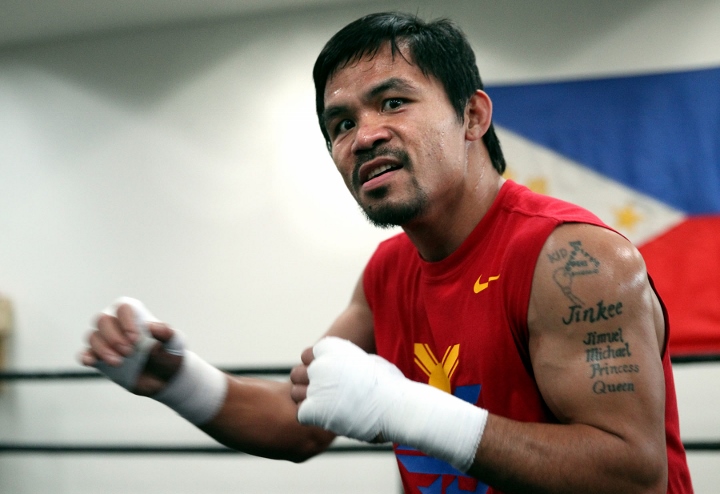 Horn will now make a voluntary defense of his title against UK fighter Gary Corcoran on December 13 in Australia.

The winner of Horn-Corcoran will have to make a mandatory title defense against Terence Crawford - pursuant to recent order from the World Boxing Organization.

Because of that, Pacquiao will go in another direction - should he return - against an opponent to be determined.

If Pacquiao wins his next fight, he would then have the option of facing the boxer who eventually ends up with the WBO title.

Arum, who also promotes Crawford and has options on Horn, explained the scenario of events for 2018.

"Horn is going to fight against the British fighter Gary Corcoran on December 13, in Brisbane, Australia in the evening and it will be broadcast in the United States in the early hours of that day, through ESPN," said Arum to ESPN Deportes.

"The winner of that match must make a mandatory defense against Terence Crawford. Meanwhile, Pacquiao is going to fight, or at least he plans to return to the ring at some point in 2018. And if he comes out with his hand raised, then he could make a fight with the winner between Crawford and Horn or Corcoran vs. Crawford."

[QUOTE=MisanthropicNY;18283701]I doubt Crawford agrees to fight in Australia... I see Crawford as another homeboy like Joy Sinclair and Beyonce...[/QUOTE] Crawford is no punk! He would go there to get the belt. Hus trainer already said they would do what they…

For Manny's sake if he were to face Crawford, please include/ add to the contract, no heads shots from Crawford, only body punches allowed after round 3 otherwise Manny suffers long term damage from BUD!

[QUOTE=MisanthropicNY;18283701]I doubt Crawford agrees to fight in Australia... I see Crawford as another homeboy like Joy Sinclair and Beyonce...[/QUOTE] Crawford has already went to Glasgow, Scotland and picked up a belt. Do you really think he won't travel to Australia…

Jeff Horn threw a wrench in Arum's plans for Pacquiao - Crawford. Now, in order to make everything in the world right again, Horn will take a pension fund fight (or pad his 401k) against Corcoran. Then he'll be sacrificed…