Each of those fights would afford Crawford an opportunity to add a welterweight title to the WBO crown he won from Jeff Horn on Saturday night at MGM Grand Garden Arena. A Crawford-Spence showdown is one of the most anticipated fights in boxing, assuming Spence gets past mandatory challenger Carlos Ocampo on Saturday night in Frisco, Texas (Showtime).

Crawford and his promoter, Bob Arum, would need to overcome network conflicts and other obstacles to make any of those fights. Spence, the IBF champ, Thurman, who owns the WBA title, and Garcia and Porter, who’ll fight for the WBC championship, all are advised by Al Haymon and fight for his Premier Boxing Champions organization, mostly on Showtime. 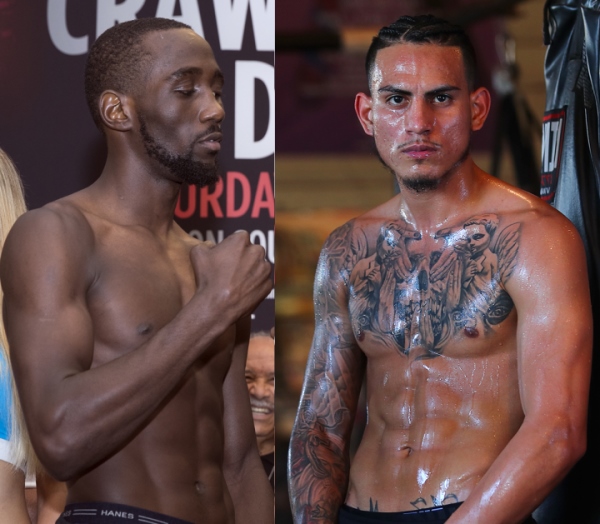 Arum and Haymon have put fights together – most notably Floyd Mayweather Jr.’s victory over Manny Pacquiao three years ago – and seemingly could do business again. Still, Crawford isn’t at all likely to face Spence, Thurman, Garcia or Porter next.

Jose Benavidez Jr. is the most logical candidate to challenge Crawford in the Omaha, Nebraska, native’s first defense of the WBO 147-pound championship.

Benavidez beat previously undefeated Frank Rojas (22-1, 21 KOs) by first-round knockout on the Crawford-Horn undercard Saturday night. The unbeaten Benavidez wants Crawford more than ever after their confrontation at the weigh-in for Benavidez’s previous fight, an eighth-round stoppage of Matthew Strode on February 3 in Corpus Christi, Texas.

Crawford (33-0, 24 KOs) and Phoenix’s Benavidez (27-0, 18 KOs) both are promoted by Arum’s Top Rank Inc. It’ll be easier, of course, for Arum to keep Crawford active by matching him against opponents his company promotes.

“Well, that’s certainly a possibility,” Arum said of Crawford-Benavidez during a post-fight press conference Saturday night. “The kid wants Terence and I don’t think it’ll be a difficult match to make. But I have to talk to his father and him, and also to Bo-Mac [Brian McIntyre, Crawford’s trainer/manager] and Terence. But certainly it’s a big possibility.”

When asked if Crawford-Benavidez would be next, Arum said, “I don’t know. Again, this fight’s over, we have to enjoy each had victories, and we’ll see on Monday.”

The 26-year-old Benavidez, a former WBA interim super lightweight champ, has won both of his bouts by knockout since returning from a gunshot wound. Benavidez suffered serious injuries to his right leg that threatened his career during that August 2016 incident in Phoenix.

Benavidez isn’t ranked among the WBO’s top 15 welterweight contenders, a requirement to fight for its world titles. The WBO could insert Benavidez into its next 147-pound ratings following his victory Saturday, though.

[QUOTE=Luilun;18865185]Than it’s a joke title fight hell Jose Benevides would beat both on the same night[/QUOTE]Call it what you want, but the winner will be called the "WBA Welterweight Champion of the World," just like Manuel Charr (Heavyweight), Denis Lebedev…

[QUOTE=Bronx2245;18863205]The "has beens" that are fighting for the WBA Championship! Hopefully that would help him get closer to a fight with Thurman! Gotta see the big picture![/QUOTE] Than it’s a joke title fight hell Jose Benevides would beat both on…

[QUOTE=Luilun;18862286]So in a perfect world he would fight the has beens[/QUOTE]The "has beens" that are fighting for the WBA Championship! Hopefully that would help him get closer to a fight with Thurman! Gotta see the big picture!

[QUOTE=Bronx2245;18860570]In a perfect world, Crawford would face the winner of Pacquiao vs. Matthysse, and Benavidez vs. Kavaliauskas would be on the undercard![/QUOTE] So in a perfect world he would fight the has beens

[QUOTE=Luilun;18859588]Bad blood creates better ratings. Here’s why people shouldn’t sleep on Benevides remember at 17 he put a boxing clinic on Pacquaio during a sparring match even though it was sparring he still beat his a$$ and that was a…