In the main event of the evening, a familiar guest came back to Ekaterinburg, in the heart of the Ural Mountains, for an unpleasant welcome again, as long-time Argentinean fringe contender Javier Francisco Maciel got beat by former amateur star Artem Chebotarev over ten rounds to lose a convincing unanimous decision.

Maciel was back to Russia seven and a half years after his first and only world title shot, when he had lost unanimously to Dmitry Pirog for the WBO middleweight title. This time he fought against multi-time European and world championship medalist for an intercontinental version of the same belt.

The fight was mostly fought the same in every one of the scheduled ten rounds: Chebotarev, 30, pressed forward, while the Argentinean, 34, bounced back from the ropes to try and land body shots. He was mostly unsuccessful - unlike the Russian, who delivered his share of the blows with artistry.

Maciel was close to be stopped in the closing two rounds of the fight, when he was hit several times with series of unanswered blows but managed to last till the final bell. It didn't help him, however, as he has lost a unanimous decision. 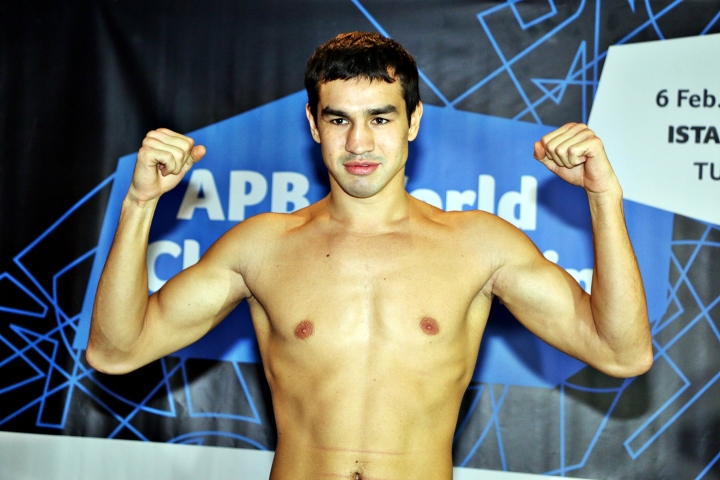 Super featherweight Mark "Canelo" Urvanov (14-2-1, 7 KOs) halted Jovylito Aligarbez's (16-5, 10 KOs) recent winning streak with a damaging, hurtful blow to the liver section midst into the third. The Pinoy import went down and was unable to get up in time, making it the third-round kayo for the Russian. The fight was even prior to that point. Time of stoppage was 1:40.

Chelokhsaev started fast and had Gazdhialiev down on a knee in the first round after a very hard head shot. Gadzhialiev slowly worked his way back into the fight and looked very solid in the middle rounds. Chelokhsaev, on the other hand, improved his performance in the closing rounds of the battle, landing more in the ninth and in the tenth rounds. At the end, all three judges had it tightly yet unanimously for Chelokhsaev: 96-93, 96-93, and 95-94.

Former Russian nationals amateur silver and bronze medalist Sergey "The Hooligan" Shigashev, with an overall record of 258-28 in unpaid ranks, worked hard through the guard of taller Argentinean German Ignacio Peralta (6-3-6) to get a close unanimous decision over eight rounds of two-way action. Shigashev improved his record to 9-0, with 4 KOs, scoring his second victory of 2018.

23-year old Russian super featherweight Vladislav Krasnoshein started his fight against Georgian journeyman Dato Nanava (9-9, 3 KOs) in an unpleasant way, losing the first couple of rounds. He later got back to the fight and, despite stern resistance from Nanava, managed to get a unanimous decision win over six rounds. No scores were announced, as Krasnoshein moved up to 6-0-1, 2 KOs.

Rising kayo artist Ravshanbek "The Prince" Umurzakov (6-0, 5 KOs) continued his stoppage series with the sixth-round technical knockout over Venezuelan import Kelly Figueroa (12-9-3, 7 KOs). Umurzakov started aggressively but got fatigued by the fourth. Figueroa looked solid at the mid-point of the fight but then the Uzbek Prince caught his second wind and got the job done midst into the sixth with a damaging left hand to the body.

Super featherweight Ruslan Kamilov continued his pro education with a dominating performance in an eight-round unanimous decision over Uzbek Burgut Xodzhiboyev (7-2, 3 KOs). After a slow start Kamilov improved his punch output and delivered enough to put Xodzhiboyev late in the third with a big overhand left to the head. He continued to stalk his opponent throughout remaning five rounds, easily toying with him during the eighth and last round. Kamilov improves his record to 5-0, 3 KOs, despite a bad cut at the left side of his forehead.

Super featherweight Kyrgyz native Dastanbek Imankaziev drained his opponent Evgueny Lyashkov's gas tanks in the first and pushed the Russian to his limit in the second, up until a moment Lyashkov's corner has thrown in a towel at 2:24. 19-year old Lyashkov has suffered his first career loss, while Imankaziev goes up to 2-0, 1 KO.

Russia-based Uzbek super bantamweight Mukhammad Shekhov (2-0, 1 KOs) delivered a huge liver blow to put his homeland-based compatriot Sherzod Yuldashev (3-2) down for a count at 2:44 of the second round.

Former Moscow junior amateur champion Vladimir Myshev moved up to 7-0, 4 KOs, finishing off Romanian journeyman Oszkar Fiko at 2:40 of the second round. Myshev cut Fiko over his right eye in the first, badly hurt him with a series of body shots in the secondm and then dropped him thrice consequently with damaging liver shots. The final touch and the fourth knockdown was produced by a heavy right bomb that caught Fiko flush on his chin. The Romanian is down to 32-26-1, 17 KOs.

Another Diaz-trained Uzbek fighter Elnur Abduraimov improved his record to 3-0, 3 KOs, with an easy stoppage of considerably more experienced Brazilian Aelio "Biro" Mesquita (17-3, 15 KOs). Abduraimov jumped on his opponent right away and soon decked him with a fusilade of the blows, the ending touch being his overhand right to the temple. Mesquita unwillingly rose on unsteady legs but was soon down again, this time for a count. He was been previously stopped in two by Shakur Stevenson in June 2018; Abduraimov has done his job faster - at 1:44 of the first round.

The Uzbek welterweight Makhmud Gaipov made a strong pro debut, stopping Tanzanian import Iddi Mkwera (8-2-1, 5 KOs) at 2:06 of the third round. The Joel Diaz-trained fighter dropped Mkwera a couple of times in the first two rounds, and got the job done in the third, decking the African twice more with huge, solid right hands. The Tanzanian got up after the second knockdown but was stopped on his feet almost right after that following another barrage of Gaipov's punches. Mkwera was also down for a very long count in between the knockdowns following a low blow from Gaipov, which, hasn't resulted in any point deductions however.